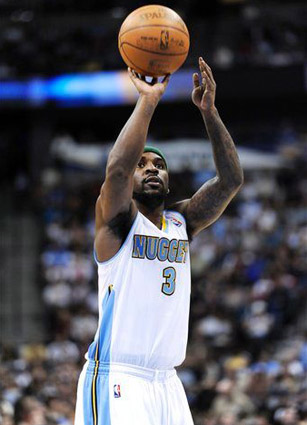 At this point in the Hawks’ season, it looks like the playoffs will be more of a punishment than a reward. Atlanta lost their 4th game in a row as the Wizards were on the opposite end of a blowout for once, Andray Blatche leading the charge with 23 points. John Wall added 19 points and 7 assists for Washington, who sprinted to an early 16-6 lead and still managed to extend the lead despite playing two D-League immigrants. Al Horford had 21 points and 10 rebounds but the rest of the Hawks treated the game like addressing a speeding ticket – you show up, go through the motions, and don’t expect a happy ending.

The injured Nuggets needed a pick-me-up as they’re likely heading towards a gruelling playoff series against the Thunder. Ty Lawson received the memo and delivered by pouring in a career-high 37 points against the Wolves. Lawson was his own cavalry, hitting his first 10 three-pointers (!!!) that turned a close game into a comfortable win for Denver. A 10-0 scoring binge saw Lawson hit another two three’s as the Nuggets went up by 30 points and never looked back in the 3rd quarter. Denver set a franchise record on their performance beyond the arc (19-of-38) while the Wolves were shell shocked, deciding to save the effort for next season (it carries over, right?).

The Rockets defeated the Clippers one night after being eliminated from playoff contention, led by Chase Budinger’s 16 points. Six Houston players scored in double figures as the team took control of the game in a key 22-9 run in the 2nd quarter that inched the game closer to “blowout” than “frantic finish” on the League Pass Alert scale. L.A. shot just 34% as Blake Griffin (13 points, 10 rebounds) struggled on offense, finishing 6-of-18 from the field while Eric Gordon led the Clippers with 19 points. No matter how good Patrick Patterson’s block looked against Griffin, it’s still a foul in slow-motion replay.

There’s a first time for everything. Drew Gooden put up his first triple-double with 15 points, 13 rebounds and 13 assists as the Bucks beat the Cavs down the stretch. John Salmons added 32 points, holding off the Cavs who made a late run to trim the lead to 4 points before Salmons answered with a jumper off glass. Baron Davis scored 19 points and dished 6 assists for Cleveland, who were lethargic for the first two quarters and missed shots that would have made for a closer game, had the effort been consistent.

The Spurs won their 4th game in a row, with seven players in double figures as they beat the Jazz. Richard Jefferson scored 20 points and seven players contributed double-digit scoring nights as Gregg Popovich began to rest his stars for next week. Al Jefferson scored 23 points, and George Hill dunked on the Jazz, who have lost 10 of their last 11 games. The Spurs are one and a half games ahead of the Bulls for the best record in the league. Chris Quinn still as time to make some MVP noise!

Separated at Birth of the day: Mark Cuban and Emperor Commodus.

This is my last Post Up of the season, and I just wanted to thank SLAM for giving me this opportunity. All writers put in a tremendous amount of work to give the SLAM family the best content available, and I have enjoyed being part of the process.

Now who’s ready for the Playoffs?