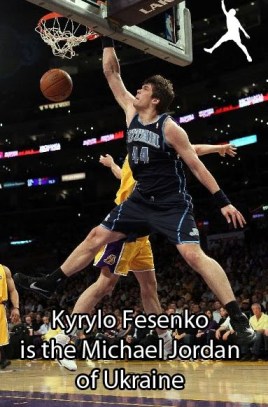 Before we begin on the latest updates around the league, I have a word of advice to NBA fans: don’t check the standings. From now on until mid-April, the playoff positions will probably switch by the time I finish typing this sentence so save yourself the madness.

There are few iron-clad facts in life. The Earth is round, Ke$ha is awful, and the Golden State Warriors had no business winning this basketball game. Down 21 points to the Magic, the Warriors decided to give Orlando a taste of its own long-distance medicine. Punching in the cheat code for made three’s, the Warriors set a new franchise record with 21 made triples (35 attempts), out-shooting the Magic who made 15 of their 32 three-pointers. Dorell Wright started the comeback by scoring 16 of his 32 points in the 3rd quarter (8-of-11 from deep) and Monta Ellis led the way with 39 points and 11 assists while his back court mate Steph Curry added 22 points and 12 assists. Jason Richardson (30 points) and Jameer Nelson (24 points) were the only Magic players keeping their team in the game, draining shot after shot over the Warriors’ interpretation of defense. Some bad turnovers from both teams led to a stalemate before the drama resumed in overtime, Ellis corkscrewing around defenders for an and-1 finish with his left hand. After another Richardson three-pointer, Nelson stole the inbound pass and headed straight for the hole before being called for an offensive foul after running over Ellis who iced the game with two more free throws. Orlando went cold at the wrong time as they missed two more looks from distance, allowing the Warriors to emerge victorious. Did you see that dream shake that Curry put on Dwight? Bend it like Hakeem, young fella! Watch these high-action shootout Warriors while you can, because the movie stops playing in April.

Despite feelings of disrespect from Gerald Wallace, his personal revenge game was not to be as Stephen Jackson’s return heralded the Bobcats back into the winning side of the standings. Action Jackson scored 18 of his 29 points in the 4th quarter including a decisive three-point play in the final minute of the game to cut the Blazers‘ rally short. Wallace had 13 points and 9 rebounds while Wes Matthews added 20 but missed a free throw with 5.6 seconds to play that would have cut Charlotte’s lead to 1. Some more missed free throws and a sloppy turnover later, the Blazers’ 4-game winning streak came to an end. The Bobcats are tied with the Pacers for the last playoff spot in the East.

The Nets continue their questionable surge up the standings (4 straight wins) as they beat the Clippers in overtime. Brook Lopez and Jordan Farmar both scored 24 points including all 8 of New Jersey’s overtime buckets as the Nets rallied to beat the Blakers. Kris Humphries had 19 points and a career-high 20 rebounds as the Nets came back from a 20-point deficit while grounding Blake Griffin (23 points, 9 rebounds) by drawing 2 charges in OT. Griffin didn’t help matters when he missed a free throw with 1.2 seconds to play, sending the game into overtime. Chris Kaman had a strong game with 23 points and 10 rebounds but the Clippers let the game slip away from them in the second half. SlamadaBlake of the day: the rim reaper soares with the left hand.

The Philadelphia Sixers took the fight to the Celtics and won, controlling the game in a decisive 4th quarter and beat Boston at home for the first time since 2004. Spencer Hawes led the balanced Sixers with 14 points and 10 rebounds while his team held Boston by double digits as the Celtics missed 8 straight shots in 6 minutes in the final quarter. Nenad Krstic had 16 points and 15 rebounds and Green had 18 points off the bench but the big three (is that saying worn out yet?) had an off night and couldn’t close within 2 points of the Sixers. A balanced team with Iguodala playing the point forward and flirting with triple-doubles on a nightly basis, who wants to see this team in the playoffs?

Leandro Barbosa scored a season-high 29 points to lead the Raptors over the Pacers. Indiana dropped their 6th straight game while Danny Granger (25 points) started some beef with Barbosa. With Toronto leading by 10, Barbosa drove to the rim and ignored the common courtesy to dribble out the clock as Granger got in his face. “If I was on him, I would have took his head off and I would have been suspended for a game for a flagrant foul” Granger said post-game. As usual, my stance on this kind of mini-beef is that if you’re mad at the other team for continuing to play, you’re probably not playing hard enough yourself.

The Chicago Bulls now sit just a half game behind the East’s top seed as they beat the Hawks despite missing Carlos “block magnet” Boozer. Derrick Rose conducted his MVP train with 34 points, shaking off a bad shooting night by making a living at the free throw line (14-of-15 made) while Luol Deng added 18 points, 9 rebounds, and 7 assists. Rose scored 18 points in a decisive 3rd quarter as the Bulls outscored the Hawks 24-10 to take a 12-point lead into the final period. Joe Johnson scored 16 points for the Hawks who suffered their lowest-scoring quarter of the season and could not regain their previous momentum.

Kevin Love and Michael Beasley game Minnesota fans a glimmer of hope as the Wolves blew out the Jazz. Love had 24 points and 12 rebounds, continuing his double-double streak while Beasley added 23 points. Even Darko go into the fun, shutting down Jefferson (9 points, 9 boards) on his way to 14 points and 6 rebounds. Gordon Hayward led the Jazz with 18 off the bench.

After the Thunder traded Jeff Green, they knew that they were losing a spark off the bench. Luckily, James Harden is filling in that role nicely (just hold off on the sparks around his beard). Harden scored 22 points to help Durant (24 points) and company hold off the Pistons. Rip Hamilton scored 20 points for the misfiring Pistons who got within 4 points in the 3rd quarter before the Thunder silenced them with key shots including back-to-back three-pointers by Harden to take a comfortable lead.  Harden is averaging 17.7 points a game in his last 10, increasing his scoring from his season average of 10.3 points. Westbrook (13 points, 11 assists) became the 5th player to reach 4,000 points, 1,500 assists, and 1,000 rebounds in his first three years in the league. He is now in the company of Oscar Robertson, Penny Hardaway, Chris Paul, and LeBron James (back when he was liked).

The league-leading Spurs survived a surge from the Kings as they earned with number 53. Tony Parker scored 27 points as the Spurs came back from a 3-point deficit and closed the game on a 17-2 run. Manu Ginobili added 24 points but couldn’t destroy another bat that circled the arena. The Argentinian Batman hit a pair of three-pointers to tie the game and eventually add to San Antonio’s lead while the role players followed suit, scoring 16 points from there on. Omri Casspi had 16 for Sacramento Power Balancers.

Separated at Birth of the day: Gregg Popovich and Jigsaw.

I bought a special edition SLAM UPS issue from Ebay autographed by Allen Iverson. I’m very happy with the issue (and hope there are more poster-packed issues ahead), but I can’t get that it only cost me $30. If AI were still in the league you’d have to pay triple digits minimum for any autographed merchandise. He should sign with Miami next season, it’s not like their team chemistry can get worse anyway.

All criticism aside, LeBron’s upcoming playoff shoes are amazing.

Speaking of amazing, we finally get a behind-the-scenes look at Steve Nash’s time-travelling NBA commercial.

I can’t get over how epic Beasley’s fro is.

When fans say Ray Allen’s jumper is picture-perfect, this is what they mean.

A great feature about Monta Ellis and his family life.