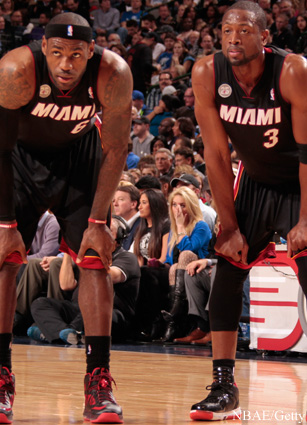 The Thunder came in riding a 12-game win streak but were playing on the second night of a back-to-back on the road and the fatigue caught up to them. The Wolves led wire-to-wire and dominated the Thunder with a beautiful pick and roll attack executed to perfection by Alexey Shved and Nikola Pekovic. The underrated center scored 24 points on 10-14 shooting and grabbed 10 boards while Shved tallied a career-high 12 dimes to go along with 12 points. After trailing by 14, the Thunder came back in the fourth and cut the lead to one. With the Thunder on the ropes, J.J. Barea came out swingin’, scoring 14 points in four minutes to give the Wolves an 11-point lead with five and half minutes left. OKC kept fighting but Minnesota hit their free throws down the stretch to hang on.

— Ricky Rubio tweaked his non-injured knee and came up limping.

The Heat absolutely beat down on the Mavs in Dallas last night, leading by as many as 36 for an easy Thursday night drubbing. After taking a 6-4 lead in the first, the Heat led for the next three quarters. LeBron scored 24 points to put his streak of 20+ scoring nights at 23, the longest such streak to start a season since Karl Malone’s 24-game streak during the 1989-’90 season. LeBron also grabbed 9 boards and dropped 5 dimes. Dwyane Wade scored 19 points and dropped six dimes while Chris Bosh chipped in with 17.

— Johnny Football was sitting courtside for the second night in a row. Myck Kabongo gets suspended for the year yet nothing is made of a 2o year-old presumably broke college student athlete sitting in the most expensive seats in the house two nights in a row. NCAA is on some bullshit.

It wasn’t about the shots that were made in this one, but rather the shots that missed. Denver shot an unbelievable 0-22 from three-point range (coincidentally breaking the Blazers record of 0-20 set just last week against the Raptors) and scored 74 of their points in the paint. With the Nuggets struggling from the field, Portland was able to pull ahead by 18 in the first half and led the rest of the way. In the fourth, Andre Miller hit a tough fade-away to cut the deficit to three with four minutes remaining. The Nuggets were able to cut it to one but Miller fouled Nicolas Batum on a three-point attempt. Batum hit all three freebies to make it an 87-83 game. Wes Matthews’ three with a minute and a half left pushed the Blazers’ lead back to double-digits and put Denver away for good.

— J.J. Hickson had a monster game with 18 points and 18 boards. Dame Lillard scored 12 and dropped 10 dimes and Batum led all scorers with 22.