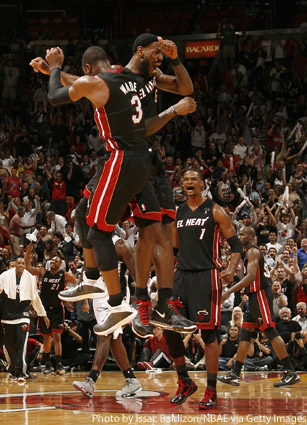 A quick Public Service Announcement: I (Adam) was told a day or so ago that the great Ryan Jones was going to be in Miami for the Heat-Spurs game, and with an early flight this morning, he wouldn’t have enough time to churn out a full Game Notes—but would have the time to hook me up with a little recap for The Post Up. Since I’m not completely insane, I said it was cool, and that the always-welcoming readers and commenters at TPU would feel the same. So here’s Ryan’s Miami-San Antonio recap, followed by my shorter write-ups of the other contests, which, something tells me, you guys won’t want to talk about very much. (Whatup, Eboy!) And a huge thanks goes out to Ryan for his contribution. Very appreciated.

A little more than 48 hours after they hammered the short-handed Grizzlies by 33 points, and a couple days more since they edged the Lakers in Kobebryantweirdpostgameshootaroundgate™, the Heat hosted the Spurs looking to avenge their worst loss of the season.

Miami steadily built and extended an early lead Monday night, and while the cynics waited for a late-game collapse that seemed (to some) inevitable, the Heat just kept building. If they’d played eight quarters at the AAA, Miami would’ve won by 80. It was that kind of night.

I missed Pop’s postgame presser (I write this assuming no media egos were irreparably harmed), but the talk from the Heat was all about perspective. Eric Spoelstra opened his postgame comments like this: “Just keep on plugging away—that’s what tonight’s game was about.”

Added LeBron: “We can’t linger on this too much. It’s definitely a good win, but we can’t celebrate now. We gotta stay the course and continue to improve like we’ve been doing.”

If the Heat really, truly are buying into Spo’s mantra—relentlessness on defense, trust on offense, and possession-by-possession consistency on both ends—they will be damn near impossible to beat. But of course, it rarely works out that way. Especially not in April, May and June. It’s gonna be really interesting to see what this team can do over the next month or two (or three).

“I’m sure some people now will jump slowly on the bandwagon,” Spoelstra said. “But it’s not about that for us.”

Maybe not, but the weight of the Miami Heat bandwagon is as good an indicator as any of what this team is up to. This week, at least, it should be at capacity.

One night after holding the Bucks to 56 points, the Celts held the Nets to a respectable 88, but only scored 79. Guessing all that defense 24 hours earlier wore them out a little. This marks Boston’s third loss in four games, which qualifies as a mini-funk in my book. New Jersey, meanwhile, has won five (!) in a row, and somehow sits just five and a half games out of postseason positioning. Sure, five and a half is kind of a lot, but when you consider all the Nets have gone through, it’s wild that another big streak (or just this current streak repeated one more time) could lead to them potentially competing for the eighth spot. But yeah, probably not. The Bulls are now tied with Boston atop the East, and chances are they’ll commandeer that top position, if only because A: They have an easier remaining schedule than the Celts do, and B: They’re younger and don’t need the same pre-Playoff rest. Not the best loss for Doc Rivers’ guys.

Kendrick Perkins! (20 minutes, 6 points, 9 boards.) The Oklahoma City Thunder. You never heard of them, huh? You gonna be playing for them for the next five years. You’re gonna play with some of the best young players in the world, like Russell Westbrook (18 points, 12 dimes), Serge Ibaka (10 points, 8 blocks). I know, those names mean nothing to you now. But they will.

They’re gonna love you in OKC.

The Grizz ended a two-game skid with a home win against the Clips, led by Zach Randolph (30 points, 12 boards) and a team-wide 53.6 percent shooting night from the field. Also, Greivis Vasquez dropped a subtle 11 (on 5-8 shooting), with 4 dimes and a +11 plus/minus. With OJ Mayo seemingly m.i.a., he’d be a nice addition to a Memphis postseason push.

That Melo trade awoke some kind of beast, huh? Tar Heel bros Ty Lawson and Raymond Felton combined for 45, while the Nugs won their third in a row and sixth outta their last seven.

Jared Dudley’s buzzer-beating, for-the-win attempt didn’t fall, and the Suns couldn’t close a late rally to get ahead of the Rockets. Kevin Martin scored a game-high 23.

All five Jazz starters scored in double-figures, and after a late Sixers tear forced OT, Utah closed Philly out and held on for the victory. Andre Iguodala (23 points) & Co. missed a good opportunity to jump up next to the Knicks, but the L means they’re now a full game back at the seven spot, one position behind NYK.

Kings guard Marcus Thornton went off, dropping 42 and leading Sacto to a home win against the visiting Warriors. That 42 is a career-high, as you could imagine. Also, Samuel Dalembert: 27 points, 16 rebounds.

The Lakers are in prepare-for-the-Playoffs mode, which means they’re focused on mowing down just about anything in their path. Sorry, Magic. Pau Gasol scored a game-high 23, as L.A. played a great final quarter and jumped ahead to earn the W, the team’s second in a row. The Lake Show’s still perfect since the All-Star break, with the exception of that one notable lapse versus Miami.