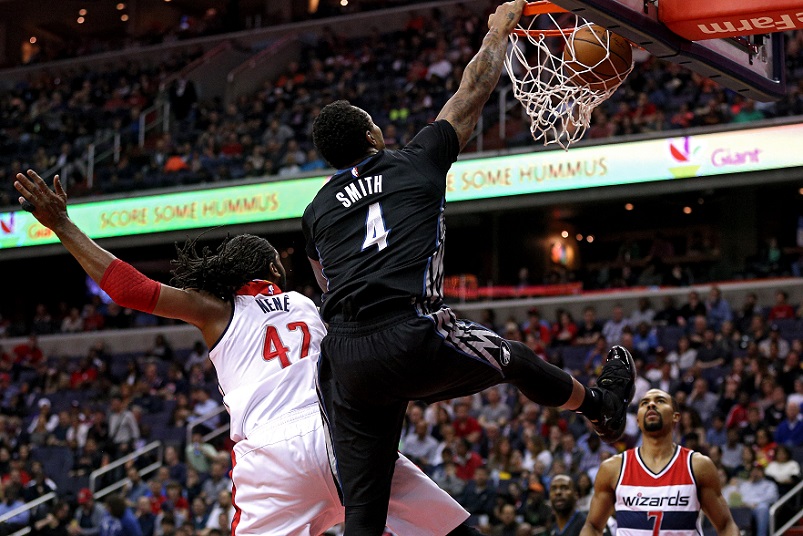 The T-Wolves haven’t been able to produce a successful 2015-16 campaign on the whole, but the team’s young talent played to their potential in a back-and-forth 2OT victory over Washington. Karl-Anthony Towns and Zach LaVine combined for 52 points, while Gorgui Dieng hit a game-tying trey in a win that bumped the Wizards to 3.5 games behind the eighth seed of the Eastern Conference.

Despite an impressive 22-point, 16-assist night from John Wall, and 26 points from Bradley Beal, this may be remembered as the loss that (unofficially) eliminated the Wizards from playoff contention.

“Pretty devastating,” Wall said of the loss. “We know how important it was. Probably the game of the year.”

“It’s a horrible loss, just plain and simple,” Beal said. “There’s no explanation about it. We shouldn’t have lost that game.”

Stephen Curry and the Warriors presented David Lee with his 2014-15 championship ring before the game, showing respect to the role player who averaged 7.9 points with 5.2 rebounds last season in Golden State.

Once the game started, however, it was business as usual for the Warriors, as Klay Thompson lit up Dallas for 40 points while Steph Curry (33 points, eight rebounds, eight assists) did Steph Curry things. With the W, Golden State has now set the all-time NBA record for most three-pointers (934) in a season.

Stephen Curry at the buzzer 👌https://t.co/3LGfyme237

The Lakers weren’t without moral victories in Friday’s defeat. Julius Randle posted an improbable triple-double, recording 13 points with 18 boards and 10 dimes. What’s more, Kobe Bryant looked his old self, adding 28 points on 45.4 percent shooting. The Nuggets’ second unit poured it on, however, as Will Barton, Jusuf Nurkic, and D.J. Augustin combined for 54 points in Denver’s second consecutive W. D’Angelo Russell, who departed the game with an apparent ankle injury, may not miss time due to the ailment.

D’Angelo Russell has a moderate sprain of his right ankle. X-Rays were negative. He’s out for tonight, will be re-evaluated tomorrow.

The Pistons maintained their grasp on the eighth seed of the Eastern Conference, riding Marcus Morris and KCP’s combined 41 points to their fifth-straight W. Forgoing a conventional rotation, Charlotte head coach Steve Clifford gave minutes to each of his 13 players, yielding mixed results. Kemba Walker dropped 29 points, but the team shot 39.8 percent overall while getting out-rebounded 62-42.

Goran Dragic completed his first dunk as a member of the Heat, capturing the imagination of those in attendance at the AmericanAirlines Arena. Meanwhile, Hassan Whiteside continues to make a case for a max contract, as the big man notched 26 points with 12 boards off the bench, helping Miami improve to a 3-1 mark over their last four games.

The Hawks were seemingly dunking at will against the scuffling Bucks, as Milwaukee fell to a dismal 9-29 on the road this season. Jeff Teague’s 12 fourth quarter points helped solidify Atlanta’s second straight victory.

Mike Scott dropping the hammer on this one-handed slam!https://t.co/p3x9m6JsHo

NBA officials showed birthday boy Kyle Lowry no love, ejecting the two-time All-Star in the final moments of the fourth quarter. The Rockets narrowly held on to victory despite a triple-double from James Harden and a 21-point showing from Michael Beasley.

Another night, another Spurs victory at home. Coach Gregg Popovich’s squad remained perfect at the AT&T Center despite 20 points from JaMychal Green and 17 from Lance Stephenson. With Patty Mills and Danny Green each receiving nights of rest, Kyle Anderson and Kevin Martin each received extended looks.

33-year-old Kevin Martin is the youngest player on the court right now for the Spurs.

DeMarcus Cousins led the way in Sacramento’s rout of the Suns, as Boogie totaled 29 points with 11 boards while Willie Cauley-Stein pitched in with a career-high 26 points. Seth Curry scored 12 points, including this smooth floater early on:

Great to see @alantwilliams get his first FG for the team he grew up watching. #SunsAtKings