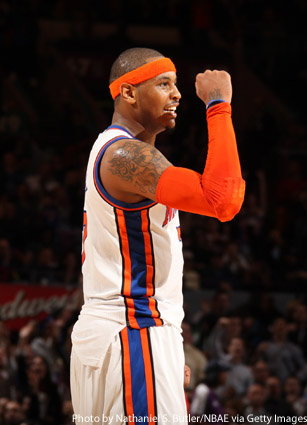 The Knicks still have a ways to go before anyone will be talking or even thinking about them contending through a Playoff series, but this second straight win definitely has them back on track, further removed from the big losing streak that’s now thoroughly removed from fans’ minds. Down 16 early on, the Knicks powered back then hung on during the stretch, earning the win over their cross-river rival Nets. Carmelo Anthony (39 points, 10 boards) was an animal, finishing time after time on the offensive end, while Chauncey Billups (33 points) and Amar’e Stoudemire (23 points) (and, um, nobody else) provided the majority of NYK’s offensive production. The sharpshooting Anthony Morrow led the Nets with 30.

After “Why Always?” Boris Diaw came up big for the ‘Cats in the fourth, the Cavs held possession of the ball and a chance to win with under 10 ticks remaining, but an Anthony Parker runner came up short and Cleveland fell. Charlotte has now won four straight and seems to be eying a spot in the postseason, though they’re still a full game back of the Pacers. Speaking of…

Every game counts from here out for Indiana, who defeated the Pistons easily behind Darren Collison’s game-high 20. The Pacers will host Milwaukee Friday, when two (should-be) Playoff-hungry squads will face off.

In what was most likely a first-round preview, the Hawks showed they could potentially contend with their to-be postseason opponent, as they took down the Magic after Jameer Nelson missed a pair of game-tying opportunities late. The question now is: Could the Hawks push a series with Orlando to six or seven games? Could they win?

James, Wade and Bosh combined for 94, and the Heat rolled by the Wizards in DC. Despite the lack of help from his teammates, Jordan Crawford dropped a whopping 39, impressive given the occasionally-great Miami D. After an aggressive second quarter rebound, John Wall and Big Z through some elbows and fists at each other (true story, see video below), the result being the ejections of JW, Ilgauskas and Juwan Howard.

Even if the Knicks do catch a pre-Playoff fire, the Sixers are doing everything in their power to lock up their sixth spot and keep the momentum they’ve built over a long and impressive season. They put a damper in Houston’s postseason chances last night too, defeating them at home and shooting 54.1 percent from the field as a team. Five Philly guys scored in double figures.

I didn’t realize today was officially The Eastern Playoff Race Becomes Interesting Day, but it is, so celebrate accordingly. Toiling three games out of contention, the Bucks still have might have a decent run left in ’em, and they’ll attempt to build on this victory in Toronto and get moving. Two nights removed from a dreadful fourth quarter performance, Brandon Jennings bounced back with a game-high 25.

Kevin Love is back on the floor, but it mattered not against the top-ranked Bulls, who knocked down the TWolves and sent them to their eighth straight loss. DRose went for 23 points and 10 dimes, while Carlos Boozer put up a solid 24-point, 14-rebound effort.

Though the East heated up, the West seems pretty set: The Grizzlies are in; everyone else is out. Memphis won easily last night, as nobody on the Warriors bested 16 points and they allowed the Grizz to shoot 56.5 percent (!) from the floor. Tony Allen led all scorers with 21, and Memphis secured a three-game lead on the Rockets and a five and a half game lead on the Suns.

Without David West to lean on, Carl Landry (21 points) and Willie Green (12 points) stepped up, providing the fuel for a fourth quarter outburst that helped the Bees scoot past the Blazers in the West. Both of these teams may be headed for a rough first round, but at the six spot, New Orleans would face Dallas, while the owner of seventh place gets to play the Lakers (or the Spurs, potentially). So yeah, the positioning advantage will help. LaMarcus Aldridge scored the game-high of 24.

One group that doesn’t seem to be willing to give up its spot is Denver, who has a two and a half game hold on the five spot that was boosted by this victory. The Kings were no match for the Nugs, who had six guys in double figures, led by Ty Lawson’s 20. Marcus Thornton dropped 27 for Sacto.

An easy win for the Thunder. They shot 53.8 percent from the field, led by James Harden and Kevin Durant, who scored 22 each. A strangely rejuvenated Vince Carter put in 28 for Phoenix.

Blake Griffin broke out for 25 and 17, but Dallas hung on for the win, the squad’s fifth straight. The Mavs won’t have to travel far to face the Lakers tonight, but they might have to focus a little harder, because that same output won’t do as well against Kobe and friends as it did the Clippers.

Last Call: The aforementioned Wall-Ilgauskas scuffle. This has to rank pretty high up there for most unlikely pair to be throwing down with each other.