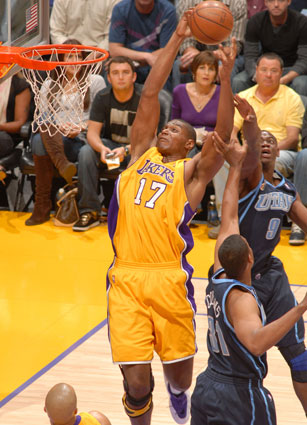 Although  we’ve come to the end of the road, I can’t let go…

I cannot let go of the regular season yet, it can’t be the Last-Day-of-the-Regular-Season Eve, and yet it is.

Pretty crazy. From LA and Boston picking up where they had left off, Cleveland shocking everyone and the Magic finding a way to survive without Jameer Nelson, this season has been a crazy one with so many teams having successful seasons. I still can’t believe the Cavs have 66 wins. 66!

I love how the Lakers have been the only team to get a victory on Cleveland’s homecourt. You know I want to see that finals matchup.

Imagine the intrigue and the hype that would surround that.

If you havent’ seen it, this video of LeBron working out before the Celtics Game is pretty wild. Bron fan, in need of workout inspiration, etc., I watched this entire thing, and didnt even wish for the 11:43 seconds back. Loved the music choice as well. This man is one ridiculously strong guy.

So, with a loss, the Sixers have to wait for the Raptors to take down the Bulls (which I don’t see happening), and also get a win in Cleveland (also, a long shot), or they’ll be facing the Celtics in the first round.

The Lakers/Jazz first-round series had their preview last night, in the final game of the season for both teams. LA allowed the Jazz to stay comfortable until late in the third where they pulled away with ease. Nice to see Byum continue to get his footing.

Happy Leon Powe is back for the playoffs, as well.

The Hawks got the W against the Heat, but many of the starters for both teams sat this one out. Speedy Claxton’s twittering about not playing seemed to work as he had his first minutes since 2007. Claxton had one point on the season for his 5.7 million dollar salary. Not bad.

Huge night tonight with 14 games on the schedule. Be sure to stay in and watch the final night of the regular season. There’s sure to be lots of crazy moments as teams try their best to get those W’s to wrap up their seasons.

Last night the Hawks pulled off the 81-79 victory over the Heat. This was a game that served as a preview of their first-round matchup, but was played mostly with role playesr and the benches of each team. Dwyane Wade, Joe Johnson, Jermaine O’Neal, Udonis Haslem, Maurice Evans and Zaza Pachuila all sat the game out, while Michael Beasley led the Heat with 23 points and 14 rebounds n the loss. While the game was tied going into the fourth, the Heat went were unable to score for the first four and a half minutes of the final quarter and the Hawks took the lead and did not give it up. Mario Chalmers had 15 points for the Heat and James Jones added 10. Marvin Williams returned to the floor for the Hawks and he had 13 points, as Flip Murray scored 17 in the victory.

Boston found themselves in a battle with Philly, but were able to pull out the 100-98 win, thanks to holding the Sixers to just 15 points in the final 12 minutes of the game. Without Kevin Garnett and Ray Allen, it was Paul Piere who did the heavy lifting for Boston, scoring 31 on the night and nailing what would be the game-winning jumper to break the Sixers’ back. While they trailed by 11 in the second half, the Celtics calmly came back and Philadelphia could not keep up down the stretch, even as Boston relied heavily on their bench. With the loss, the Sixers now have to hope that they can win tonight in Cleveland and that the Raptors can beat the Bulls in Chicago, if they’d like a chance to move into the sixth seed and avoid a first-round matchup with these Celtics. Tony Allen scored 18 for Boston and Leon Powe had 10. Glen Davis added 15 off of the bench. Andre Igoudala scored 25 points for the Sixers, and dished 7 assists. Andre Miller had 15 points and 9 assists and Thaddeus Young scored 18.

The Lakers met up with the Jazz last night for what will be their first-round matchup. Things were tight until late in the third when the Lakers used a 16-9 run to go into the fourth up, eight. Then, to kick things off in the final twelve minutes, they reeled off a 13-2 run and led 104-85 by the end of it. It was as if they were simply toying with Utah in the first half, allowing them to keep it close before deciding to close it out in the second. LA won despite shooting 24 free throw attempts to the 47 that they gave up to the Jazz. Pau Gasol led the way for the Lakers with 20 points, 9 rebounds and 6 assists. Andre Bynum scored 22 while Kobe Bryant and Lamar Odom had 16 piece apiece. Deron Williams had 25 points and 13 assists for Utah. Andrei Kirilenko scored 20 off of the bench and Paul Millsap added 10. Carlos Boozer scored 16 in the loss.