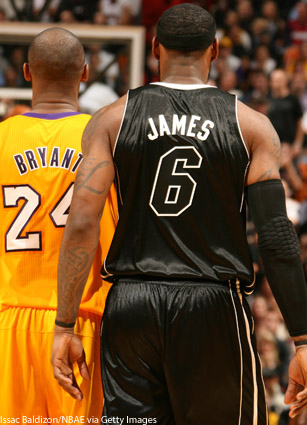 Only three games last night, and I’m betting you paid extra attention to one in particular. Miami rocked the brand new black-on-black alternate jerseys, which frankly looked sorta bootleg, especially with L.A. in their home unis. Then the Champs escaped Utah with a win, and the Hornets-Rockets game I made fun of was actually kinda awesome. Let’s recap, shall we?

Kevin Martin scored 27 of his 35 points in the first half to help the Rockets jump out to a 9-point halftime lead, but the Hornets stormed back and forced overtime after a franchise-low 7 points from Houston in the fourth quarter. The Rockets shot 3 of 21 in the fourth quarter, and Jarret Jack (15 points, 7 rebounds, 5 assists) had a chance to win the game on a pair of free throws with less than 20 seconds to play, but made only one, sending the game to OT. New Orleans scored the first five points of the extra period, but Houston responded with a 5-0 run of its own. In the closing moments, Kevin Martin came up with a loose ball, pushed the ball upcourt, and Samuel Dalembert slammed home a KMart missed layup with 11 seconds left for the win. The game-winner was part of a 17-rebounds, 15-point performance for Dalembert, who’s played exceptional ball since finding a rhythm with the Rockets. Kyle Lowry chipped in a typical 10/9/8 line, Courtney Lee had 17 points off the bench and Houston overcame 19 turnovers to improve to 8-7, and 6-1 at home.

Hmm, that was easy. Even without Dwyane Wade in uniform, the Heat laid the smackdown on the Lakers, putting the game out of reach by halftime. At the break, the Lakers trailed 52-37, and LeBron James had already racked up 13 points, 6 dimes and 4 boards. In the first half, 21 of the Lakers’ 37 points came from bigs Pau Gasol and Andrew Bynum, and Los Angeles shot 13-of-42 as a team, good for 31 percent—not good. It proved to be too big a hole to dig out of, despite 14 of Kobe Bryant’s 24 points coming in the fourth quarter, a season-high 26 points from Gasol and another double-double from Bynum (15 x 12). LeBron finished with a ridiculous 31 points, 8 assists and 8 rebounds, singlehandedly pacing Miami and putting together his own personal highlight reel for the night: defense, more defense, defense to offense, fast break, hustle. But the big news from this game, and I do mean big, was the Eddy Curry sighting. Ed looked a bit lost out there on defense, but he found himself in the right place at the right time on a couple offensive possessions, finishing with 6 points and 3 rebounds in his 6 minutes of action. Miami is now 5-0 when DWade doesn’t play—that means nothing, probably, maybe, obviously, kinda, sorta, but I thought it was worth mentioning.

Shawn Marion (22) and Roddy Beaubois (17) posted season-highs in points for Dallas, and the Mavs shot 52 percent from the field, to take out one of the NBA’s hottest and most surprising teams in Utah. The Jazz got big-time games from the beef up front—Al Jefferson had 22 points and 9 boards, while Paul Millsap had 16 and 13—but shot 39 percent as a team and broke down defensively in the second and fourth quarters. Utah forward Derrick Favors was ejected after a couple run-ins with Dirk Nowitzki and a tough illegal screen call. He left with just 2 points, 2 rebounds and 4 turnovers in 10 minutes on the court. Dirk, for his part, shot 5-12 for 12 points, and Jason Kidd had a weird line, with 11 assists but just 2 points and 6 turnovers. It was only Utah’s second home loss this year (9-5 overall), and the Mavs moved to 9-7, a surprisingly sturdy record when you consider all the close games the Champs have endured already this season (including last-second losses to the Lakers and Clippers in their previous two).

Line of the Night: With all due respect to Kevin Martin and Samuel Dalembert, it’s gotta be LeBron—31 points, 8 assists, 8 rebounds, 4 steals, 3 blocks. And his Heat beat up on Kobe and the Lakers.

Moment of the Night: LBJ is either very, very confident in his teammates or he has supernatural powers. Cool as it was, can you imagine the backlash if Battier had missed the shot?

Dunk of the Night, Winners Edition: Sam Dalembert with the follow-up flush for the win!

Tonight: 11 games in all, headlined by an ESPN’s double-header starting at 8 with Lakers-Magic, followed by Clippers-Wolves, which should be a doozy. Other games to keep an eye on: Atlanta at Philly, Indiana at Golden State, and of course, Denver at Washington. I’m avoiding my laptop for the next 48 hours to prevent carpal tunnel, but Pete will have all your news, notes and stats over the weekend, with a slightly different shade of Eastern Conference misery.