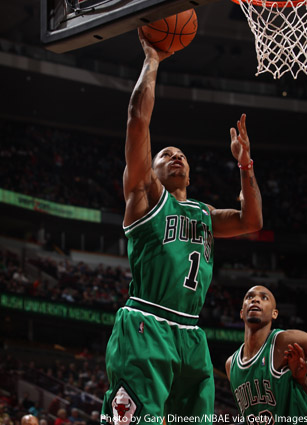 Two nights after the Pacers ran right through the Knicks in the World’s Most Famous Arena, Indiana played host to the ‘Bockers, this time with a healthy Danny Granger in tow. Granger (26 points) didn’t have too huge an impact on the game’s first 47 minutes, but the Pacers star was a major factor when it mattered most, draining an elbow jumper with 0.3 seconds remaining that put his squad ahead by 2. The Knicks had an opportunity to counter in the form of a midcourt in-bounds play, but with Carmelo Anthony (29 points) calling for the ball at the top of the key (Why, though? There were 0.3 ticks left, not enough time to take a deep J!), Jared Jeffries sent an errant pass into the paint, where it was scooped up by the Pacers. Game, hova. NYK has now taken three L’s in a row, and will look to turn those fortunes around at home tomorrow against the Grizzlies.

And, just like that, the Bulls are the #1 team in the East. Chicago hosted the Wizards last night, sending them packing with a loss after beating them down behind Derrick Rose and Luol Deng‘s 43 combined points. But a couple of Washington dudes put up some impressive numbers: young’n Jordan Crawford dropped 27, and JaVale McGee managed an 11-point, 12 rebound, 12-block triple-double. He also got T’d up for “excessive celebration” for doing a pull-up on the rim after reaching double-digit scoring, and that’s just not a very good look. At least not when your team is down 20.

A headband-clad Joe Johnson absolutely dominated the Bucks, dropping 36 and leading the Hawks to an easy home win against Milwaukee. While JJ sank six threes and took care of the team’s outside game, forward Josh Smith owned the interior, scoring 17, grabbing 14 and swatting 4. The Bucks fly home to face the Magic tonight, and, if they’re smart, they’ll hurry up and get their shit together in time to make a half-decent Playoff push.

We got a sneak peak of what the Western Conference Playoffs could look like last night, when the Blazers and Mavs battled down to the end in Portland. The Trail Blazers showed they’re sneakily pretty dangerous, especially with a healthy and ready-to-go Brandon Roy, who scored 21. Dirk Nowitzki (28 points, 11 boards) had a chance at a game-tying three late, but it rimmed out, and the Mavs fell for the second game in a row. LaMarcus Aldridge led his squad with 30.