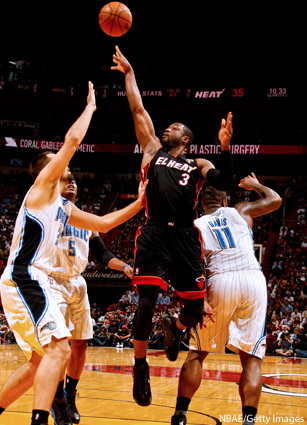 College basketball is enjoying its finest hour, but the big boys are still playing, too. And as we inch toward the Playoffs, every game gets more important. With that in mind, let’s hit Sunday’s slate of games.

Joe Johnson scored 28 points on 11-16 shooting, and the Hawks shot 55 percent as a team in the first quarter to jump out to a 31-19 lead, while holding Cleveland to just 39 percent from the floor for the game. Kyrie Irving scored 19 points and handed out 10 assists, but after helping cut Atlanta’s lead to single digits by the end of the third quarter, he took a rest and watched the Hawks lead balloon back to 16 points without him on the court. ATL won despite having just 10 players dressed and available—and only 7 Hawks played double-digit minutes. Jeff Teague scored 18 points, Kirk Hinrich had 14 and Zaza Pachulia pulled down 12 boards to go with his 9 points. The Cavs were led in scoring by 20 points from Alonzo Gee, but Cleveland made just 5 of 20 three-pointers on the afternoon.

With all the Clippers’ recent struggles, it’s nice knowing Chris Paul is still there to bail them out when need be. CP3 flirted with a triple-double, scored 9 points in overtime including the game-sealing free throws to help Lob City escape what would have been another embarrassing March loss, this time to the suddenly (apparently) competent Pistons. Paul finished with 19 points, 15 assists and 9 rebounds (plus 4 steals), and completely destroyed the point guards he matched up against from Detroit—Brandon Knight shot 3-13 with 6 points and 4 turnovers, Rodney Stuckey was 1-8 from the field (7 points) and even Ben Gordon shot 3-11 (7 points). Young big men for each team had big games, as Blake Griffin went for 17 points and 11 boards and Greg Monroe had 23 points and 15 rebounds.

Jason Thompson notched his third straight double-double (13 points, 10 rebounds) and the Kings used a third-quarter run to break open what was a tie game at halftime. Over his last three games, Thompson has shot a ridiculous 24-29 from the field (and the Kings are 2-1 in those contests). An Isaiah Thomas lay-in gave Sacramento an 8-point lead heading into the fourth quarter, and the Kings held on despite Kevin Love’s 21 points and 11 boards and Minnesota’s 51-42 advantage in the rebounding department. Marcus Thornton led all scorers with 24 points on a night when neither team could hit anything from 3-point range—Minny shot 24 percent from long range, while Sacramento shot a hair better, but still managed just 29 percent from deep.

Rudy Gay capped off a 27-point performance on a 3-pointer with 24 seconds remaining that extended Memphis’ lead to 93-86 and ended Washington’s hopes of pulling the upset. Gay scored 5 points in the final minute, shot 10-12 from the free throw line in the game and added 9 rebounds for good measure. Zach Randolph nearly had a double-double in just his second game back from injury, racking up 13 points and 9 boards coming off the bench. As for the 10-34 Wizards, there were positives—from John Wall’s continued stellar play, this time with a stat-stuffing 25 points, 6 assists, 6 rebounds, 3 steals and 3 blocked shots, to young big man Kevin Seraphin’s 12×12 line in a rare start. But the Grizz were just too much on the boards, outrebounding Washington 53 to 40 and 20 to 9 on the offensive glass.

Dwyane Wade scored 14 of his 31 points in the fourth quarter, Chris Bosh burned Ryan Anderson for 23 points and LeBron James put together a 14-point, 12-rebound, 7-assists, 5-steal night as the Heat won their 13th straight home game. Bosh’s 3-point play on a James dish with 3:46 remaining was the dagger that did in the Magic, who at that point fell behind 84-73 and couldn’t claw back into the game, despite team-highs of 18 points and 11 rebounds from Dwight Howard. Orlando shot sub-40 percent from the field and only four Magic players finished in double figures—81 is the fewest points Orlando has scored in 11 games. 20 turnovers didn’t help the Magic’s cause, nor did Anderson, who scored just 5 points and was benched for the fourth quarter after repeatedly letting Bosh score easy buckets. Miami’s rebounding issues were laid to rest for one night, as the Heat held a 42-36 advantage in that area. The Heat (33-11) sit 2.5 games back of Chicago for the top spot in the East.

It’s time we accept that the myths about the Suns’ training staff are fact. Michael Redd scored 25 points—his biggest scoring night in over two years—and made 3 of his 5 three-pointers to lead the Suns past the Rockets. Phoenix led by as many as 21, and has now won 4 straight games. Channing Frye scored 19 points, Marcin Gortat had 15 points and 10 boards, Steve Nash dropped 11 dimes and the Suns bench outscored Houston’s 47-34. Luis Scola was the high-point man for the Rockets, with 18, but Chandler Parsons and Courtney Lee (both having had career nights recently) combined for just 2-12 shooting and 6 points. In his debut as a Rocket, Marcus Camby scored 8 points and grabbed 8 rebounds in 20 minutes of action.

Kobe haters, you’ll want to peep this line from last night: Bryant shot 3-20 from the field for just 15 points and turned the ball over 7 times. Needless to say, the Lakers lost—their first home L since January 22 against Indiana. Kobe wasn’t the only one turning the ball over, as the Lakers racked up 24 turnovers as a team, leading to 22 Jazz points. Paul Millsap led Utah with 24 points, 9 rebounds, 5 assists and 5 steals and rookies Enes Kanter (17 points) and Alec Burks (13 of his 17 points in the fourth quarter) came up big, too. For what it’s worth, a significant chunk of Burks’ production came vs. Kobe and his gamble-style defense. In unrelated news, Andrew Bynum was Los Angeles’ most effective offensive player, as he scored 33 points on 12-14 shooting and had 11 rebounds to boot. The loss snap a 5-game winning streak for the Lakers, who are 28-17 on the year and 1.5 games ahead of the Clippers for No. 3 in the West.

Oklahoma City closed the first quarter with a late 10-0 run and the Blazers shot 6-23 in the first period as the Thunder jumped out to a 31-15 lead after one. OKC never looked back, leading from start to finish and by as many as 21 behind Russell Westbrook’s 28 points and Kevin Durant’s 26 points, 7 rebounds, 6 assists and 3 steals. The Thunder shot 55 percent from the field and an insane 61 percent from 3-point range (11-18). Meanwhile, Portland’s two biggest performances came from the two players they tried hardest to unload at last week’s trade deadline, as Raymond Felton finished with 19 points and 7 assists and Jamal Crawford scored 23 points off the bench. New PDX head man Kaleb Canales is now 1-1 at the helm, as the Blazers dipped to 21-24 on the year.

Line of the Night: Chris Paul’s near triple-double of 19 points, 15 assists and 9 rebounds.

Tonight: A six-pack of games set to tip, featuring a rare Monday doubleheader on TNT—Bulls at Magic followed by Mavericks at Nuggets.