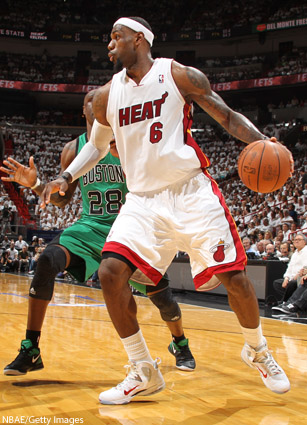 When the final buzzer sounded in Game 7 of Celtics-76ers, the first thought that came to mind was, “This Celtics team looks exhausted.” At the time, I thought Game 1 of the ECF would look like Game 1 of OKC-Lakers: a team with very little bench contributions would play an extremely important Playoff game just two days after a Game 7 victory. The parallels were uncanny. Aging superstars on both teams (Kobe and Pau for L.A., the former “Big Three” for Boston) needed to turn right around and bring their A-game if they didn’t want to start the series in a hole. Furthermore, each team faced an offensive nightmare in Durant and LeBron. Each team also faced a secondary scoring barrage of Harden/Westbrook and Wade. The Lakers lost by about 30 in Game 1, and I expected the same result in Miami on Memorial Day.

However, after a painfully brutal first quarter of 11 points, the Celtics pulled as big of a 180-degree turn as I’ve ever witnessed to go into halftime tied with the Heat. (Before we move on, 11 points in the first quarter? Really? I guarantee you this kid and a band of 4th graders could score 11 points in 12 minutes.) The 35-point second quarter masterpiece stands as the most any team has scored against the Heat this season in one quarter. How on Earth does a team go from scoring 11 points to 35 points in back to back quarters? Did they forget the game started at 8:30?

The answer: Rajon Rondo. The Celtics move as Rondo moves. He is the engine that makes them run. If he plays poorly, the Celtics may as well step off the floor. If he gets hot, they can play with and beat any team in the league. He came alive in the second quarter after LeBron James tore apart the Boston defense for 13 first quarter points. Rondo ignited the second quarter charge with his uncanny ability to get in the lane and make the right decision with the ball, dishing the rock when his scoring options closed and taking the ball himself when he saw an opening.

The turning point of the game came when LeBron James started guarding Rondo. LeBron took Rondo’s driving ability out of the game and forced the Celtics to move without the ball more. The Celtics depended on Rondo’s penetration to create shots for the whole team, and LeBron neutralized that threat. Combine LeBron’s defense with the Celtics’ fatigue, and you have a recipe for a collapse.

The Heat received big contributions from the supporting cast in Game 1. LeBron and Wade combined for 54 of the team’s 93, but the combination of Shane Battier, Mike Miller and Mario Chalmers poured in 27 points. Those 27 points turned out crucial in Game 1 and will need to be repeated, if not surpassed, if the Heat want to win the title.

The bottom line: I don’t care how well Rondo plays; Paul Pierce and Ray Allen need to produce more. Allen’s bum ankle became blaringly evident, as he only made one field goal all game, but 6 points from a future Hall of Famer will not get the job done. Pierce looked lost and committed way too many poor turnovers/bad shots.

When Pierce and Allen play poorly, Rondo tenses up. A tense Rondo gets technicals, pouts and neutralizes one of the League’s most exciting talents. The Heat’s “Big Two” flat-out harassed Allen and Pierce to the point of exhaustion early in the game—credit LeBron and Wade for playing like all-stars again.

I wrote during the Heat-Pacers series that the margin of error for an opposing team playing when LeBron and the Heat play well is microscopic. Major errors, such as four technical fouls (which, to put it as nicely as possible, were “questionable” calls), 10 missed free throws and three quarters of scoring under 20 points just cannot happen against the Heat. If Pierce and Allen don’t step up their play, the Celtics may see the end of the Pierce-Allen-Garnett-Rondo era end quicker than hoped. —Dave Spahn (@DaveSpahn)