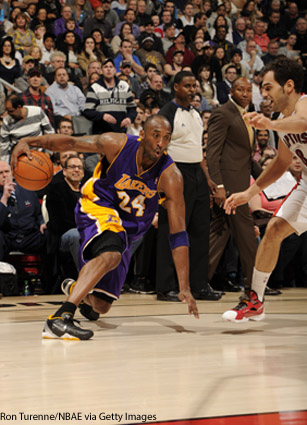 If there’s a better cure for a hangover than pounding Gatorade and watching an afternoon slate of NBA hoops, I haven’t found it yet. Finally, Sundays are for basketball.

Kobe Bryant does it again. And the Toronto Raptors are still the Toronto Raptors (in case you were wondering). The Kobester hit a baseline jumper with 4.2 seconds left after shaking free of James Johnson, the go-ahead bucket in the Lakers’ win. On Toronto’s ensuing possession, Rasual Butler couldn’t find an open man on the inbounds, and was called for a five-second violation even though it looked like both he and head coach Dwayne Casey called for a timeout. Scott Foster strikes again! The Raps got a second chance after Kobe split a pair of free throws, but DeMar Derozan (2-13 FG, 8 points) air-mailed a three at the buzzer, as L.A. improved to 16-12 on the year. Bryant finished with 27 points (9-23 shooting) and was in full Mamba mode in crunch time, but it was Pau Gasol who drove the Lake Show for most of the game—he finished with 16 points, 17 rebounds and 6 assists. Jose Calderon was huge for Toronto (30 points, 13-18 FG, 4-4 3PT) but no other starter scored in double figures, and the Raptors squandered a chance to take the upset. The Dinosaurs are 9-20 and still missing Andrea Bargnani, while the Lakers’ W capped off their “Grammy” road trip at 3-3.

Think Rajon Rondo felt a little disrespected after not being selected to the All-Star team? Well, whatever motivated his 32-point, 15-assist, 10-rebound triple-double, the Celtics took it and held off the Bulls en route to 15-12 on the season. It’s just the tenth time in NBA history a player’s put on a show like that, joining some pretty incredible company (word to Magic Johnson). After Boston jumped out to a comfortable double-digit lead, Chicago stormed back and cut the deficit to just three points in the final minute of the game. But after a Paul Pierce turnover, Carlos Boozer (22 points, 7 rebounds) didn’t see a wide-open CJ Watson (22 points, 6 assists) downcourt, instead calling a timeout. Still down 3, the best shot the Bulls could come up with was a long fadeaway two from Watson, which fell short with just over 20 seconds to play, and the Celtics hung on to snap a 5-game win streak for Chicago. Then again, the Bulls—who shot just 39 percent on field goals—played without Derrick Rose, who is scheduled to see a specialist on Monday for lingering back spasms. Booz should thank Rondo for his epic performance, because without it, the story of the game would have been the power forward’s oddly obvious hair helmet/paint. C’mon, B…

Wiz win! Wiz win! The Pistons came in winners of four straight (I know, I didn’t believe it either) but Washington used a 22-2 run in the second half led by John Wall to take a lead that swelled to as many as 27 and cruise to the win. Wall shot just 3-10 from the field (9 points), but tied a career-high with 15 assists and took over the game in the second half even without scoring, dishing out alley-oops left and right, mostly to Javale McGee (22 points, 8 rebounds). This game was tied at 45 at the half, and as close as 62-61 late in the third quarter before the Wizards—behind Wall doing a CP3-ish impression—went crazy and pulled away, overcoming 21 turnovers to move to 6-22. Rashard Lewis deserves mention for his 10 points, which put him over 15,000 for his career. In other news, the Pistons (8-21) reverted to crappy form, shooting 33 percent from the field as a team and 1-11 from the three-point line. Detroit got 27 points from Greg Monroe, but less than 30 from the rest of the starting lineup.

I think I’ve written something to the effect of “Just when we start giving the Hawks credit…” or close to it about a dozen times already this season, and there’s no doubt it’s been written a hundred times over in previous seasons. But hey, it’s just one game, right? The score was tied at 16-16 in the first quarter, but by the end of one, the Heat held a commanding 30-18 advantage. By halftime, Miami had 63 points (most given up by ATL this year), was up by 22, Dwyane Wade already had 21 points, and Chris Bosh had a 10×10 double-double. The Heat led by as many as 32 and have now won 10 of 12 games. At least for one night, there was a massive difference between the top two teams in the East’s Southeast Division—Miami is now 21-7, the Hawks 18-10. LeBron James attacked the rim on his way to a 23/13/6 line in the blowout, Bosh finished with 14 and 16 and the Heat outrebounded the Hawks 52-38. If you had Willie Green in the “who will lead Atlanta in scoring” pool, you win—he had 17. The only ATL starter to score in double figures was Joe Johnson, who had 12 points on 5-13 shooting.

One game after beating Denver, Monta Ellis scored 33 points on 23 shots, and added 7 assists and 5 boards to pace Golden State past Houston, another Western Conference team with a winning record. Ellis helped the Warriors turn a two-point lead after three quarters into a comfortable double-digit lead late in the fourth, and as a team, GSW shot better than 50 percent for the game. David Lee chipped in a 15/13/6 line including a nice putback slam and Stephen (or “Steff-Fawn”?) Curry and Klay Thompson scored 14 apiece. After four games scoring less than 10 points, Kevin Martin broke out for 28 points, and Luis Scola scored 14 points to go with 13 rebounds, but it wasn’t enough to get past the Warriors, who are now 10-14 (7-8 at home). Kyle Lowry had a rough shooting night (3-10, 10 points), but did have 9 dimes. The Rockets lost despite winning the rebounding battle 47-35—19 turnovers didn’t help. Houston (16-12) gets Memphis, OKC and Minnesota this week.

Gordon Hayward, y’all. 23 points on 8-12 shooting, including some clutch scoring down the stretch, as he and Al Jefferson (21 points, 15 rebounds) led the Jazz to a big fourth quarter to beat Memphis and move to 14-12 on the season. And frankly, the Grizz deserved to get a beatdown for wearing those Memphis Tams jerseys again—those unis are straight WTF material. By the way, in case you missed it, Rudy Gay admitted on the ESPN broadcast that he “picked them out,” whatever that means. Gay had 22 points, and Mike Conley and Marc Gasol had 17 each for the Grizzlies, but Utah shot 51 percent from the field and 26 assists as a team, plus the Jazz scored 30 points off Memphis’ 19 turnovers and 54 points in the paint. The win was the first of a back-to-back-to-back for Utah, as they’ll face New Orleans tonight and the Thunder on Tuesday.

Dunk of the Night: The Celtics with back-to-back oops.

Tonight: Six more games on deck, highlighted by Lob City vs. the Champs at 8:30, and Heat-Bucks at 8. Can Milwaukee beat Miami for a third time this season?