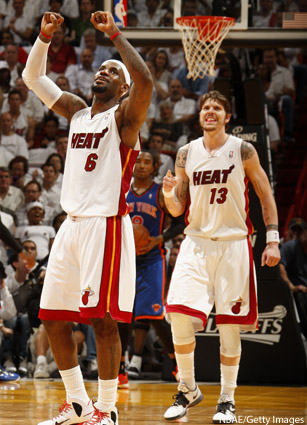 That’ll do it. With last night’s 106-94 series-ending loss to the Heat, the Knicks’ wild, roller-coaster of a season came to a disappointing end. Behind another suffocating defensive performance, Miami put their opening-round series to bed and will now move on to face the Pacers in the Eastern Conference Semis.

Things started off okay, as New York hung tough with the home team behind Mike Bibby’s 8 first-quarter points and the Knicks trailed by four at the end of one. In the second, New York faced the same problem that plagued them the entire series: Their inability to close the first half on a strong note. With the score at 44-40 in Miami’s favor with under three minutes to go in the half, it looked like the Knicks were going to keep things interesting. But, just as fans got their hopes up, the Heat ripped off an 11-4 run to push the lead to double-digits, effectively ending the Knicks’ hopes of taking the series back to The Garden.

In the second half, it was all Miami. After allowing their opponent to come back from a double-digit deficit in Game 4, the Heat keep their foot on the gas and led by double-figures the entire second. Miami played its best game of the series and matched smothering defense with a balanced offensive attack, as four players scored in double-figures. LeBron led the way with 29 points, 8 boards and 7 assists while Dwyane Wade and Chris Bosh scored 19 apiece. For the Knicks, Carmelo Anthony scored 35 points on 15-31 shooting. The Eastern Conference semifinals tip off on Sunday in Miami. —Peter Walsh (@goinginsquad)

Earlier in your life, when you could lift heavy things and reach the highest shelves, when you used to go to the market to buy whole cows with cut up pennies, you envisioned this Grizzlies playoff run to be a lot different. You thought they were going to bury teams right away with outlet passes and transition defense. You thought they would have 1920s brawn. Marc Gasol would be stepping over defenders like a true circus freak, you thought to yourself, then he’d rip off his shirt middle-outward, like a professional wrestler.

Fine. By “earlier in your life,” I mean “two weeks ago.” But it sure as hell felt like 50 years ago.

After 11 days of doing the opposite, Memphis finally looked like that badass, scrappy title contender that we had envisioned before they got all soft and weird in the first part of this series. Not only did the Grizzlies stay alive, drubbing the Clippers, 92-80, they looked like they finally showed up for the Playoffs.

The first quarter is probably an edge case, but it was an awesome edge case. It’s hard to describe the pummeling the Memphis frontline gave to the Clippers without bringing up weapons or violent crime, so here are numbers:

The Grizzlies scored 36—and 27 came from either Zach Randolph or Marc Gasol. They were a combined 12-of-14 from the field. Randolph capped it off with a three-point play on the grittiest of floaters. It felt like the end of a murder in a horror movie, and it was just the last field goal of the first quarter.

The Clippers stuck around, but who the hell knows how. Mike Conley was eating off of Chris Paul’s plate the whole first half. Paul, remember, made us all want our MVP ballots back so we could bump him ahead of everyone after Game 4. It took him 23 minutes to get his fifth point in Game 5.

Here’s the other thing: Blake Griffin actually looked good. Other than the time he ripped his shoe in half in the second quarter—this actually happened—he appeared to be in rhythm. He got some alley-oops and putbacks like regular season Blake. He finally looked comfortable.

Problem is, the rest of the Clippers couldn’t get past Conley and Tony Allen if they were brandishing a hot iron plate that said “I Love Terrorism” on it. The Clippers’ big men—Griffin, Jordan, Martin, Evans—all at least need a nice entry pass. And that wasn’t happening.

Not until the end of the third.

Chris Paul got frustrated and started taking over. (It’s almost getting boring writing that sentence every game, at this point.) Down 22, he was called for a technical. So was Caron Butler. Then they went on an 18-4 run that had Memphis fans wondering if they were time traveling back in time 11 days.

But the Grizzlies were resilient and big and strong, finally. When the Clippers cut it to 8 with 3:47 left, the Memphis frontline went into lockdown. L.A. didn’t score for another two minutes.

Paul came up limping at the end of the run, a presumed pulled groin, and now everything has changed. This series was in the bag 24 hours ago. All the Clippers have to do is go home and win a game on Friday, but that seems like Hell now. Blake needs new shoes, CP’s gimpy, and Memphis just remembered how good they are. —Ben Collins