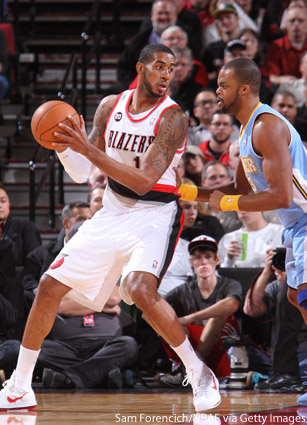 Playing in the second half of a back-to-back, the Clips came out strong but fell apart in the second (and further in the third), as they dropped yet another one and reverted to 1-12. Rough stuff. The Pacers looked good, winning behind Danny Granger’s 22 and Roy Hibbert’s 18. They’re now 5-5, and my new sleeper to squeak into the 7th or 8th spot in the Eastern Conference Playoffs. Anyone agree?

Without Steve Nash, or Robin Lopez, but mostly Steve Nash, the Suns didn’t stand much of a chance against an energized and healthy Magic team that came out firing. Orlando led 62-34 at half (is LOL an appropriate thing to write here?), and probably couldn’t look back even if they wanted to. Dwight Howard led his crew’s scorers with 20 (plus 12 boards) in only 30 minutes, and all five starters plus Jay ElectPietrus finished in double figures. They moved to 8-3, now a half game ahead of the Hawks for first in the Southeast.

After two blowouts, we were lucky to get some actual competition to cap this Thursday night off. These two went back and forth for the entire 48, but Portland was able to pull ahead in the fourth and hang on as Denver tried to put in a game-tying shot in the final seconds (amidst a few controversial no-calls). Lots of sloppiness in this one: the Nuggets shot 38.5 percent from the field; the Blazers shot 40 percent from the field and 50 percent from the line; Carmelo Anthony scored 18 on 5-15 shooting and fouled out with three minutes to go; and neither team reached 20 points in the fourth quarter (and the Nugs only scored 12 in the period). Impressive win for Nate McMillan’s guys, who took the W with their star Brandon Roy sidelined with a knee injury.

Performance of the Night: Not exactly our best POTN (actually, our worst?), but it’ll have to do. LaMarcus Aldridge: 24 points, 10 boards, 2 assists, 1 block.
Moment of the Night:
In the first half of an otherwise laid-back blowout, Vince Carter threw down a dunk that had me wondering what Frederic Weis is up to these days. Will embed a video here once one starts to float around the Net.

And that’s all she wrote, folks. Anton will hold you down all weekend, and I’ll be back here on Monday. See you ladies and gents then.