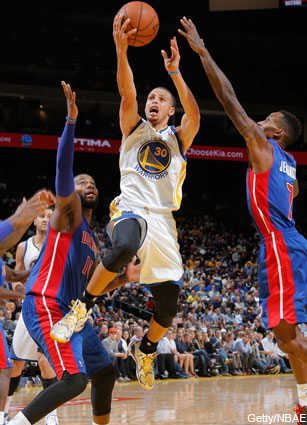 While you were watching three unbelievable college prospects ball in primetime, there were four pro games going on. Spoiler alert: the road teams didn’t do well.

The Heat ran right through the Larry Sanders-less Bucks in Miami last night. LeBron paced the team with 33 points, though he managed only 3 boards and 2 assists in 30 minutes. Still, it’s hard to argue with 13/21 shooting. Mario Chalmers chipped in 15 and 7 dimes, but perhaps the game’s biggest story surrounded Michael Beasley.

The former K-State stud came off the bench for 20 minutes and scored 19 points. He scored 10 points on Saturday night and may slowly be carving out a role in Miami’s rotation. Granted Ray Allen sat out on Tuesday night, but Rashard Lewis saw 24 minutes, so obviously there’s legitimate run for the taking if Beasley keeps up the solid play.

Two Bucks scored 18 points—John Henson (7/10) and Gary Neal (3 treys). Only one starter (Caron Butler) scored 10 or more points, and he shot 4/15 on the night. Giannis Antetokounmpo saw 22 minutes and scored 11 points (3/5 from deep) with 4 rebounds—all career-highs for the rookie.

Washington hung with the Mavs for the first quarter, but got blown out in the second period and never made back the ground. Dirk Nowtizki and Monta Ellis lead the team with 19 points each, while Shawn Marion and Sam Dalembert combined for 23 points and 14 boards.

There are certainly faster teams than the Mavs—they scored only 5 fast break points on Tuesday—but the Dallas offense has been potent nonetheless.  They’ve scored at least 99 points in all eight games so far.

Meanwhile, it was more of the same for the 2-5 Wiz, who got some big individual performances but couldn’t piece them together. Trevor Ariza knocked down 5 threes on his way to 27 points and John Wall (14 & 10) and Marcin Gortat (12 & 12) each double-doubled. They have to go to San Antonio tomorrow night, and are staring right at yet another disappointing start to a season.

The Pelicans forgot to show up in LA last night. They came out flat in the first half, managing just 39 first half points against a defensively inept Lakers squad. The final numbers don’t look too terrible—40.5 percent from the field, 23:13 assist:turnover ratio, 33 free throw attempts—but don’t get it twisted: this was an ugly showing from the ‘Cans.

Meanwhile, the Lakers had solid contributions from a handful of guys. They rely on balanced scoring when they play well, and that’s exactly what they got on Tuesday night. Jordan Hill led the way with 21 points and 11 rebounds. Steve Blake tallied 10 assists starting in place of Steve Nash, and Pau Gasol, Jodie Meeks, Xavier Henry and Nick Young each scored at least 14. Henry also had this monster jam:

Detroit has faced four good teams in a row—Indiana and Oklahoma City at home and then Portland and Golden State on the road—and dropped all four games. Last night, the Pistons got blown out in the first quarter (35-16) and never came within shouting distance of the Dubs.

Stephen Curry set the tone with 25 points (7/10 overall, 9/9 free throws) and 8 dimes. David Lee posted 17 and 9 and Andre Iguodala tallied 11 assists. Meanwhile, Jermaine O’Neal came off the bench and turned back the clock about seven years. He sank 7/8 shots in 23 minutes and finished with 17 points and 6 boards. Garbage time is a beautiful thing.

Detroit got 16 and 14 from Andre Drummond, but Brandon Jennings shot just 5/14 with 3 turnovers and 2 assists and Josh Smith knocked down 1/6 shots in 19 minutes. The Pistons have some major problems to work out.

This season, I’ll be posting a semi-random highlight video of a former baller at the bottom of my Post Ups. Yesterday, Magic Johnson got the honor. Today, it’s Penny Hardaway. Enjoy his insane ability to maintain total control of his body while flying all over the place.