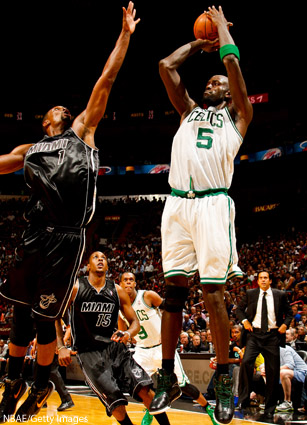 Welcome to the Wednesday morning Post Up. Where else can you digest a 6-pack before 9 o’clock in the morning?

Your eyes are not deceiving you. My Wizards did in fact beat the Magic, behind career-highs in points (24) and rebounds (13) from Kevin Seraphin who also tied a personal best with 4 blocked shots. Of course, Dwight Howard’s absence made things a bit easier for Kev, but it’s not the Washington’s fault that Howard’s sore back was enough to keep him out—I’m guessing he as just so scared of Seraphin he refused to get dressed. Of the Magic players who did in fact suit up, Jameer Nelson was the best, scoring 19 points and dishing out 7 dimes. But John Wall outplayed him, scoring 15 points an dialing up 7 assists of his own while wreaking havoc on the break and helping his Wiz teammates shoot 50 percent from the floor. Jordan Crawford (21 points) delivered the dagger on a 3-pointer with just over a minute to play, on a pass from—who else—Wall.

Rajon Rondo had 10+ assists for the 18th straight game, this time finishing with 15 dimes to go with 18 points, and the Celtics overcame a 36-point effort from LeBron James (who added 7 rebounds and 7 assists on the evening) to deal Miami just its fourth home loss of the year. Boston went on a 16-2 run to end the first quarter and Miami gave up 65 first-half points to the Celtics—the most they’ve given up before halftime all year. And even after the Heat got back to within single-digits, the Celtics responded by hitting their first 8 shots of the fourth quarter. Yet again, Dwyane Wade (20 points) cut the Beantown lead to 5 with just over 2 minutes remaining, but Kevin Garnett played the role of closer, putting the finishing touches on his 24-point, 9-rebound night to send the Heat home unhappy campers. Paul Pierce’s 27 points led the Cs, who shot an absolutely insane 61 percent from the field as a team—a season-high.

The life of a Bobcats fan has been bad all season, but seeing Luke Walton play 20 minutes, dish out 4 dimes and help ignite a crucial 10-0 run to start the fourth quarter as the Cavaliers took down Charlotte without Kyrie Irving in uniform has to be damn near rock bottom. Not to mention the fact that Lester Hudson led all scorers with 25 points, along with his 8 rebounds and 6 assists. The ‘Cats have now lost 13 straight games, this one while being out-boarded 45 to 32. Gerald Henderson (21 points) and Kemba Walker (20) tried their darndest to get the W, but Corey Maggette had other thoughts (perhaps ping-pong related) as he shot 1-7 and scored 4 points in his rousing 16 minutes.

It’s not stealing if I’m the guy who wrote it, right? Here goes: Lou Williams, Spencer Hawes and Thaddeus Young came off the bench to spark the Sixers, who snapped a four-game losing streak by beating the Nets in blowout fashion, 107-88. Williams finished with 20 points, eight rebounds and five assists, while Hawes and Young each scored 19 points and grabbed eight boards. The Sixers opened up an 18-point lead in a decisive third quarter during which Williams and Hawes each had eight, and Philadelphia’s lead swelled to as many as 23 in the fourth. Nets forward Kris Humphries finished with a team-high 20 points and 10 rebounds in a losing effort.

Win No. 1 without Lamar Odom? Check. The Champs are 32-26 and have shed the weight that was LO, for better or worse. In his absence, Dallas played total team ball, as 6 players finished with double-digit scoring nights, and 10 guys scored at least 7 points. Dirk Nowitzki had the highest total with 15 points, but Shawn Marion’s 14 rebounds (to go with 10 points) were more important—the Matrix terrorized the Kings on the boards with 6 offensive rebounds. Even with DeMarcus Cousins going ham to the tune of 25 points, 18 rebounds, 3 assists and a career-high 6 steals, Sacramento was still outrebounded by a 56 to 40 margin. The Kings have lost 5 in a row, while the Mavs are now just a half-game back of Houston for the 6-seed out West.

In a rematch of Sunday’s overtime thriller, which the Knicks won, the Bulls were without Derrick Rose. Luckily, Richard Hamilton was healthy for once—he scored 18 of Chicago’s 25 third-quarter points and finished with 20, plus 5 rebounds and 4 assists. Rip and the hustling Bulls scored 25 second-chance points to just 5 for the Knicks, thanks in large part to 51-33 rebounding advantage. Tyson Chandler was the only man rebounding for the Knicks (15 boards, 10 points) while Carmelo Anthony handled the offense, with 29 points, but got little help from the rest of New York’s roster. Luol Deng scored 19 points and had 10 rebounds, Kyle Korver dropped 14 and the Bulls opened up a full 3-game lead on Miami for the top spot in the East. Oh, and the Knicks bench was atrocious.

Line of the Night: Miami took the L, but Mr. James delivered a tidy 36-7-7 line in defeat.

Dunk of the Night: Plenty of rim wreckage on Tuesday night, but here were the 3 best, according to yours truly—Iggy gets up for the oop, Vinsanity dials up the time machine and LeBron and Wade hook up per usual.

Tonight: ESPN brings you a suddenly imminent Playoff race matchup between the Knicks and Bucks before Warriors-Blazers wraps up their doubleheader. Elsewhere, 9 more games including Clippers-Thunder and Spurs-Lakers.