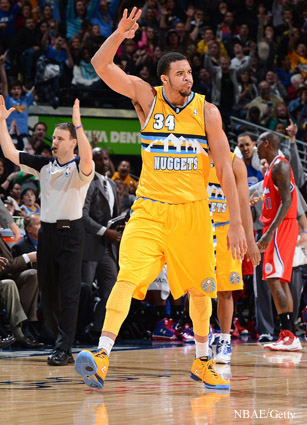 A veteran Mavs team was beginning to feel the frustrations of a six-game skid and thankfully snapped their streak over the lowly Wizards. D.C. started the game on the right foot by taking a 14-point lead early in the second quarter. But the Mavs found their rhythm and outscored the Wiz 35-19 run in the third quarter to take an 83-71 lead into the fourth. The Mavs pushed their lead to 15 with three and a half minutes left but the Wizards reeled off a quick 8-0 run to cut the deficit to seven. Vince Carter (game-high 23 points) threw down a big dunk with a minute and change left to end the Wizards’ run and stall their momentum down the stretch. O.J. Mayo scored 15 on 6-10 shooting and Darren Collison scored 18 and dropped 8 dimes. Brad Beal led the Wizards with 22 points.

Despite 45 points (on 23 shots) from Carmelo Anthony, the Blazers outlasted the Knicks for a tough victory at the Garden. The Blazers led wire-to-wire and used an 11-0 run in the second quarter to turn a seven-point lead into an 18-point lead after a Wes Matthews bucket. The Knicks cut it to eleven heading into the half after Melo’s desperation three that beat the buzzer but the third quarter belonged to Nicolas Batum (26 points, 6 dimes). Batum scored 13 points and hit three three’s in the third as the Blazers held onto a 78-71 lead. In the fourth, the Knicks finally got on track offensively and cut an 11-point deficit to three with 50 seconds left in the game thanks to a Melo three. Dame Lillard (21 points, 6 dimes, 5 boards) calmly responded with a step back three-pointer that proved to be the dagger. The Knicks cut it to three again after Melo converted a three-point play and New York had a chance to tie it after winning a jump ball situation but Melo missed a pull up three and the Blazers hit their free throws to ice the game. STAT made his return with 6 points in 16 minutes. J.R. Smith scored 28, grabbed 11 boards and dished out 5 assists as he continues his hot streak. LaMarcus Aldridge scored 19 and grabbed 14 boards and J.J. Hickson scored 18 points on 9-11 shooting.

Detroit held on last night to beat Sacramento for their third straight victory and their first three-game winning streak of the season. Greg Monroe scored 18 points and grabbed 11 boards and Brandon Knight dropped 20 to lead the Pistons. Detroit led by as many as 16 but the Kings rallied in the fourth quarter behind Jimmer Fredette’s 13 fourth quarter points to cut the lead to one. Sacramento had a chance to pull ahead but Tayshaun Prince blocked a shot attempt and the Kings were hit with a shot clock violation.The Pistons pushed the lead back to three and with 11 seconds left, Austin Daye (13 points) nailed a three-pointer to seal the game. DeMarcus Cousins led all scorers with 21 points and 14 rebounds. Detroit’s reserves combined for 45 points and the team shot 52 percent overall for the game.

Josh Smith scored 23 points, grabbed 13 boards, dished out 7 assists, blocked 4 shots and notched 3 steals to lead the Hawks to a road win over the Hornets. New Orleans led 50-44 at the half but Smith scored 10 of his 23 points in the third quarter as Atlanta outscored their opponent 28-14 in the third to turn a six-point deficit into an eight-point lead. In the fourth quarter, New Orleans cut the lead to two points after Greivis Vasquez (17 points, 10 dimes, 9 boards, 2 turnovers) hit a free throw with four and change remaning. Kyle Korver (14 points) responded with a three to put the Hawks up five with just under four minutes to go and the Hornets didn’t threaten again. Al Horford finished with 20 points and Zaza Pachulia chipped in with 12 and 10 off the bench. Ryan Anderson led the Hornets with 23 points and Ant Davis scored 9 and grabbed 13 boards.

JaVale McGee hit a three, Danilo Gallinari scored 17, Kenneth Faried scored 14 and grabbed 11 boards and everything seemed to go right for the Nuggets as they ended the Clippers’ 17-game win streak. Denver is now 10-1 at home and after playing much of the first quarter of the season on the road, 11 of their next 14 games will be played at home giving them a terrific chance to rise exponentially in the Western Conference standings. The Clippers shot 39 percent from the field and a putrid 17.9 percent from three and never got closer than 14 in the fourth quarter. Blake Griffin led the Clips with 12 points and 9 boards.

Kobe scored 36 but it wasn’t enough as Jrue Holiday led the Sixers with 26 points and 10 dimes as the Sixers beat the Lakers in LA. The game was close throughout, with Philly only leading by as much as eleven, and came down to the wire. The Sixers were up 99-94 with under two minutes to go when Dwight Howard (7 points, 14 boards, 5 blocks) blocked Holiday’s shot which led to a Kobe three on the other end that cut the deficit to two with 90 seconds to play. On the next possession, Spencer Hawes (13 points off the bench) hit a baseline jumper to make it a four-point game. Kobe then committed a turnover but the Sixers couldn’t capitalize as Jason Richardson missed a wide-open three to give the Lakers a chance. Steve Nash (12 points, 10 assists) and Ron Artest (13 points off the bench) went on to miss consecutive three-pointers and Holiday corralled the ball and threw down a fast-break dunk with 22 seconds left to seal the deal. Evan Turner shot 8-14 for 22 points, grabbed 13 boards and doled out 5 assists.