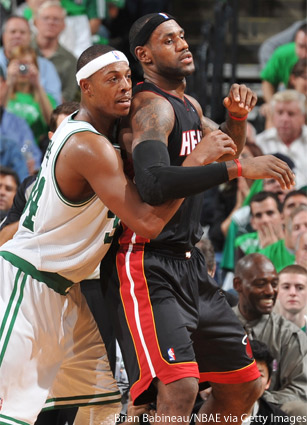 I was in the midst of introducing this post with some FINALLY NBA SEASON sentiment when I realized, if you’ve visited this website (or any hoops/sports site) at all during the past week, you’ve probably been fed more than enough hype. Well, it’s here. The season, and The Post Up. Let’s get right to it. (But yeah… FINALLY NBA SEASON.)

So, this happened. After months and months of waiting for the Miami Thrice (Are we officially calling them that? Can we not?) to commence their journey to an as-of-yet unknown promised land, we get an 80-point performance and a half-decent showing from only a single member of the newly-formed South Beach triumvirate. Boston came out firing, and—with the exception of a late run that brought the Heat close but not close enough—dominated from the jump. LeBron James did what he could, dropping 31 on 10-21 with 4 boards and 3 assists, but there was simply no help to be had. Dwyane Wade was hungry, attacking the hoop and putting up shots from all over the court, but nothing would fall, and he finished with 13 points on 4-16 from the field. Chris Bosh was kind of apprehensive, seemingly unsure when to fire away and when to defer to his friends; he tallied just 8 points and shot 3-11. We’ve all assumed depth and outside shooting would be the team’s biggest issues, and we were proved correct—nobody from the bench (or the other two starting positions, for that matter) stepped up in the slightest (though Udonis Haslem did rebound fairly well), and a handful of wide-open J’s clanked off the rim. Chemistry—the squad’s third problem—can and will be worked out, but only time will tell if anyone steps up to assist in fixing the other two.

Meanwhile, the Celtics looked great. Rajon Rondo quarterbacked his ass off, distributing 17 dimes in beautiful fashion. I was hoping he’d added some offensive moves (read: a jump shot) this summer, but he wasn’t really pressed to put the ball up himself anyway. And yeah, that ability of his to find crazy passing angles just keeps improving. The Big Three were effective, as Ray Allen, Paul Pierce and Kevin Garnett (scoring 20, 19 and 10, respectively) each performed their assigned roles well, and while the Heat could barely throw five productive players on the court, the C’s rotation was a solid nine guys deep, and will be 10 when Perkins returns. They just need to stay healthy.

You might have missed it (though League Pass is free this week, so you shouldn’t have), but this was a great game. And that score doesn’t really do it justice; this was an exciting back-and-forth until the Blazers took off in the middle of the fourth. Portland has such an awesomely random cast of contributors, it’ll be interesting to see who steps up on any given night. Last night Nicolas Batum (19 points, 11 boards) was huge, and his buckets propelled the final-quarter run that won his team the game, but Wesley Matthews, Dante Cunningham, Armon Johnson and Rudy Fernandez all put in good minutes. Brandon Roy led the team with 24 points, while Marcus Camby (13 and 10) refuses to age. The Suns—with their abundance of small forwards and lack of big men—just can’t rebound or defend very well, which is a pretty big problem in a professional basketball league. (They were out-rebounded 48-30.) With Steve Nash (26-4-6 and 10-19 from the field) at the helm, they’re still incredibly fun to watch, but they won’t be more than a middle-of-the-pack franchise if the rebounding and defense woes continue. Without Amar’e, they can’t afford to be so weak in those areas and expect to win. Jason Richardson was Phoenix’s swingman du jour, hitting 9 of 13 for 22 points.

I guess the first night of NBA action had to end with a nail-biter, right? This one was another back-and-forth contest, and with a chance to tie the game in the final seconds, Aaron Brooks couldn’t squeeze a lay-up through Steve Blake and Lamar Odom’s flailing arms. Kobe Bryant and Pau Gasol led the Lakers in a very Kobe-and-Pau-Gasol-like fashion, as Kobe put up 27 points, 7 assists and 5 boards and Gasol went for 29 and 11. Shannon Brown caught fire in the fourth, scoring 14 of his 16 in a seven-minute span to help L.A. grab the lead in the final minutes. For the Rockets, both Kevin Martin and Aaron Brooks were great (26 and 24 points, respectively), while Luis Scola grabbed 16 rebounds. Yao Ming fouled out in 23 minutes, which was all good, given his team-enforced 24-minute limit. He had 9 points and 11 rebounds in his return.

That’s it for now, folks. Tonight we’ve got a packed schedule, so tomorrow there should be plenty more to talk about. One quick note before I’m out: The SLAM authorities gave me free range to write The Post Up however I feel comfortable, and I’m still trying to figure out the best way to do so. I might be tweaking the format in the next few weeks, and maybe adding some features (a nightly award or two?), so if you have any preferences or ideas, feel free to hit me with ‘em in the comments. Thanks, fam.