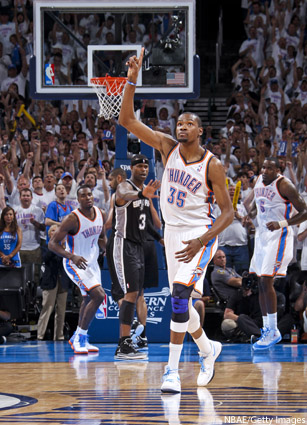 The Thunder were down 18 in the first half to the Spurs. Fifteen at the half. It didn’t matter. Oklahoma City cordoned off the last vestiges of the old NBA and put it out of its misery last night. They won 107-99. The Thunder are going to the NBA Finals. A bunch of respectful, better young men were wielding the axe.

The best of them all was Kevin Durant, who is now arguably the best player in the NBA. He has all of the tools, the freakish mold, the statlines from the core of the Earth. But now, too, he has splayed out these guts or balls or a careless disregard for his body and his future. It is the final intangible.

He played all 48 minutes because they needed him to, because they were down 18 so quickly, because he’s 23 years old, because that’s what young players tend to do when they want statues of themselves melded into the sidewalk outside of their home arenas. It’s the only way the Thunder could’ve won, so he did it. They won.

The Spurs came out firing like a guy feverishly trying to build a bomb shelter before the world came tumbling down. Stephen Jackson and Tony Parker almost pulled it off by themselves.

San Antonio already led 19-14 when Parker started heaving floaters and distant threes in from everywhere. He scored 9 in a row. It looked like that time in the 2007 NBA Finals when no one could figure him out, when that spin/floater combo was too quick for even the camera guy.

But it’s not the 2007 NBA Finals anymore. That was five years ago. Stephen Jackson can go 6-6 from three—and he did—and nothing’s going to stop it from being five years later.

The Thunder figured that out at halftime. You know those bad Russell Westbrook shots from the elbow that make everyone in Oklahoma City want to set their TVs on fire? Those were all going in. The Spurs held it off initially with Tim Duncan ignoring double teams and bulleting home mini-hooks.

Then things fell apart completely. It doesn’t usually work like this, but it’s readily traceable to one play with 9 minutes left in the third quarter. Tiago Splitter messed up an assignment. Gregg Popovich wanted him doubling Durant on the touch. He didn’t. He doubled a little late and Durant was fouled. So what.

Popovich—bless his heart, one of the best we’ve ever seen—lost it. He threw in DeJuan Blair, who hadn’t played yet, and spent the next two possessions admonishing Splitter and certifiably scaring the living hell out of Boris Diaw and everybody else who wasn’t on the floor. This kind of stuff worked in the late 1800s, when overcoming shame was a badge of honor and Tim Duncan was a rookie. But it sure as hell doesn’t work now.

The Thunder went on a 9-2 run. San Antonio’s time was up.

James Harden and Westbrook put them away. The superteam that the Heat were supposed to be was quietly and simultaneously assembled in Oklahoma City, fairly and without any creepy, underhanded backroom dealing in clubs throughout Toronto and Miami and Cleveland years beforehand.

Durant and Westbrook and Harden—a true, vicious Big Three if I ever saw one—grew as a team and invited Derek Fisher in to give them a last push out of the cold, dark cellar. He hit a leaner with two minutes left. It gave the Thunder a six-point lead that they never lost. The Thunder became the first Western Conference team since 1998 to make the NBA Finals not named the Mavericks, the Lakers, or, yes, the Spurs.

Now they go either to Boston to prove the same point but louder, or to Miami to prove a much bigger one.

The point, by the way, is this: This is the Thunder’s decade. —Ben Collins