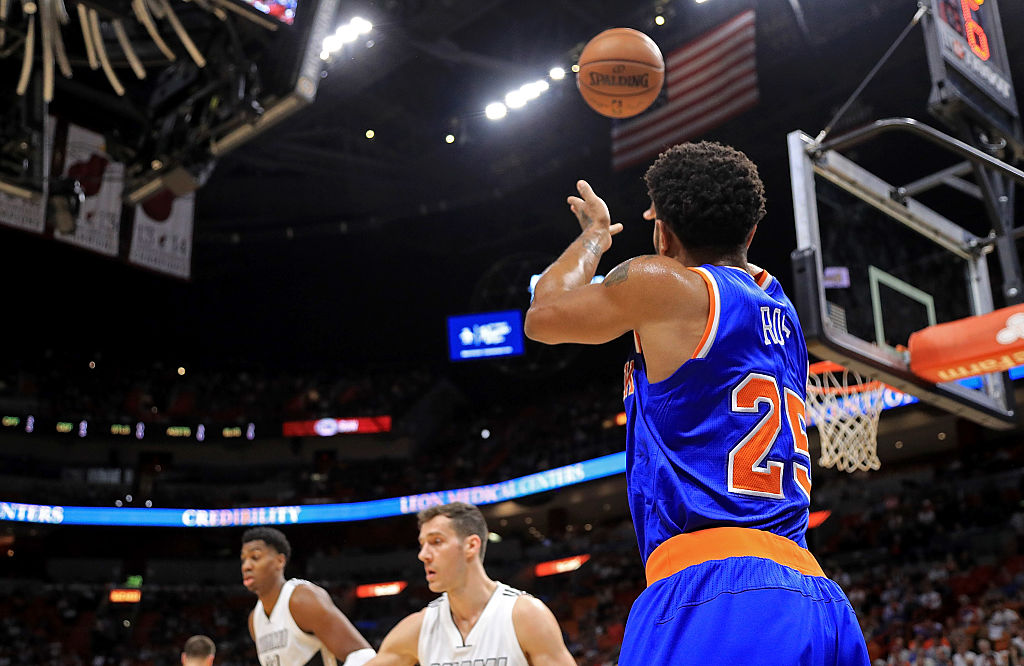 Carmelo Anthony’s 35 points led the Knicks to their fourth straight W, besting Goran Dragic (29 points) and the Heat. Kristaps Porzingis helped the cause with 14 points and 12 boards, and Joakim Noah showed signs of life with 10 points/10 rebounds. Derrick Rose took an early exit due to back spasms, but said the ailment “calmed down” after the game.

.@drose provides an update on back spasms suffered in the 2nd half. #Knicks #NYKvsMIA pic.twitter.com/cMG4u5fpnt

The Wizards have reached their nadir this season, coming away with a loss despite John Wall’s career-high 52 points. Elfrid Payton reached a career-high of his own, dropping 25 points in Orlando’s W. It’s been a start-and-stop season for Washington, who just earned a come-from-behind win in Brooklyn on Monday. After the game, a bewildered John Wall had no answers for his team’s performance.

John Wall was not happy with the Wizards' effort tonight in their loss to the Magic: pic.twitter.com/ujtHYit3Xt

It was an emotional return performance for Zach Randolph, who had missed Memphis’ last seven games following the death of his mother. Z-Bo, who secured a double-double in just 21:46 of court time, received love from Grizzlies fans in his 1,000th NBA appearance.

A much deserved standing O for Zach Randolph, who had taken a personal leave following his mother's passing. https://t.co/DJvn0N4WMx

The Joel Embiid and Jahlil Okafor-less 76ers had trouble contending with Marc Gasol (26 points, 12 boards), dropping their eighth straight despite an impressive double-double from Ersan Ilyasova. Considering they entered Tuesday with a nine-man roster, keeping tonight’s game close can be considered a moral victory of sorts.

The Pistons have now won four of their last five, behind Tobias Harris’  22 points (9-of-16 from the field). The Bulls weren’t without solid performances- Jimmy Butler dropped 32 points while Dwyane Wade had 19 with seven dimes- but their bench continues to be an Achilles’ Heel. Isaiah Canaan, Nikola Mirotic, Cristiano Felicio and Jerian Grant combined for just 11 points off the bench, compared to 33 points from Detroit’s reserves. Meanwhile, Rajon Rondo made his return from a team-imposed suspension:

Thibs is really rubbing off on the young players https://t.co/h9k89u4uqU