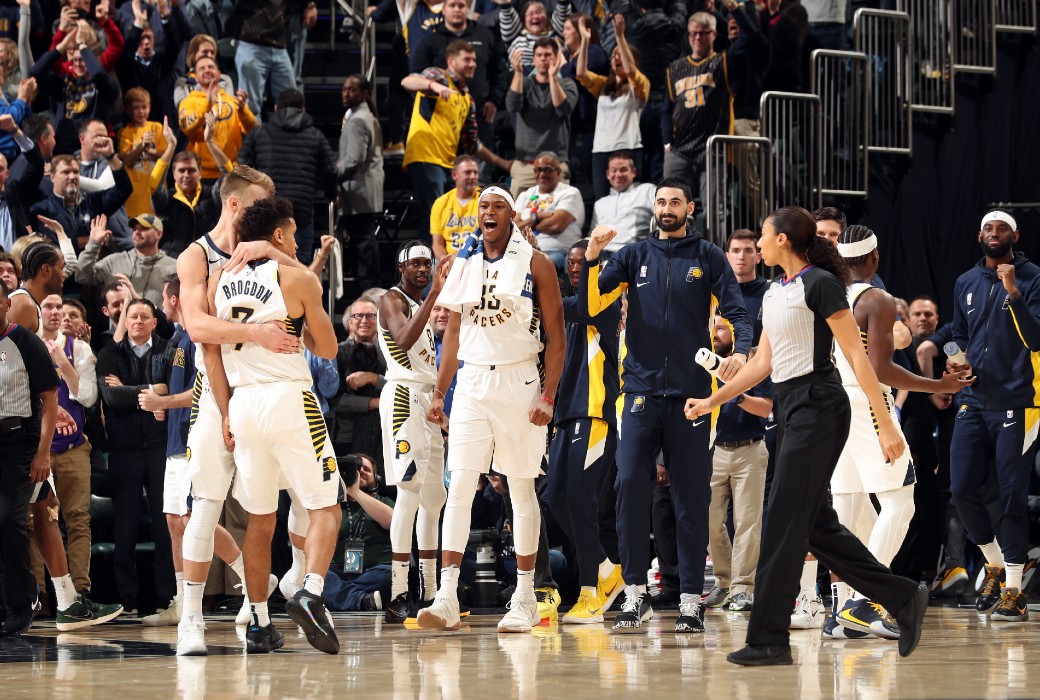 Malcolm Brogdon finished a tough, go-ahead layup with 36 seconds left to lift the Pacers over the Lakers, snapping LA’s 14-game road winning streak. The Lakers streak will finish as tied for the third longest in NBA history, 2 shy of the all-time record. For the Pacers, Domantas Sabonis recorded his 13th straight double-double, finishing with 26 points and 10 rebounds. Dwight Howard led the Lakers, dropping 20 points on 10-10 from the field. LeBron added 20 points, 9 rebounds, and 9 assists in the loss.

The Hornets outscored the Kings 30-23 in the fourth quarter to secure the win in Charlotte. Malik Monk led the way with 23 points and 10 rebounds on 9-12 shooting for the Hornets. De’Aaron Fox returned after missing 17 games with an ankle injury, dropping a team-high 19 points in the loss.

The Knicks’ 143 points is the most the franchise has scored in regulation in 39 years. New York was led by RJ Barrett, who dropped a career-high 27 points on 10-13 shooting. Mitchell Robinson also finished with a career-high of 22 points (9-13 shooting) to go along with 13 rebounds and 2 blocks. The Knicks’ youth movement is showing out under interim coach Mike Miller, who is now 3-3 since taking over for David Fizdale. Even in the loss, Trae Young went off for 42 points and 7 made threes. Vince Carter added 15 off the bench in his final game in MSG.

The Nets outscored the Pelicans 15-8 in overtime to pick up the win on the road. Spencer Dinwiddie led the way, finishing with a game-high 31 points. Joe Harris added 24 points, and Jarrett Allen finished with 12 points, 14 rebounds, and 6 blocks for Brooklyn. New Orleans was led by Brandon Ingram, who finished with 22 points and 10 rebounds in the loss.

The Jazz held off a late surge from Orlando to secure the win at home. Donovan Mitchell and Bojan Bogdanovic each dropped 30 points in the win, the first time since 2008 that two Jazz players finished with 30+ points in the same game. Rudy Gobert added 12 points and 19 rebounds in the win. For the Magic, D.J. Augustin scored 14 of his team-high 22 points in the fourth quarter.

Kawhi Leonard (20), Lou Will (24), and Paul George (20) all dropped 20+ points as the Clippers dominated the Suns in LA. For Phoenix, Deandre Ayton returned from his 25-game suspension and led the team with 18 points and 12 boards. Kelly Oubre added 19 points on 8-14 shooting in the loss.