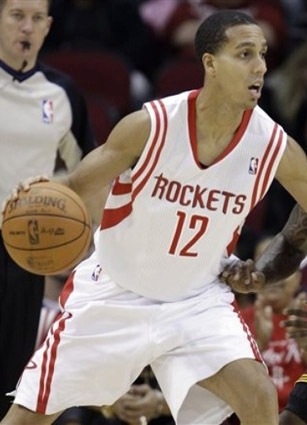 A Saturday night filled with streakers, oddities, and a very important message from your sponsors.

After losing to their better-looking LA team by a single point, more heartbreak was in store for the Clippers as Zach Randolph and the other Gasol led the way for the Grizzlies. Z-Bo had 18 points and 13 rebounds while T-Spain added 17. For the Clips, Eric Gordon scored 25 points as his partner in crime Blake Griffin backed him up with 19 points and 11 rebounds. The team as a whole did a decent job of holding Gay to just 12 points, but shot themselves in both feet with a season-high 27 turnovers. Baron Davis missed a potential game-winning jumper at the buzzer. I have to say that given Boom Dizzle’s awful play this season that he should not be featured on any ads. The Li-Ning spreads weren’t nearly as threatening with his face repping the brand.

A battle of wills resulted in the Mavs’ 12 straight victory with a win over the Jazz. Not wanting to hang onto their 25-point early lead, Dirk put the team on his back with his 31 points and 15 big rebounds. Jason Terry (14 points) also made key shots down the stretch while playing a two-man game with Nowitzki, their combined scoring accounting for the final 21 Dallas points. The Mavs put up some video game numbers, running out to a 29-4 lead while shooting 53% from distance (13 three’s) while the Jazz were within two points with  29 seconds to go before Dirk drew a double team and found his Jet in the corner for a dagger three-pointer. Utah relied heavily on Deron Williams for just about everything on this night, and D-Will responded with 34 points and 6 assists but couldn’t save his team with stops down the stretch. DeShawn Stevenson (yes, he still exists) added a season-high 17 for the Mavs as the team is now off to their best start since the 2002-2003 season and are really starting to get contributions from a variety of players. If they can keep this up and get some consistency from Caron Butler it will be interesting what kind of success the team will have come playoff time.

After a loss to the Spurs, the Hawks started off sluggish but eventually held off the Pacers, thanks to Josh Smith’s 21 points and 7 boards. J-Smoove shook off his early rust and made key plays down the stretch, including back-to-back three-point plays to extend the Hawks’ lead in the 4th quarter. Al Horford also played well, scoring 16 points in addition to grabbing 16 rebounds and dishing out 8 assists. The frontcourt was too much for Indiana to handle, especially on the defensive end. You know you’re in trouble when Mike Dunleavy (16 points) is your leading scorer.

Even with a fourth reserve center starting in place of the injured O’Neals, the Celtics dismantled the Bobcats so bad that Jordan was seen warming up at halftime in a Charlotte jersey. Big Baby and Ray Allen led the C’s with 16 points each while the Bobcats tried to play with a collective hangover, shooting 34% overall, including 9% from three-point range and 57% from the free throw line. Basically, if Paul Pierce is successfully chasing you down for a block, you’re done. Boston has now won 10 in a row, without a fully healthy line-up.

It had to happen eventually, right? After getting a number of second chances (but not a whole lot of minutes), Jerryd Bayless showed his promise, matching his career-high 31 points as he lead his Raptors in their biggest comeback win in franchise history to beat the Pistons. Trailing by 25 points by the third quarter, the Raptors stormed back the only way they knew how – by conserving their defensive efforts and focusing on making shots. Bargnani (22 points) had some key three-pointers in the 4th quarter to help swing the momentum for Toronto. Though Bayless was balling, he was also consistently getting beat off the dribble by Rodney Stuckey, who added 23 points and had a career-high 12 assists. Ben Wallace (23 points, 14 rebounds, 4 assists, 5 steals) had a Freaky Friday moment when he ran into Rip Hamilton’s body, temporarily giving him shooting powers as he hit a 3-point shot. I don’t know what’s more surprising, the fact that he hit the shot or that he’s hit four triples in his 15-year career prior to that one. Anyone see T-Mac’s put-back dunk? If you didn’t, it’s like Halley’s comet – the next time you’ll see it is in 75 years.

Derrick Rose and his Bulls made it 5 in a row with a win over the Timberwolves. Rose finished with 21 points and 7 assists including a career-high 5 three-point shots made. For the Wolves, Kevin Love continued his sensational play with 23 points and 15 rebounds. Love’s now averaging 15.7 rebounds a game (which, bears repeating, is crazy) so turn your SlamUps from SLAM 144 on the other side and pay respects to the man. The Bulls have a relatively easy schedule coming up and should take a comfortable lead in the central division.

The Cavs’ journey down the highway to hell brought them to the mercy of the Rockets, who invented new ways to defeat them. Kevin Martin dropped a cool 40 like a freshman trying to impress his peers, including 3-of-6 from distance and 13 of 14 made free throws. For the Cavs, Jamison “led” the team with 24 points. I use the term in quotes since the team has no real leadership. As of now, Byron Scott is tampering with line-ups to get some sort of consistency and effort. The benching of Cleveland’s only hope JJ Hickson has left him unhappy and the team’s future prospect Christian Eyenga is about as finished product as brake lines are on a Toyota. With payroll of $51.8 million, Cavs are looking to dumb Jamison’s albatross of a contract ($13.5 million this season) to dive into a full rebuild. Cleveland will see you in June, drooling at lottery prospects.

The Heat have now won eight games in a row, all in double digits including a coast over Sacramento. Dwyane Wade led his squad with 36 points, 6 rebounds, and 6 assists while LeBron paced himself to a 25 point, 10-rebound night. Opponents need to be careful as James did half a break-dance move after being knocked down, and we all know dancing strangely fuels his play. The Heat controlled the glass and the paint with Dampier making himself useful by altering shots, in one sequence blocking two and altering a third. Bosh rebounded well (17 rebounds to go along with his 14 points) but plays like the oldest 26 year-old player I’ve ever seen. The Kings played hard throughout the night, led by Omri Casspi’s 20 points, but were no match for the fast-breaking and shot-making Heat. Eric Reid was in full bias mode with one impressive compliment towards LeBron: “He now has 8 straight games with a 3!” Great Success! *Borat voice* At 80 years young, you’d think Kings assistant Pete Carril has enough seniority for a head coaching job, no?

“Check My $tats” of the night: Dirk Nowitzki – 31 points, 15 rebounds, 4 assists, 1 block. Kevin Martin’s 40 was tempting, Bayless is a good story, and Wade did his thing but I had to give it to a true MVP candidate fighting back for a win.

Separated at birth of the day: Rip Hamilton and Jar Jar Binks.

This is non-sports related public service announcement to ensure the safety of the SLAM family. Sharks are coming to kill us all. I’ve been saying this for years – sharks are laying low and waiting for us to drop our guard before devouring us. Don’t buy into the Discovery Channel’s “they’re all endangered!” propaganda, the evidence is now too big to ignore. In a six-day period in the Red Sea, five attacks on people have occurred (compared to six attacks in a decade in Egypt). The scariest part? Authorities have determined that at least two of the five attacks were done by a single, serial-minded shark. We need to summon our Flipper dolphin army to combat this threat immediately. If you’re planning a vacation in the area, do not go in the water for he lurks.