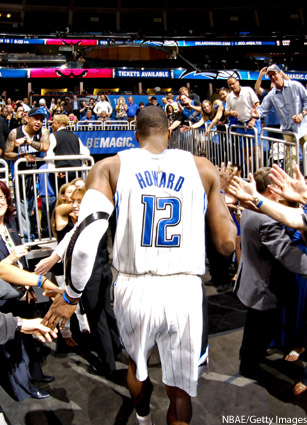 Welcome to the Trade Deadline. Between all the moves—Monta to Milwaukee in exchange for Bogut—and the ever-lingering Dwight Howard saga, we’ve still got real live basketball games to talk about. So let’s do that.

Jerryd Bayless had heard enough about Kyrie Irving’s fantastic rookie season, it seems. With Jose Calderon sidelined due to a bum ankle, Bayless won the point guard matchup in Cleveland, scoring 20 points and dishing out 7 assists while holding Irving to just 14 points (5-17 shooting) and 7 dimes of his own. In all 3 of the Cavaliers’ losses to Toronto this season, Irving has shot a combined 10-42. Andrea Bargnani, meanwhile, is starting to get his groove back, as he scored 19 points in his 29 minutes. Antawn Jamison led the Cavs with 20 points, but had just 1 assist and not a single rebound, block or steal in the game. The Raptors racked up 9 blocked shots and shot 50 percent, to just 38 percent shooting from Cleveland.

It’s tough to win a game when you only make 20 field goals, and such was Portland’s fate last night in Indiana. The Trail Blazers shot 31 percent from the field, making just 9 shots in the first half in what was a forgettable outing. The Pacers, on the other hand, got big performances from their second unit, including a career-high 21 points from Lou Amundson (yes, they were chanting “MVP!” in Indy, sarcastically one would have to hope) and sparkplug play from George Hill, who finished with 11 points and 3 assists, who helped run the show with Danny Granger and Paul George fighting early foul trouble. Portland was led by LaMarcus Aldridge’s 17 points and 10 garbage-time points from Nolan Smith, but no other Blazers scored in double figures. The Blazers recorded an NBA season-low 5 assists for the game (the Pacers had 24) and were outrebounded 50-38, thanks in part to Marcus Camby leaving in the first quarter with a shoulder injury.

If it was Dwight Howard’s last home game as a member of the Magic (which, based on his post-game comments it may not be), he certainly made it count. Superman racked up 24 points and 25 rebounds to lead the Magic to a win over the Heat, his 8th 20-20 game of the season. LeBron James had 19 points, 11 rebounds and 8 assists—crazy numbers on a night when it would be fair to say he wasn’t playing all that great. Dwyane Wade led the Heat with 28 points, and Chris Bosh added 23, but it wasn’t enough as Miami falls to 31-10 on the year and 1-3 in OT games on the road this season. Jameer Nelson drilled a 3-pointer with 44 seconds left in regulation to break a 91-91 tie, but Dwyane Wade immediately answered with a long-range bomb of his own. DWade had a chance to win it at the buzzer, but missed a step-back and the game went to overtime. Nelson’s scoring (he finished with 25 points) and Dwight’s defense won it in OT for the Magic, who are now 28-15 and No. 3 in the East, 4 games back of Miami.

Courtney Lee hit a 3-pointer with 15 seconds left to give the Rockets a 1-point lead, then Kevin Durant missed a jumper with under 10 seconds to play and Serge Ibaka couldn’t convert a point-blank putback and Houston handed Oklahoma City just its third home loss of the season (32-10 overall). Prior to that, after Russell Westbrook went scoreless in the third quarter, he picked up a technical foul and turned the ball over on consecutive possessions in the game’s final minute to give Houston the shot to take the lead, which they did. Durant led the Thunder with 28 points and 12 rebounds, while Westbrook had 19, but shot 7-18 from the field. The Rockets, playing without both Kyle Lowry and Kevin Martin, outscored the Thunder 13-3 over the last 2:30 of the game and got big games from Lee and Chandler Parsons, who each dropped 21 points.

Kobe Bryant got the Lakers to overtime by scoring 11 of his 34 points in the fourth quarter, but it was Andrew Bynum who led the Lakers, going for a season-high 37 points on 15-18 shooting and grabbing 16 rebounds. Each team had a chance to win it in regulation, and Kobe missed at the horn in the first OT, so these teams played two full extra periods before Los Angeles could pull away. With no Rudy Gay in the lineup for Memphis, scoring came from some unusual sources—Mareese Speights led the Grizzlies with 25 points, Marc Gasol had 20 and Tony Allen chipped in 18 points—but they hung tough for 5 quarters until the Lakers finally seized control. L.A. leaned on a huge disparity at the free throw line, where they outscored Memphis 28-5, and the Lakers held the Grizzlies to just 2-19 shooting from beyond the arc. Pau Gasol led the Lakers in assists, with 8 to go with 14 points.

What’s the best way to snap a 3-game losing streak? Welcome the Wizards to town, of course. The sputtering Mavericks looked more like the Champions last night than they have recently, getting 27 points from Dirk Nowitzki, 24 from Jason Terry and 19 from Roddy Beaubois en route to a comfortable win over Washington, which dropped its sixth straight on the road. Trevor Booker scored a season-high 20 points to go with 12 boards, and John Wall had 18 points and 10 assists, but the Dallas bench outscored Washington’s 50-28, the Mavs shot 51 percent from the field and outrebounded the Wiz 51-38. Dallas improves to 24-20, while the Wizards are still in search of win No. 10 on the season. Pray for me, y’all.

Josh Smith gave the Hawks a 2-point lead with 30 seconds left in regulation on a ridiculous spin-move on Nene, before Danilo Gallinari drilled one of this season’s most ridiculous clutch shots—a fallaway 3-pointer from the corner with 3.9 ticks on the clock. The Nuggets nearly gave up the 1-point edge when Kirk Hinrich was fouled on a runner in the lane, but he made just 1 of 2 free throws and the game went to overtime. In the extra period, Nene hit a pair of free throws in the final minute and the Hawks missed two chances to win it, including a very makeable layup at the buzzer for Zaza Pachulia that didn’t even draw iron. Denver went on a 6-0 run to finish the game out, improving to 24-19, despite season-highs in points from Smith (33), Joe Johnson (34) and Kirk Hinrich (22). Nene led the Nuggs with 22 points, while Ty Lawson delivered with a 21-6-7 line and Gallo finished with 19 points.

With Monta Ellis on his way to Milwaukee, rookie Klay Thompson stepped into the starting lineup for the Warriors, and Golden State promptly laid the beatdown on Sacramento, and they’ve now won 4 of their last 5 games. Thompson finished with 14 points, 5 assists and 4 rebounds, and Nate Robinson, who started in place of Stephen Curry (still out with that right ankle), scored 17 points—tied for the team-high of the night with David Lee and Brandon Rush. The Warriors shot 12-24 from beyond the arc, to just 7-19 for the Kings, and GSW dropped 50 points in the paint on SacTown, which for most of the game had little interest in defending. Golden State’s bench outscored the Kings’ bench 47-28 on the night, dropping Sacramento to 14-28 on the year despite a double-double from DeMarcus Cousins, who posted 19 points and 12 boards.

Moment of the Night: Gallinaaaaaaaaaaari! Danilo hits the ridiculous 3 and the Nuggs win in OT.

Dunk of the Night: Russell Westbrook goes boom to start the game against Houston.

Tonight: A dozen games on Wednesday, the last night before the 2012 Trade Deadline. Among the games you’ll want to take notice of are Sixers-Pacers, a potentially new-look Magic-Spurs matchup, Hawks-Clippers and oh yeah, you may have heard about these two teams from Miami and Chicago in the East—they hook up at 9 on ESPN.