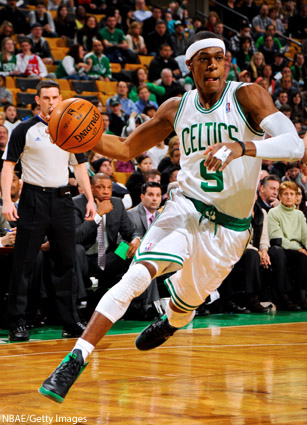 Some days are just basketball days. I woke up to Knicks-Celtics, took a halftime break to get up some shots of my own, then settled in for an afternoon-into-evening of hoops. And man, did the NBA deliver some greatness. Is there any denying this is a point guard League, people? Last night alone we had Rondo, Deron, CP3, DRose, Nash, Lawson…

With all the debate lately over who holds the title of League’s best pure point guard, Rajon Rondo—for at least one day—is forcing his way into the conversation. He notched his second triple-double in three games, this time with 20 assists, 18 points and 17 rebounds (a career-high), while his counterpart at PG, Jeremy Lin, scored 14 points but shot 6-16 and had just 5 assists to 6 turnovers. Boston let came back from a double-digit first-half deficit, and Paul Pierce drilled a 3-pointer with 4.9 seconds left in regulation to send the game to overtime. In the extra period, it was all Rondo, as he put Boston in the driver’s seat down the stretch with consecutive assists to Ray Allen, helping the Celtics improve to 19-17 on the year. Pierce (34 points) and Carmelo Anthony (team-high 25 points, 8-20 shooting) traded clutch buckets at the end of the fourth quarter—first Melo to the cup, then Pierce over Lin, then Melo over Pierce—before the lifetime Celtic dialed up from deep to sink the hearts of Knicks fans everywhere with a trey from the top of the key. Melo had one last chance to get the W in regulation, but missed a fading jumper form the corner. New York (18-19) got 14 apiece off the bench from Steve Novak and Iman Shumpert, 7 assists from Baron Davis, and Amar’e Stoudemire finished with 16 points and 13 boards, but had 22 team turnovers (6 from Davis).

Kobe Bryant scored 33 points, leading the Lakers to their 8th win in 10 games, exacting revenge on Dwyane Wade a week after the now-infamous hard foul in the All-Star game. The Mask shot 14-23 from the field and hit three big shots in a row in the fourth quarter—Kobe has scored 30+ in every one of his three games with the extra facial hardware. Miami, meanwhile, was without Chris Bosh again, and Dwyane Wade fouled out with more than 5 minutes left in the fourth (finishing with 16 points, 5 assists, 5 turnovers). Post-game, Wade complained about the Staples Center lights bothering him after being knocked around in the third quarter. In-game, Wade complained about four tough foul calls in a five-minute stretch of the fourth. Starting in place of Bosh for the first time since the 2009 Playoffs, Udonis Haslem had a forgettable game, going 0-5 from the floor with zero points and 2 rebounds in 19 minutes. LeBron James racked up 25 points, 13 rebounds and 7 dimes, but it wasn’t enough, as the Heat couldn’t get within striking distance in crunch time. The Lakers locked down on D, holding the Heat to 37.5 percent shooting, blocking 10 shots and feeding off defensive intensity from Metta World Peace, who had 4 steals, plus 17 points. The big fellas both had double-doubles—Pau Gasol with 11 and 10, and Andrew Bynum with 16 and 13.

Both teams shot under 38 percent from the field, but the Raptors had DeMar Derozan, who dropped 25 points to push Toronto past Golden State in a sloppy affair. The third quarter doomed the Warriors, whose 47-38 halftime lead evaporated in a heartbeat, as GSW scored only 11 points in the frame. Golden State was within 4 with just over two minutes to play, but the Raps closed things out simply by out-hustling the Ws, despite 22 points and 12 rebounds from David Lee and 20 points from Monta Ellis. Lee found Ellis for the game’s hottest highlight—a ridiculous spinning finish in traffic in the fourth quarter—but the Warriors were once again without the services of Stephen Curry, who dressed but did not play, nursing that sore right foot. It was a tough night for Nate Robinson (who shot 2-12 from the field and finished with 7 points) and Dorell Wright (1-9, 3 points).

Deron Williams wants his name in the No. 1 point guard talk, too. All he did last night was drop a cool 57 on the Bobcats, all of them much-needed, as the Nets escaped Charlotte with a 3-point win, moving to 12-26 on the year. Charlotte blew a 16-point lead, and now owns a 4-31 record. Williams brought New Jersey back from an 8-point halftime deficit thanks to 40 second-half points, including 22 in the third quarter. He scored more points from the free throw line alone (21) than the rest of the Nets starters scored total (20). Bottom line, dude was ridiculous. DWill added 7 assists and 6 boards, and the only other Net in double figures was Kris Humphries, who put up 11 points and grabbed 13 rebounds. The Bobcats shot sub-39 percent from the field, made 2 of 14 three-pointers, and were led in scoring by Corey Magette’s 24, despite his 4-12 shooting. Somehow, Charlotte was close enough to see a potential game-tying DJ Augustin heave at the buzzer fall short. Unfortunately for New Jersey, the awesomeness of Williams’ huge performance was countered by a not-so-awesome injury for Brook Lopez, who hobbled off the court after 15 minutes with a rolled ankle and left the arena on crutches.

Another crazy one from yesterday, featuring a ridiculous 20 ties and 24 lead changes. Chris Paul scored 28 points, dropped 10 dimes, only had 2 turnovers and overcame a couple non-CP3-ish plays down the stretch to lead the Clippers to an overtime win over Houston. With the game tied up, Courtney Lee bottled up Paul on the last play of regulation—Paul didn’t even get a shot off in time, though the one he fired up after the buzzer went in. In overtime, Blake Griffin stole a Houston inbounds pass with 50 seconds left and the Clippers up by one, then Samuel Dalembert returned the favor, scooping up a CP3 turnover, but the Rockets couldn’t get anything to go in crunch time. Kevin Martin (team-high 25 points) missed a 3-pointer at the horn that would have won the game for Houston. KMart clanked 3 jumpers in the last 1:06. Dalembert (17, 12, 3 blocks) and Luis Scola (16 and 12) each delivered with double-doubles—Griffin did too, with 14 and 11, but shot 5-14 and had 4 turnovers.

With the Bulls clinging to a 2-point lead and the clock ticking under 30 seconds, Derrick Rose stared down a Philadelphia double-team and said one big “eff you,” declining his option to swing the ball away from multiple defenders and instead driving right past them, swooping to his left, careening back to his right as he fell out of bounds and sinking a runner off the wrong foot to give Chicago a 93-89 lead with 20 seconds remaining. The Sixers cut the lead to just 3 with 8 seconds left, but the best Philly could get was an Andre Iguodala three that didn’t even draw iron. Rose battled two and three defenders down the stretch but still managed to rack up 35 points (20 in the second half) on 23 shots, plus 8 assists, plus long jumpers to beat the buzzer for both the second and third quarters. The Bulls shot 48 percent, to just 39 percent from the Sixers, and Chicago has the NBA’s best record at 31-8. Philadelphia did all it could to take down Chi-town, trying to push the pace and get out in transition (18 fast break points), but in the end the Bulls—well, Rose—made the winning plays down the stretch. Thaddeus Young led the Sixers with 17 points off the bench, and Elton Brand added a stellar 14-13-5 line in defeat.

The Suns won their third straight game, and in each of those wins, they’ve come back from down double-digit deficits. This time, Phoenix did it behind 19 points and 7 assists from Steve Nash and double-doubles courtesy of Marcin Gortat (14 points, 17 rebounds) and Channing Frye (11 and 10). Plus, the Suns got big boosts from Jared Dudley and Shannon Brown in the fourth quarter. Dudley scored 8 of his 14 in the fourth quarter, and 6 of Brown’s 13 points came on back-to-back three-balls down the stretch as PHX used a 15-3 run to open the final period and pulled away. DeMarcus Cousins had 16 points and 14 boards, but only two-thirds of the Kings’ three-guard lineup played well—Marcus Thornton scored 23 and Tyreke Evans had 17, plus 6 dimes, but Isaiah Thomas managed only 8 points on 3-13 shooting in 32 minutes.

Tim Duncan threw down a dunk with 30 seconds to play to get the Spurs within 1, but Ty Lawson stroked a clutch jumper with 11.1 seconds remaining to seal the game for the Nuggets, who improved to 21-17, and handed San Antonio just its 3rd home loss of the season. Lawson narrowly missed a triple-double, finishing with 22 points, 11 assists and 9 rebounds—he was the difference maker in this one, and it was his second straight game with 20+ points and 10+ dimes. Tony Parker led the Spurs with 25 points, but San Antonio never led and had no answer for Lawson and company in the open court, as Denver scored 24 fast break points on the night. The Nuggs spoiled Manu Ginobili’s return to the court—he scored just 8 points in 24 minutes off the bench after missing two weeks with a strained abdominal muscle. Tim Duncan had 14 points and 9 boards, and gave Birdman the biz at least once, but it was the Denver bigs that had all the spark in the second half. Al Harrington scored 16 points and Kenneth Faried was a wave of energy in the fourth quarter. Even so, the Spurs had a chance to tie the game late, but Gary Neal’s three rattled out in the closing seconds.

Line of the Night: Take your pick of point gods: Deron Williams’ 57 or Rajon Rondo’s 18 points, 20 assists and 17 rebounds. It was Rondo’s 5th straight game with 10+ assists, and he joins Magic Johnson and Jason Kidd as the only other players to drop a 15-15-15 triple-double in the past 25 seasons. Williams set the NBA season-high, his own career-high and Nets franchise record (unless you count Dr. J’s ABA days).

Moment of the Night: Paul Pierce takes the Knicks to overtime with a vintage clutch three, and Derrick Rose does something I’m not sure anyone else can do.

Dunk of the Night: Your Sunday nominees include Iman Shumpert, LeBron James and Gerald Green.

Tonight: 9 games, highlighted by Mavs-Thunder (my WCF pick) on NBATV at 8, plus Pacers-Bulls and Clippers-Timberwolves.