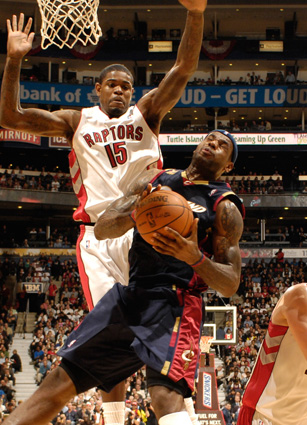 What a day, what a night. It’s just after 3 a.m. and I’m an exhausted girl. Accomplished girl, too. Finally managed to link up with Drake at halftime of the Raptors/Cavs game for a future project. That made my week right there.

The Raptors defeating the Cavs was just silly. 101-91. Lovely surprise, that one. Getting to write a feel good story for these amazing Raptors fans who read my daily stuff over at The Score was/is pretty awesome. So was the game. It was my first nba.com recap and, wow. After the Raptors were up 18 at the half, rather than feeling content in the victory, I felt like I was waiting for LeBron to become LeBron James and score 45 points in a half or something foolish like that to break Raptor hearts.

While he did end up with his 25th career triple-double (23/11/12), he also ended up with the “L” as the Raptors used a strong fourth quarter to bounce back after the Cavs tied the game up at 69 with 2:22 seconds left in the third quarter. With Bron on the bench to start the final quarter, Toronto pushed the lead to 13 before he returned and went on to the victory from there.

Andrea Bargnani opening the game with a baseline dunk was fantastic. The entire first half from Bargnani was exactly what the team needs from him. 21 points on 8-11 field goals at the half. Sure, he kind of disappeared in the third, but he finished with 28 points on 11-15 from the floor. I’ll take that every night. Especially when he’s working against Shaq on the defensive end of things.

One thing to notice about LeBron: Even when his new teammates don’t know where to go for a particular play and when they are lagging behind, trying to figure out the right cut or position to be in, James is entirely calm and composed. He DOES possess the patience of a point guard, motioning and gesturing to his guys where they need to be, then waiting for them to get there for the play to properly unfold.

He’s pretty impressive. And I don’t even mean on the court. Sure people will say he gives cliche answers, but give him a question that’s not a cliche. Ask something he hasn’t heard 20 times and I bet you’ll get something great from him in return.

Also impressive was the orchestra set up at half court playing “You Can Hate Me Now” for the Raptors player intros. Absolutely loved it. The Raptors staff definitely stepped their game up this season. The crowd here in Toronto was insane. The scout sitting beside me said it felt more like a college game during March Madness than an NBA game. Thought that was cool to hear. As someone who will be covering the games this season, I hope the energy level stays up, because it gets you jacked.

I missed everything not relating to this Raptors game tonight, but I was told that Carmelo Anthony had what Dwight Howard is already deeming, “dunk of the year.” Here’s a link. I’m going to check this out myself as well. Okay, okay, Mr. Melo, that was wild. After the season last year, the amazing donation to Syracuse this summer and then the cover story Lang did with him for SLAM, it’s been pretty awesme to see Carmelo grow from boy, to basketball star, to man.

21 and 15 for Dwight in a 120-106 Orlando victory over Philly. Marreese Speights led the way for Philadelphia with 26 points off of the bench. My pick for most improved player of the year, Ryan Anderson had 16 points for the Magic.

Charlotte and Boston was so ulgy it’s almost better not mentioning, sorry BETCats. Charlotte became the lowest scoring team in NBA history for a home opener, managing just 59 points in the game against the Celtics. Rajon Rondo had 10 points and 11 assists for the C’s.

Jermaine O’Neal had 22 points and 12 rebounds, Michael Beasley scored 21 and Dwyane Wade added 26 points as the Heat throttled the Knicks, 115-93 in Miami last night. David Lee had 22 points and nine rebounds for the Knicks as Danile Gallinari added 22 off of the bench and Wilson Chandler scored 21 in the loss.

Oklahoma City stand up! OKC with the 102-89 victory over the Sacramento Kings. Jeff Green put in 24 points, KD added 25 and 11 and Russell Westbrook had a 14-point, 13-assist, seven-rebound evening as the Thunder shot 51% from the floor. Kevin Martin scored 27 to lead the Kings, but shot just 5-of-19 from the floor.

Minnesota got the 95-93 win against New Jersey and one of my faves, Mr. Jonny Flynn scored 13 in the fourth quarter to help his team come back from 19-down. Flynn finished with 18 points, but it was Damien Wilkins who saved the TWolves, scoring on a putback at the buzzer. Brook Lopez continues to be pretty awesome with 27 points and 15 rebounds for the Nets. Rough night for one of my other faves, as Courtney Lee shot just 2-of-11 from the floor for five points.

Without Allen Iverson (and probably with him, as well), the Pistons pounded the Grizzlies, 96-74. Rip Hamilton scored 25 points while Ben Gordon added 22 off of the bench. six UConn alums in this game. Kinda nutty. Marc Gasol was one of the few bright spots for the Grizz, scoring 21 points to go with 15 rebounds.

While Chris Paul had 26 points and nine assists (and also five turnovers), the Spurs were smoother, taking the 113-96 victory as they had six players reach double figures, led by Tony Parker’s 17 points and Manu Ginobili’s 16 off of the bench. Emeka Okafor scored 18 points to go with 10 rebounds in his New Orleans debut.

It was Steve Nash who saved the Suns in a 109-107 win over the Los Angeles Clippers. 15 points in the fourth for Nash, none more important than the layup he hit with five seconds remaining to give his squad the victory. Nash finished with 24 points and eight assists, Grant Hill had 19 points and 13 rebounds and Leandro Barbosa added 17 points. The Clippers were led by Marcus Camby’s 23 points and 11 rebounds as Chris Kaman added 22 points and nine boards. Baron Davis added 12 points and 12 assists in the loss.