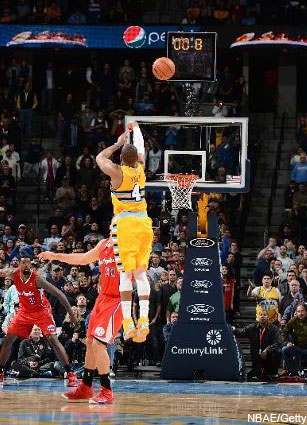 Fresh off just their second home loss this season, the Pacers got back to business with a romp over the visiting Magic. Good ole’ Danny Granger led Indy with 16 points and Paul George and Lance Stephenson each added 15, but Pacers jumped out in front with their stifling defense. Frank Vogel’s crew only allowed 29 Orlando points in the second half, good for a season low.

First-time All-Star John Wall scored 22 points, grabbed 5 boards and dished 5 assists to lead the Wiz to their first over-.500 record since 2009 with their win over Portland. The win broke a streak of 355-straight games in which Washington was either at or below .500. The Bucks now hold that streak at 62. The Blazers kept making rallies all throughout the game, but could never quite catch up to the Wiz. Nene’s jumper with 53 seconds left gave Washington an 8-point lead and sealed the deal for the home squad.

Dwayne Wade forgot he calls himself “Three” for the night and returned back to Flash mode. From the opening possession, wade was slashing through the paint and finishing at the rim. D-Wade finished with 30 points, 10 rebounds and 5 assists while LeBron nearly had a triple-double dropping 24 points, 11 assists and 8 rebounds. Still, the Pistons were somehow able to keep this one close, largely due to Miami’s 20 turnovers and the 28 points Detroit scored off of them.

Brooklyn had three players score 20 points and Sean Livingston messed around and hung 13 points, 8 assists and 6 rebounds on Philly. Paul Pierce knocked down all 14 of his free throws and en route to his 25, D-Will scored 21 and Mirza Teltovic drained five three-pointers off the bench for his 20. The Sixers gave a valiant fourth quarter effort, outscoring the Nets by 9 in the final period. But Livingston’s clutch free throw shooting down the stretch iced this one with Jay Z, Beyonce and Super Bowl champion Russell Wilson sitting courtside.

The Knicks and Bucks were dead-locked at 98 and Brandon Knight got the rock.

The triple with 1.4 seconds remaining was the difference in this one, finishing off Knight’s 25-point, 7-assist performance to avenge the Bucks’ OT loss to New York in Milwaukee in December. If you’re wondering why the Bucks broadcast showed that family celebrating the game-winner, that was the Greek Freak’s fam in the stands. Raymond Felton’s poor defense wasted a cool 36 points form ‘Melo.

No Manu, No Kawhi, No Problem for Tony P. Parker dropped 32 points and dished 9 dimes on the game and he and Duncan schooled the Pels in the half court on a number of pick-and-rolls in the fourth quarter. Anthony Davis was ridiculous in the loss, going for 17 points, 15 rebounds and 4 blocks.

The Grizz brought their grit-and-grind pace to OKC, but it still wasn’t enough to stop the NBA’s best team through 50 games. Kevin Durant dropped 31 points and flirted with a triple-double adding 8 rebounds and 8 assists. Don’t sleep on Serge Ibaka either, he posted his own 21 and 12. Memphis desperately needs some consistent three-point shooting. The Grizz hit on just 2 of 16 attempts from outside while failing to keep up with the Thunder on the scoreboard. Mike Conley would’ve really helped in this one.

The Cavs had all five starters in double-figures and Anthony Bennett and C.J. Miles combined for 21 off the bench, yet that still wasn’t enough to compete with Dirk and Monte. The Big German dropped 16 points in the first half but the Mavs’ made a run in the second half, led by Devin Harris, that really blew this one open. Dion Waiters didn’t help his case to get traded out of Cleveland, going 0-4 from the filed for 0 points in 28 minutes.

Matched up against his old team, Randy Foye wanted to win badly.

A ridiculous falling triple at the buzzer is a good way to make everyone forget about Blake Griffin’s 36-point and 11-rebound performance. But Foye wasn’t the only Nugg of the night, Kenneth Faried poured in a career-high 28 points to go along with 11 rebounds.

DeMar DeRozan continued his All-Star season by hanging 23 points on the Jazz, but Toronto got a big night from Jonas Valanciunas that pushed them over the edge. The big man over powered Enes Kanter and Rudy Gobert in the paint on both sides of the floor, looking solid in post ups and protecting the rim as well. The Vegas Summer League MVP finished with 18 points and 9 rebounds.

Boogie Cousins returned to the court for the first time in 6 games and he made his presence known. Cousins scored 25 points and grabbed 16 rebounds to lead the Kings in a home route over Chi-Town. You have to feel for Tom Thibodeau. Thibs was visibly frustrated storming the sidelines tonight. Dude needs a hug.