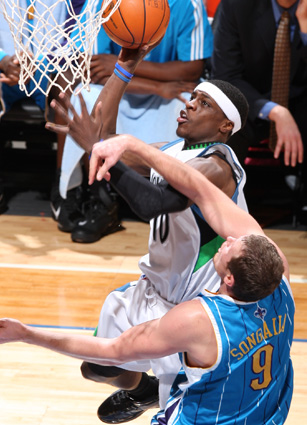 Oh, Jonny Flynn. One night after the behind-the-back pass that led to the Turkoglu steal and dunk to break a tie and ignite the Raptors, Flynn got caught turning his head as Chris Paul slipped past him and got the layup to give the Hornets the one-point victory.

The part that hurts the most about the loss? On the second night of a back to back, the Wolves were up 16 in the second half, before allowing the Hornets to come back. Ouch. The Wolves are playing better, but they’ve got to learn to close these games out. Rookie seasons are for learning lessons and making mistakes and Flynn is doing both. Here’s to hoping the learning curve stays steep and the mistakes slow with time.

Chris Paul had 15 points and 14 assists as he continues to bring the Hornets back to .500. It’s always good to see Peja back to scoring and he drained 5-for-6 from beyond the arc last night as he was good for 21 points. Such a tough loss for the Wolves when they shot 52 percent and outrebounded the Hornets 49-29.

Okay, its not NBA, but did you all see John Wall will Kentucky to a victory over UConn last night? This guy is so calm, cool, collected, poised and freaking EXPLOSIVE. He’s a joy to watch. I only saw the final minute of the game because I didn’t realize it was hidden in the sports channels on my TV, but I was thankful I got to see the finish. I’m so excited to think of a tournament with this young guy in it.

Speaking of talented young guys, Brandon Jennings got himself back on track last night, against the Raptors, of course. Before you hate on the Raps, they were without Jose Calderon (sore hip) and Andrea Bargnani (sore right ankle), and they looked tired. Jennings was fantastic in the first half, scoring 14 points in the opening quarter, hitting 4-for-6 from deep and finishing with 22 points, six assists, two steals and two blocked shots.

He also scared me when he went down with a hyperextended knee late in the third quarter. Seeing him limp around the court and then fall down by the Bucks bench made my stomach turn. Thankfully, he was okay.

The Cavs were a little out of sorts against the Rockets. Houston used a 19-2 run to close the first quarter, leading 33-19 after the opening 12 minutes of play. From there, the Cavs sort of lost their cool, with Mike Brown getting ejected and Delonte West, Mo Williams and Shaquille O’Neal all getting called for technical fouls. The Cavs had more turnovers (20) than they did team assists (18) as the Rockets got a big win and stand at 12-9 on the season. Trevor Ariza and Aaron Brooks led the way with 26 and 27 points, respectively. 12-for-13 from the free throw line for Brooks, four 3-pointers for Ariza.

Also, there was no dancing.

I thought the Nets were going to get the W against the Warriors, but it wasn’t meant to be with Golden State busting out to take the 105-89 victory after outscoring NJ 38-21 in the second quarter. Question concerning the Nets: What does Josh Boone have to do to start hitting his free throws? The guy’s shooting 40 percent on the year and they are just so damn ugly. He’s always been bad, I know, but it blows my mind when guys just can’t get better, after shooting them day after day in practice.

Love, love, love the Jazz retro uniforms. Impressive, impressive performance from Utah in Los Angeles, although you sort of knew, as soon as Phil called that timeout in the third q, that they were going to dial in and get the job done. And, don’t say I’m giving the Lakers too much anything. They held Utah to six points in the fourth as they turned a close game into a blowout.

The Detroit/Philadelphia game was a little tough to take. I hate everyone calling Allen Iverson old. He hasn’t played in a few weeks, he isn’t 24 anymore and it’s going to take some time. Also, the six turnovers were probably a result of playing the team where this whole mess of him not being a starter started in the first place. I wanted the Sixers to get this game because losing 11 games straight is just rough. The play by Rodney Stuckey, to get back the possession after he was stripped by Iguodala and drain the bucket with a second on the clock was lovely. Just a great play by a player who reacted a step ahead of everyone else on the court at that moment.

Speaking of rookies…. Jonas Jerebko. He had 17 points and 10 rebounds last night and he played a huge part in the Pistons victory, as they were without Ben Gordon and Rip Hamilton.

The Kings lost to the Spurs last night and yet they are still 9-12 on the season. I’ve been blown away by how well they’ve played in both their wins and losses this year. Casspi and Evans have been awesome. They’re doing this without their leading scorer. It’s kind of a perfect feel-good story, right?

Also since we’re talking Kings… A little Cuse love: Donte Greene’s been pretty good this year. It’s great seeing him settle in and start producing for his team.

118-83. Man the Hawks have been on the good side of some crazy lopsided victories this season. Not sure what to make of the Bulls. I’d just like a healthy Rose… As would my fantasy team. Jamal Crawford had 29 points to lead the Hawks off of the bench as the Bulls gave up 50 percent shooting to Atlanta while shooting just 36 percent themselves.

Anyone else excited at the thought of the ovation Chauncey Billups will receive from the Detroit crowd tonight? Makes me smile just thinking of it. TNT Thursdays. It doesn’t get any better.