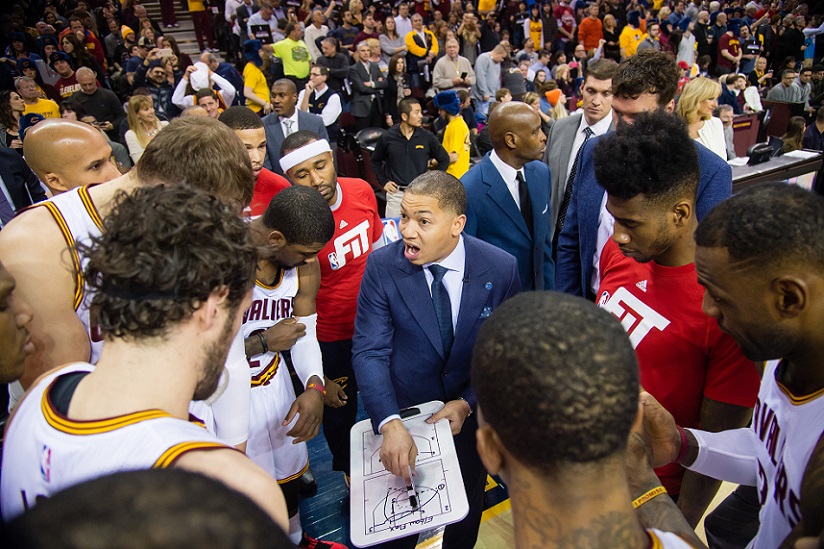 Tyronn Lue’s first game as Cleveland’s head coach didn’t go as planned. After making brash comments earlier in the day, Lue’s Cavaliers trailed by as many as 17 points and were soundly booed by those attending the Quicken Loans Arena.

With all eyes on LeBron James, the four-time MVP notched 26 points, coming one dime short of a triple-double. Inaccurate shooting doomed the Cavs, however, as the team posted a woeful 40.9 free-throw percentage on the night. With a double-double from Pau Gasol, and double-digit scoring efforts from Jimmy Butler, Nikola Mirotic, Taj Gibson, and Derrick Rose, the Bulls snapped a two-game skid on ESPN’s national stage. After the game, Lue didn’t exactly give a ringing endorsement of his squad’s effort.

The Hawks and Suns engaged in a wild shoot-out, concluding in this chaotic fourth quarter sequence:

While free agent-to-be Kent Bazemore posted 21 points, and Dennis Schroder added 19 off the bench, this game was defined by Tyson Chandler and Archie Goodwin. Chandler’s 27 boards tied a franchise record, while Goodwin shined in the paint and from downtown. For a team that’s experienced a first half rife with turmoil, the Suns looked legit in Saturday’s home victory.

Jeremy Lin enjoyed a revenge game, dropping 26 points with five boards and five dimes against his former team. Not to be outdone their teammate’s Linsanity, Kemba Walker and P.J. Hairston combined for 46 points. On the cusp of contention in the Eastern Conference, the Knicks have now dropped two straight; a situation compounded by an apparent injury to Carmelo Anthony.

Ricky Rubio distributed 12 assists, and Shabazz Muhammad dropped 25 points en route to a tightly contested win over Memphis. While the Grizzlies weren’t without solid performances of their own — Marc Gasol and Mario Chalmers combined for 36 points — the game was decided on a controversial foul drawn by Ricky Rubio. Check out the footage below at 1:35 to reach your own conclusion: valid foul committed by Mike Conley, or a flop from Rubio?

New Orleans’ recent performance makes one wonder how the team would have performed with a healthy Anthony Davis and Tyreke Evans all season. Ryan Anderson went off for six three’s, while Davis stuffed his stat sheet for 22 points, seven rebounds, and five assists. Despite a posterizing dunk from Jabari Parker, the Bucks fell to a 35 percent winning rate on the road.

The recent spotlight shown on Andre Drummond’s free-throw shooting may have resulted in diminished court time. After watching Drummond miss all four of his attempted free-throws, Pistons coach Stan Van Gundy tended minutes to Aron Baynes toward the end of Saturday’s loss. Meanwhile, Danilo Gallinari capped his 30-point showcase with an unlikely triple to cinch a W for the Nuggets.

Kobe Bryant played his last ever game in Portland, but the story in Saturday’s game was Damian Lillard. Lillard dropped 36 points on L.A., assuming fourth place in franchise history for three-pointers made. C.J. McCollum scored 28 of his own, and Gerald Henderson posted 10 points with five boards off the bench.

The Pacers had no answers for DeMarcus Cousins, as Boogie went off for 48 points with 13 boards. As evidenced by this brutal post-up of Lavoy Allen, Cousins had a field day with Indiana’s short-handed rotation (Ian Mahinmi remains out with a sprained left ankle). Battling fatigue, Paul George still managed to lead his beleaguered team with 34 points.

Between quarters, Paul George was on his back getting his legs stretched out. For a while now he's openly admitted his legs are tired