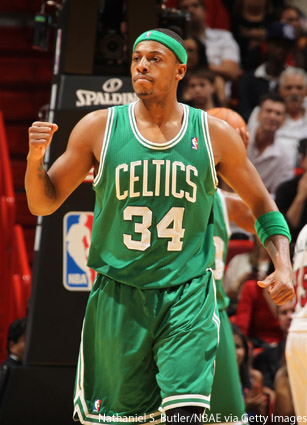 Different location, same result. Only a couple weeks after taking the new-look Heat down at home, the Celtics went into Miami and took care of business once more. They jumped out to a 15-point halftime lead, and though LeBron and Co. did their best to get back into it, it just wasn’t going down for them last night. Boston had all of its pieces moving: Ray Allen scored 35 points off 7 three-pointers; Paul Pierce dropped 25; Rajon Rondo commanded the ball, distributed 16 assists, and did this to a poor and unsuspecting Chris Bosh (video embedded below); and Kevin Garnett went for 16 and 13 in the win.

The Heat, meanwhile, didn’t have the same fire. Bron was solid, putting up 35 points and almost banging out a triple-double with 10 boards and 9 assists. But that was about it. Dwyane Wade shot 2-12 and scored only 8; Chris Bosh, in what was supposed to be a big opportunity for him to prove his worth, did no such thing and went for 15 and 7; and though Udonis Haslem (21 points, 10 boards) was solid, Miami’s bench wasn’t of enough assistance. These guys are now 5-4, though, for what it’s worth, they’ve fallen to some great teams as of late: a Jazz squad led by Paul Millsap’s unreal heroics; a streaking and seemingly unstoppable group of Hornets; and now the Celts, undoubtedly the East’s best at this point.

Last note: Apologies for the slightly incomprehensible dek above. That new Kanye leak, er, advanced copy, has been bumping in both my headphones and the SLAM Dome all day, and I felt compelled to work it in here somehow. But, if I may say, it kind of fits. What, you don’t think the Truth reallllly enjoyed this one? Peep his post-game tweet:

I had a weird feeling that while the world was watching the Celts and the Heat battle it out, the Warriors and the Bulls would go at it, with Steph Curry and Derrick Rose going head to head in what I figured would the slept-on game of the night. Well, like Biggie and Eminem, this guy was dead wrong. Chicago jumped out to a huge lead in the first half and held on in the second, playing fast and dominating GSW for the contest’s entirety. DRose (22 points, 13 assists) did his thing, while Luol Deng had an impressive 26-11-6 stat line in the W. Their team shot 54.8 percent (46-84), and when that kind of thing happens, the chances of coming home with a victory are pretty damn high.

The Lakers looked like they’d take this one going into the fourth, until the Nuggets turned on the jets and took off in the final quarter. Kobe scored 34, but didn’t shoot too well (11-32), and Carmelo’s more efficient 32 off 14-25 shooting ended up on top. Los Angeles is now 8-1, leaving New Orleans as the only undefeated team in the L (you see that coming?). The Lake Show hosts Phoenix on Sunday.

Performance of the Night: Ray Allen: 35 points, 7 three-pointers, 1 rebound.
Moment of the Night: Chris Bosh asked, curiously: “Why do people keep calling me soft?” And Rajon Rondo answered: “Here, let me show you.”