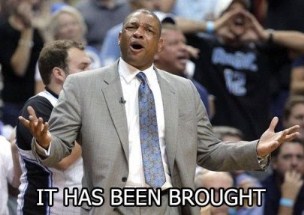 The playoff-bound Pacers played with training camp intensity as they took down the Hawks, led by Danny Granger’s 28 points. Darren Collison continued to evolve as a point guard, scoring 16 points and dishing 10 assists while Indiana kept the pedal on Atlanta’s (lack of) mettle. Jeff Teague scored 21 points off the bench but the game was well within Indiana’s control from the 1st quarter onwards. The Pacers have won five of their last six games while averaging 109 points leading into the post-season.

The Seattle Supersonics gave them nothing, and took everything. Playing their likely 1st round opponent in the Nuggets, OKC demolished any hope of Denver gaining any mental advantage going into the playoffs. Kevin Durant led the way with 28 points and OKC poured in 39 bench points to keep the Nuggets from getting within 9 points in the game. Nene bounced back after a poor game earlier in the week, leading Denver with 18 points but the Thunder established their identity on the defensive end and benefitting on the offensive end as a result. OKC have held 12 of their last 14 opponents under 45% shooting and look prime for the post-season. Goliath best be prepared, because David is ready for battle.

Carmelo Anthony had no problems being the go-to man, scoring 25 points and grabbing 14 rebounds as he led his Knicks over the Nets. Brook Lopez scored 27 points for New Jersey and doubled his usual rebounding numbers (all the way up to 2 boards) but the Nets didn’t put up much of a fight as the entire 4th quarter served as garbage time. Just 4 more years until the Nets are world champions.*

*statement has no legal binding, as co-signed by Mikhail Prokhorov.

The Sixers snapped their three-game losing streak as they proved too much for the Raptors down the stretch. Elton Brand scored 22 points while Philadelphia held off Toronto’s 4th quarter surge, led by Jerryd Bayless’ 24 point including triple dipping to bring the Raptors within 3 points with 28 seconds to play. Still trailing by three, Bayless air-balled the potential game-tying shot as time ran out. Raptors fans, I seriously don’t know how you listen to your color commentators. No one should be that excited about double-doubles.

After being emasculated by the Bulls on national television, the Celtics picked up the pieces of their pride and defeated the Wizards. Rondo (20 points, 14 assists) returned to his usual form, dishing out more assists than the entire Wizards team and all five Boston starters scored in double figures in the game. John Wall had 20 points and 7 assists (with 7 turnovers) but the Celtics shot 59% in the game and used a strong 3rd quarter to extend their lead and set up a Sunday showdown for the 2 seed in the East against the Heat.

The Bulls clinched the best record in the East as they beat the Cavs, led by spray paint beard artist Carlos Boozer’s 24 points and 11 rebounds. J.J. Hickson had 22 points and 15 rebounds (any GM’s interested yet?) but Chicago blew the game open on an 18-6 third quarter run including 10 straight points to keep the Cavs at bay. The joke is on you, Chicago – the Cavs are going for the #1 spot in the lottery. Special shout out to Joe Tait, Cleveland’s radio play-by-play man who is retiring at the end of this season. Joe has called 39 years’ worth of Cavs games – 3,381 to date. His last broadcast is on Wednesday against Washington. You will be missed, Joe.

Despite re-gaining his scoring mojo, Brandon Jennings (31 points) and the Bucks came up short against the Pistons. Chris Wilcox had a season-high 27 points and 13 rebounds and Detroit had a handle for most of the second half, an 11-2 run keeping them ahead by double digits. Milwaukee trimmed the lead to 6 points with less than 3 mines to play but Rodney Stuckey scored 8 of his 22 points in the 4th quarter, sealing the game with two free throws. As the Pistons are now under new management, I provide the courtesy of informing new owners about the intricacies of their new position.

Do – Celebrate. You’ve just purchased a historic franchise, throw yourself a party! I recommend renting out the entire arena to fans and dancing around on stage.  Why not raise a few “Mission Accomplished” or “Yes We Can! (Purchase Your Team)” banners while you’re at it?

Do – Purchase a new arena. Do you remember when the previous owners described the Palace at Auburn Hills as a “fixer upper”? They might have been understating it.

Don’t – Move the team outside of Detroit. Especially when most season ticket holders know their way around the mechanical components of automobiles.

The previous two ownership families were around for about 30 years each. Good luck, Tom Gores.

Dwyane Wade wasted no time upon his return against the Bobcats, scoring 27 points, hounding on the defensive end, and buying a condo at the free throw line as the Heat won their 55th game of the season. Chris Bosh scored 13 of his 27 points in the 4th quarter as the scrappy Bobcats kept the game close, erasing a 14-point deficit to pull within 6 with 1:29 to play. The Heat executed down the stretch as LeBron’s pass led to a Bosh layup to stretch the Miami lead to 8 points. Kwame Brown continued to spread rumors that he’s serviceable by scoring 23 points and grabbing 13 rebounds. Any reason why Big Z is suddenly starting for the Heat? My guess is that Spoelstra wants to keep his elbows ready for the playoffs.

The Grizzlies punched their ticket to the playoffs for the first time in 5 years with a win over the Kings. Zach Randolph led Memphis with 27 points and 15 rebounds while all starters scored in double figures. Marcus Thornton had 18 points for the Kings but missed a three-pointer that would have tied the game with 10 seconds to play, giving Randolph the opportunity to seal the win with a pair of three throws.

The Hornets took down the Suns, mostly due to the rise of role players. Willie Green, who averages 8.4 points a game, scored a season-high 31 points on 71% shooting as he wrapped up his performance by burying Phoenix with jumpers in the last 6 minutes of the game. Jared Dudley led the Suns with 18 points, but even shooting 50% as a team could not slow down the hot hand of the Hornets. Green was 12-of-12 in the game before missing five shots in the 4th quarter.

The Mavs completed their season sweep against the Clippers as Corey Brewer gave Dallas a spark in the 4th quarter. Brewer had 20 points, 6 rebounds, 4 assists and 4 steals the Mavs came back from a 16-point deficit, capping off the comeback with a steal by Brewer that led to a dunk by Dirk (20 points, 8 boards, 7 assists). Mo Williams had 29 points and Blake Griffin scored 23 in a seemingly early blowout as the Clippers paraded into the lane, scoring more 1st quarter points in the paint than the entire Mavs team had overall. Dallas turned the game around early in the third quarter with a 22-4 run but also distributed the ball inside, gaining a 58-42 advantage in the paint to finish the game. Move, Cardinal, get out of the way.

The Lakers lost their 4th straight game as they fell against the Blazers, giving the defending champions no guarantee of the 2nd seed as Dallas won earlier in the night. LaMarcus Aldridge led Portland with 24 points and 11 rebounds while Kobe had 24 points, taking more than twice as many shot attempts as Gasol in a game where the Blazers led by as many as 24 points. Phil Jackson on the loss: “These guys just don’t to play hard right now.” L.A. either has issues that will cost them in the playoffs or are doing a terrific job playing possum.

*just not in the clutch.

Separated at Birth of the day: Kevin Love and Paul Wall.

If you’re ever faced with a critical decision, make sure your Vitamin Water to books ratio is at least 3:1.

Say what you want about the Raptors, but they walk in solidarity.

This Kobe interview is old but Peter Mehlman always delivers the goods.

Most likely staged, but dunking while talking on your phone is impressive and sad at the same time.