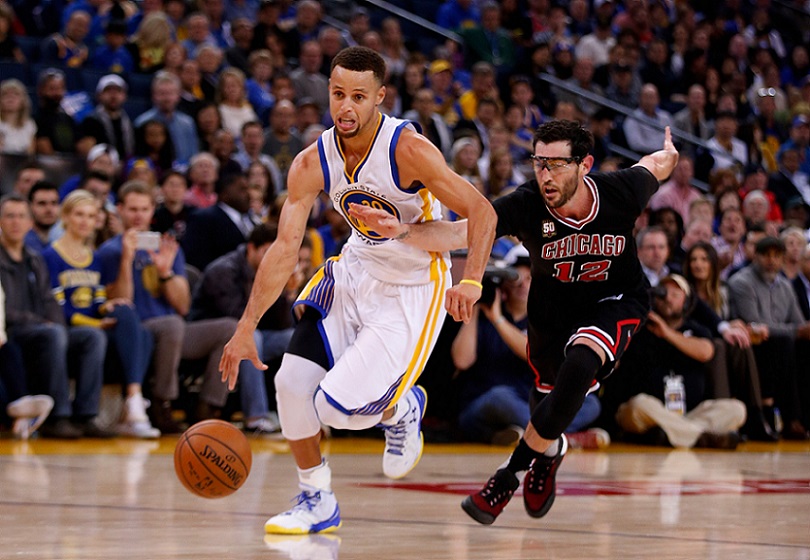 The Warriors’ historic run continues. Despite an excellent performance from Jimmy Butler – the 26-year-old scored 28 points with 9 rebounds and 7 assists – Golden State improved to 14-0. In addition to 27 points from Steph Curry, the Warriors received strong efforts from Harrison Barnes (20 points) and Klay Thompson (15 points). Steph Curry provided some fireworks in the first quarter by setting Andre Iguodala up for a monster jam.

New coach, same problems. The Rockets continue to struggle after the dismissal of Kevin McHale, as Mike Conley and Marc Gasol had little problem posting big numbers at home.

Andre Drummond posted a double-double en route to a gritty win over the T’Wolves. Andrew Wiggins played well in a losing effort, including an impressive two-handed dunk in the second quarter.

What a difference one player can make! After missing action Wednesday with a shoulder injury, Anthony Davis returned to the Pelicans lineup and reinvigorated the team with 18 rebounds and 20 points. Ryan Anderson, who’s posted excellent numbers to little fanfare, did his part as well with 30 points and 7 rebounds.

The Thunder dropped a close game after a head-scratching sequence in the game’s final possession. Having started the season at an underwhelming 7-6, expect OKC to be subject to scrutiny.

The Knicks just won in OKC without a competent point guard and with Robin Lopez having a crunch-time seizure. Are we sure OKC is good?

A double-double from Zaza Pachulia and a clutch bank shot from Wesley Matthews helped Dallas to their sixth straight victory.

Despite briefly leaving the game with an ankle injury, Brandon Knight posted a career-high 38 points with 11 rebounds and 6 assists. Meanwhile, Nuggets head coach Michael Malone was not too thrilled with his team’s performance after the game.

"I think we have some guys on this team that pick and choose when they want to play. They're not going to play" #Nuggets coach Mike Malone

When you’re 0-13, you have to find the silver lining whenever possible. As such, 76ers fans can enjoy this video of Jerami Grant posterizing Frank Kaminsky.

The Trail Blazers pulled away late in the game, as Damian Lillard landed a three from far beyond the arc to put this one out of reach.

Despite going on a 12-2 run in the fourth quarter, the Lakers were no match for the surging Raptors on Friday. Kyle Lowry led Toronto with 25 points.