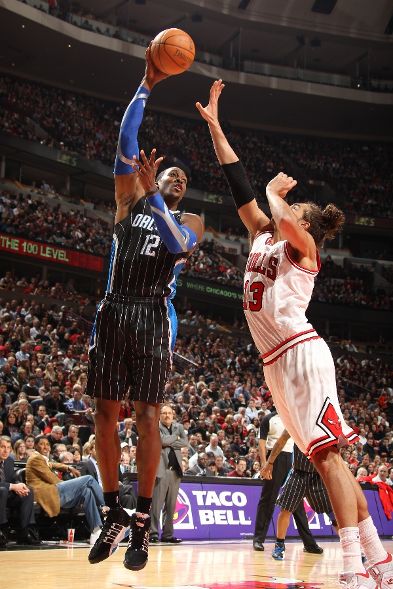 So if one game the Bobcats beat the Magic, and the next game the Magic beat the Bulls, then the Bobcats are the best team in the Eastern Conference, right? Marinate on that while we get the facts from yesterday’s light night.

Last time out, Orlando lost to the Bobcats. Last night, they made up for the momentary embarrassment by beating the Bulls, behind a monster game from Dwight Howard—who racked up 29 points, 18 rebounds and 3 blocks—and a clutch 3-pointer from Ryan Anderson with just over a minute to play that broke a 91-91 tie. The Magic snapped Chicago’s 8-game winning streak, and the last time Chicago lost a game with Derrick Rose in the lineup was February 1. Rose finished with 17 points and 9 dimes but shot just 6-22 from the field. The Bulls twice rallied from double-digit deficits in this game, and even took a 2-point lead with 2:56 remaining on a Carlos Boozer (26 points, 7 rebounds, 4 steals) jumpshot off a DRose feed. But Orlando (26-15) fired back with an 8-1 run and closed out Chicago, dropping the Bulls to 33-9.

Dallas held a double-digit lead late in the second half, but Phoenix used a 20-4 run sparked by 12 of Jared Dudley’s team-high 18 points to regain the lead, eventually holding one final furious comeback try from Dirk Nowitzki and company to take home the win. The Suns took an 8-point lead on a Grant Hill jumper with 3 minutes to play, but Hill missed a pair of free throws with under 20 seconds left and PHX only up 2, leading to a pair of chances for the Mavs to tie things up—luckily for Hill, Roddy Beaubois missed a driving layup, then a wide open look from the top of the key, and that wrapped things up. Steve Nash dished out 11 assists to go with 11 points and Marcin Gortat did his double-double thing with 16 points and 12 boards. Nowitzki and Carter led the Mavs with 18 apiece in the loss. The Mavs are now 23-18 and No. 6 in the West.

Moment of the Night: A Dwight Howard interview without a hint of a smile? You know it was a big W.

Dunk of the Night: Yes, Shannon Brown is still alive and well.

Tonight: I’m out for the weekend, which starts tonight with 10 games, the best of which is Clippers-Spurs. Others to keep an eye on include Wolves-Lakers, Jazz-Sixers, Blazers-Celtics and Nets-Bobcats (kidding). Have a good weekend, everyone.