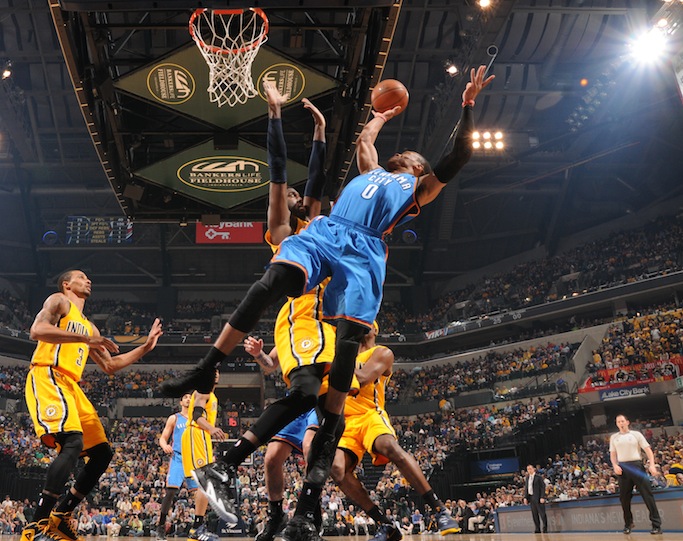 Cleveland rested its stars yesterday and trailed by 24 at the break.

Milwaukee only lead by a bucket at halftime before smoking Brooklyn in the third and fourth quarters last night.

Ersan Ilyasova knocked down 3 threes on his way to 21 points, and OJ Mayo added 17 off the bench.

Detroit outscored Charlotte 30-10 in the first quarter last night and the Bobcats never got back in the game.

On the (very) bright side, Noah Vonleh posted 16 and 12 for the Bobcats in 29 minutes off the bench.

Denver dropped 37 in the first quarter and another 34 in the third en route to a fun win. Kenneth Faried posted 30 and 7, and Wilson Chandler scored 21. Following his 47-point eruption, Danilo Gallinari hit 4/8 shots for 14 points.

Sacramento got 22 from Omri Casspi and 20 from Ben McLemore. Rudy Gay and DeMarcus Cousins both sat out.

Worse: Westbrook picked up his 16th tech of the season and is subject to suspension for the team’s battle with Portland tonight. The Thunder are tied with the Pelicans for the 8th seed with two games remaining, but New Orleans holds the tie-breaker.

Nice bounceback here by Washington following Friday’s dud in Brooklyn. John Wall returned to the lineup last night with 24 points and 9 assists (and 10 turnovers), leading Washington to a fairly easy win over the Horford-Teague-Korver-Carroll-less Hawks.

New Orleans and Houston were knotted up entering the fourth last night, but the Rockets pulled away quickly in the final period and didn’t look back.

James Harden paced the team with 30 points and 7 assists in 38 minutes. He hit 9/9 free throws. Corey Brewer added a big 20 off the bench, and Dwight Howard double-doubled with 19 and 11.

Anthony Davis dropped in 27 for New Orleans, and Jrue Holiday scored 17 in just 15 reserve minutes. They’ll first need to sneak into the postseason, but the Pellies with a healthy Holiday would make for an awesome match against Golden State.

Phoenix got 23 from Gerald Green and 20 from Eric Bledsoe in the loss.

The Mavs’ offense clicked nicely last night, and Dallas was able to stay ahead of LA all game.

Jordan Clarkson led the Lakers with 26 points in 39 minutes. His numbers are obviously bloated playing for such a bad team, but his post-all-star stats (16, 5.5, 4.5) are undeniably sweet.