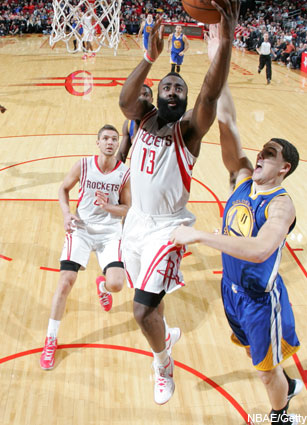 The Bobcats put an end to a two-game losing patch, sending the short-handed Sixers out of Charlotte empty handed. The ‘Cats came in dead last in the League in offensive rating, but managed to hit 46 percent from the field (six percent better than they shoot on average) and got off a 91 shots, thanks to the hectic pace the Sixers tend to force. Charlotte got two double-doubles: Al Jefferson with his sixth straight, going for 14 (on 6-21 shooting) and 12 boards, and Kemba Walker with 18 and 10 assists. Gerald Henderson chipped in another 18, and Jeff Taylor led the scoring with 20. The Bobcats are somehow just a game and a half out of third in the East.

Philly played without ace rookie Michael Carter-Williams, sitting out with a sore hamstring after his first career triple-double. Tony Wroten started in his place led the team with 21 points (10-22 shooting) and handed out 10 assists. Spencer Hawes put up 10 and 13, along with five assists.

After rallying from a 13-point halftime hole, the Wizards collapsed in the final minute of regulation and overtime. Up by five with 43 seconds to go, the Bucks nailed a jumper by Khris Middleton (career-high 29 points on 11-22 shooting) and a triple from Brandon Knight to tie it up at 102. Chris Singleton missed a potential game-winning three at the buzzer for Washington.

In OT, the Wiz shot 0-6 from the field managed just three points to let the Bucks escape with a victory.

Washington lost sharpshooter Martell Webster to a sprained ankle early in this one. John Wall scored 30 (9-23) and had eight assists for Washington, shooting 6-13 on the mid-range jumpers that are going to be crucial to his and the Wizards’ success. Some stellar transition defense doesn’t hurt, either.

Kyle Korver set the record for consecutive games with a made 3-pointer as the Hawks rolled to an easy win over Cleveland. Korver has now hit a triple in 90 consecutive games, breaking a record held by Dana Barros since 1996. The sharpshooter continues to hardly miss this season, going 4-6 from the field and 2-3 from deep. Al Horford did his usual thing, going for 22 on 10-19 shooting and pulling in nine rebounds.

Dion Waiters dropped a season-high 30 on 13-20 shooting for the Cavs, and Andrew Bynum put up his best effort of the year with 20 and 13, but that just seemed to make things worse for Cleveland. Kyrie Irving went scoreless (to repeat: SCORELESS), going 0-9 from the floor and 0-3 from the charity stripe. Even when some of this team’s mismatched parts get going, nothing works for Cleveland.

The Celtics jumped all over Denver from the opening tip, leading wire to wire for a surprise victory. Boston scored the first 14 points of the game and got their lead as high as 27 in the first half. Jordan Crawford, who first-year coach Brad Stevens has turned into an effective player this season, led the C’s with 22 points (9-13 shooting) and passed for eight assists. The Nugs were unable to slow down Kris Humphries in the pick-and-roll game, as the former Net scored 18 points on 8-11 shooting off the bench for Boston.

Things got a little interesting in the third quarter, as Ty Lawson (20-4-4) helped pull Denver within one before Boston pushed back. Unfortunately, Lawson left the game with a hamstring tweak. Here’s hoping the speedster is okay for the Nugs’ next game. New Nugget JJ Hickson pitched in 17 points and seven boards, and Nate Robinson led the bench charge with 11.

All it took was a trip to Brooklyn to get the Knicks back into form. For the second game in a row, New York knocked down its threes – 17-34 in this one – and Carmelo Anthony (20 points on 6-10 shooting, 11 boards, four assists) was less trigger-happy and more willing to move the ball around the arc, helping to increase efficiency and generate good looks for the Knicks. It was just the second time in Anthony’s career he scored 20 or more on 10 or fewer shot attempts.

Including Melo, six Knicks made it into double figures scoring the ball; JR Smith shot over 50 percent from the field (6-11, 5-9 on threes) for the first time in what feels like forever for his 17 points and Andrea Bargnani went for 17 and eight. Iman Shumpert, frequently rumored to be on the move, scored 10 and let some anger out on the rim with the nastiest dunk of the night:

After Orlando kept it close in the first half, the Knicks pulled away in the third and the game was effectively over by the time the fourth quarter started. The Magic, who played without center Nikola Vucevic, were led by Arron Afflalo’s 20 points, while rook Victor Oladipo put up 17 and nine boards. He also registered a nice early highlight in his career, stuffing Anthony on a dunk attempt.

Houston blasted the Warriors out of the building in a manner they previously hadn’t really shown they can: with defense. The Rockets shot just 6-28 from long range, where they usually thrive, but held Golden State to just 35.5 percent from the field. Usually shaky (to be kind) defending the perimeter, the Rockets held the Splash Bros. duo of Stephen Curry and Klay Thompson to a combined 7-24 shooting and 1-9 from three. Steph still managed 22 points thanks to 11-11 shooting from the free throw line, but he coughed the ball up eight times.

James Harden and Dwight Howard were every bit the dream pairing Daryl Morey imagined when he put them together; Harden dropped 34 points, also grabbing down seven boards and dishing four assists, while Dwight had 22 and 18, even hitting 12-20 free throws.

Kevin Durant (29 points, eight rebounds, five combined blocks/steals) and Russell Westbrook (25 points on 8-16 shooting, four assists, four steals) went to work against the Pelicans, and the Thunder have now taken 14 of the last 15 games in this matchup. New Orleans pulled ahead early, leading by double digits in the first quarter, but the Thunder took the lead by half and never let it get close.

Bad news for the Pellies came in the form of another injury, as Tyreke Evans (11 points) sprained his ankle and had to leave the game. Jrue Holiday had 16 and eight assists for NOLA, while Ryan Anderson had a rough shooting night on his way to 18.

Markieff Morris (25 points, 11 boards) was the hottest Sun on Friday, nailing his first 11 shots from the field to help lead Phoenix to a win over Toronto. The Suns held the lead the entire second half, going up 15 midway through the fourth. When the Raptors got within six, Eric Bledsoe (16 points, seven assists, two 3-pointers) drained a bomb from long range to ice the win.

Toronto has now dropped five in a row and have two more tough games ahead, Kobe’s return on Sunday and a date with Spurs following, before they might be able to snap their skid. Kyle Lowry led the Raptors with 21 points and seven assists, while Jonas Valanciunas posted a 11 and 10 for a double-double. Rudy Gay raised his field goal percentage with a 6-15 shooting performance on his way to 17 points.

Portland padded it’s margin of victory, embarrassing the Jazz with a barrage of threes. The Trail Blazers set a team record by netting 17 triples, shooting 73.9 percent from behind the arc. Wes Matthews, second in the league in effective field goal percentage and nailing 50.9 percent of his threes, kept shooting the lights out for Rip City. He hit 4-6 threes and 8-11 shots overall to lead the team with 24 points, while Damian Lillard went for 21 (5-6 on 3-pointers, 7-9 overall, six assists). LaMarcus Aldridge looks like an All-Star every time out this season, as he recorded a double-double with 20 points and 15 boards in just 29 minutes – the most played by any Portland starter. Alec Burks led Utah with 16 points, while rookie Trey Burke struggled to the tune of 3-9 shooting and just seven points.

In their last game before Kobe’s return, the Lakers rode tough defense and timely shooting to rally for a win in Sacramento. LA used an 11-0 run to take an 88-87 lead, going back and forth with the Kings for the next several minutes. Jodie Meeks (19 points, 7-11 shooting, 5-6 on threes) knocked down two 3-pointers separated by a jumper by Pau Gasol (19 points, seven boards) to reclaim a slim lead. The Kings turned the ball over on three consecutive possessions in the final 1:17 to seal their fate. On the whole, the Lakers forced 17 turnovers while giving it away just 12 times themselves.

Ben McLemore had his best game as a pro despite having one of those late turnovers, scoring a career-high 20 points and hitting 4-7 treys. DeMarcus Cousins matched him with 20 to go along with 11 boards, but Boogie turned the ball over a six times. Isaiah Thomas is getting an early campaign together for Sixth Man of the Year, going for 14 points, nine assists and four steals off the bench. One of his dimes to set up a McLemore three was extra pretty:

Without Kobe, the Lakers have been gritty, team-oriented and fun. Hopefully, Mamba will find a way to augment this enjoyable team, rather than try to impose his will.