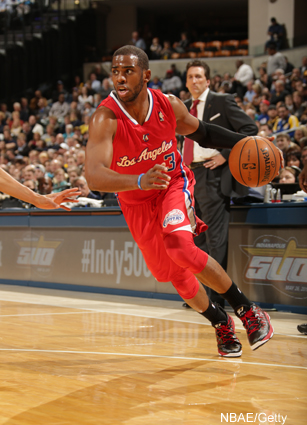 The Pacers were coming in to last night’s game hot, riding a five-game winning streak. But without Roy Hibbert in the lineup due to suspension, Indiana struggled and dropped a home loss to the Clippers. The Clippers had several chances to put the Pacers away but Nap Town kept coming back and wouldn’t go down without a fight. After a 13-0 third quarter run by LA, the Clippers cut the lead to seven early in the fourth. The Clippers then went on an 11-1 run while Indiana went ice cold from the floor, missing their next nine shots in a row to fall behind by 17. But, Paul George hit back-to-back 3-pointers to trigger a 13-0 run that cut the Clippers’ lead to four with 2:45 left. At that point, Chris Paul decided he had had enough and took the game over. First he hit an awkward jumper then followed that up with back-to-back buckets to push the lead to six as the Clippers held Indy without a basket over the final 2:14 to ice the game. Paul finished with 29 points, 8 assits and 6 boards, Jamal Crawford scored 23 on 9-16 shooting and Blake Griffin finished with 18 points and 14 boards. Paul George scored 20 points, dropped 5 dimes, grabbed 4 boards and had 2 steals.

Joakim Noah had arguably the best game of his career with 23 points, 21 boards and 11 blocks to lead the Bulls over the hopeless Sixers. Chicago led the entire second half and pushed their lead to as many as 16. The Sixers did make a run in the fourth, though, and cut the deficit to four points but Nate Robinson quickly ended the comeback with a 3-pointer that pushed the Chicago lead to nine. Carlos Boozer scored 21 points and grabbed 12 boards.

Kobe Bryant dropped 33, Antawn Jamison scored 17 and the Lakers continued their dominance over the Timberwolves with their 21st straight victory over Minnesota. The most incredible part of this win? The Lakers were actually laughing and enjoying each other’s company on the bench at the end of the game. Only took 60 games! Los Angeles has now won 12 of their last 17 and five of their last seven and now find themselves two games behind Houston for the eighth seed. Ricky Rubio led Minnesota with 13 points, 13 dimes and 8 boards.