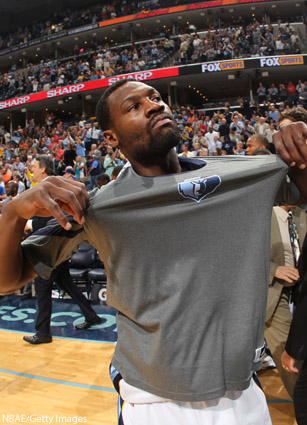 That’s all, folks. The 2011-2012 regular season is in the books, the Playoff matchups are set in stone, and thus ends my time as your morning sidekick. It’s a bittersweet moment—actually, it’s just bitter. I have no clue what I’m going to do with all my free time on weekday evenings from now on (taking suggestions). A few acknowledgements to pass along before we get to the final slate of games.

First of all, I can’t say a big enough Thank You to Ben, Ryne, Adam, Tzvi, Susan and everyone at SLAM for extending me the opportunity to be the voice of the world’s best basketball magazine every single morning. Like many of you, I grew up on SLAM Magazine, and the walls of the room I grew up in back in DC are plastered with classic covers. So to be a part of the team in such a big way’s been a blessing.

Second, a sincere and much-deserved thanks to Pete for handling weekends—a truly thankless job and a sacrifice that few will ever completely understand—and to Eldon for filling in when I needed a sub. I owe you both an adult beverage.

And lastly, to all the loyal readers and commenters—whether you’ve been with me all year, or just dropped by when you could, I appreciate you reading, reacting, critiquing and interacting. The Post Up would be nothing without you, so thank you.

It’s been a hell of a ride, with too many games crammed into too few nights. I can’t guarantee I’ll be back next year, but you’ll certainly see me around the site, in the mag, on Twitter and anywhere else basketball is being discussed. So do your boy a favor, and send some friendly ping-pong prayers my way.

And since this is my last chance to do whatever I want with a morning Post Up, I’ve taken the liberty of listing my favorite players from each of the NBA teams in action last night—that is, either the player I had the most fun watching, a guy I thought was interesting or funny this year, or just a fantastic surname. Essentially, each team’s “Post Up MVP.” Enjoy!

Toronto started the game on a 17-2 run, then ended the first half on a 15-0 run and never looked back, closing the book forever on the New Jersey version of the Nets. Former Net and virtual unknown Ben Uzoh had perhaps the most meaningless triple-double in NBA history—he finished with 12-11-12—while Solomon Alabi picked up his first career double-double (including 17 rebounds). In all, though, this was among the more forgettable games of the season, as each team was basically down to only a few healthy bodies, and not one Nets player shot better than 50 percent from the floor.

Philadelphia completed its mission to meet Chicago in the first round of the Playoffs by doing what they probably should have done a day earlier—taking the L. Ben Gordon helped out, by shooting 7-7 from three-point range in the second quarter alone (most ever in a single quarter without missing since the stat’s been kept) and scoring 26 points in all. The Pistons routed the Sixers, who once again rested the bulk of their key players to get ready for the postseason. In Ben Wallace’s farewell to the NBA, he scored 7 points, grabbed 12 boards and blocked a shot. Respect to Big Ben—who holds the record for most NBA games played as an undrafted player.

Paul Pierce scored 12 points, all in the first half, despite limping around with a sprained right toe, and Rajon Rondo dished out 15 dimes (but scored exactly zero points) as the Celtics handed the Bucks yet another late season loss. Poor Milwaukee fans—the Bucks limped to the finish line to end up 31-35 on the year after once being 28-28. Rookies Tobias Harris and Jon Leuer led Milwaukee with 17 and 15 points respectively, while Boston gave its key players a rest and still picked up the win.

6 in a row, baby! Those Miami Heat ain’t nothin’ man. Okay, just kidding—the Big Three didin’t play, and Miami’s already locked in to the No. 2 seed, but still, the Wizards handed the Heat their worst blowout loss of the 2011-12 season. Mo Evans scored a season-high 18 points, but it was Nene who dominated in his 18 minutes—he had 15 points and 7 rebounds—and John Wall played only 26 minutes but racked up 12 assists. The Wizards season-ending six-game streak included wins against Orlando, Chicago and Miami twice, though none of the superstars from those teams suited up. Oh, and an Eddy Curry sighting! Big Ed made his first start since 2008 and scored 10 points.

And there it is—we’ve officially witnessed the worst team in NBA history, at least by winning percentage: the 2011-12 Charlotte Bobcats, brought to you by Michael Jordan. Amar’e Stoudemire announced his return with 21 points in two quarters of action, JR Smith had 22 and Josh Harrelson shave his epic moustache and put up 18 points and 9 rebounds, as the Knicks dealt the Bobcats one last, merciful defeat. New York will now gear up for Game 1 of a first-round matchup with 2-seeded Miami on Saturday, while Charlotte will hit the links.

The Hawks clinched home-court advantage in the first round of the Playoffs after jumping out to a 23-point lead in the first quarter and cruising to a win over the defending Champions behind 23 points from Josh Smith. JSmoove added 9 rebounds and 7 assists and Atlanta shot 53 percent from the floor in what was never a close game, despite 22 points from Dirk Nowitzki. The Hawks have the fourth-best record in the East, and will host Boston in Game 1 on Sunday, while Dallas travels to Oklahoma City to open its series with the Thunder on Saturday.

John Lucas saved his best for last. After a season of filling in for Derrick Rose and CJ Watson, Lucas notched a career-high in points with 25, leading the Bulls to their last victory of the season—and an important one, since it helped Chicago clinch the No. 1 overall seed in the 2012 NBA Playoffs. The Bulls earned home court throughout the postseason behind Lucas’ big scoring night on 10-16 shooting, a 13×13 double-double from Joakim Noah and their typically tough defense. Cleveland shot 32 percent as a team, and last game’s leading scorer, D-League call-up DJ Kennedy, didn’t have a single point or assist.

By the second quarter, Memphis had a 26-point lead, and though the Magic cut the deficit to single-digits in the third quarter, they were never truly in the game. Marc Gasol got every big bucket for the Grizzlies in the second half to keep Orlando at bay, and finished with 22 points. Rudy Gay added 20, OJ Mayo had 15 and Zach Randolph put up 13 and 12 as the Grizz clinched the No. 4 seed out West. That’s 11 straight home game victories for Memphis—a franchise record. The Grizz open a first-round series with the Clippers at home on Sunday.

Dear Houston: too damn late. The Rockets won behind a season-high 27 points from Chase Budinger, but Houston has long since been eliminated from the Playoff picture. Rocks rook Marcus Morris hit the go-ahead 3-pointer in probably his biggest moment (and game) of the entire season—he finished his night with 7 points, 5 rebounds, a blocked shot and a steal. New Orleans blew a 17-point lead and were led in scoring by Jerome Dyson, while a guy that I’ve literally never heard of by the name of Darryl Watkins had 13 points and 10 boards. Who?

When you give up 131 points, and an absurd 80 of those points in the paint (more than a handful teams scored total last night), you ain’t winning that game. Minnesota learned that the hard way, as the Nuggets came to town and blew the Love-less Wolves out of the water on Brad Miller’s final night in an NBA uniform. (Miller finished with 4 points, 4 rebounds and 4 assists in just 17 minutes.) Javale McGee scored a team-high 19 points, Arron Afflalo had 18 and Danilo Gallinari had 17 for the Nuggs, who won their 4th straight and 8th in the last 10—they get the Lakers in round 1.

Apparently, Utah and Portland didn’t get the memo that Thursday night was meaningless. With the Blazers down 2 with 3 seconds to play, Wesley Matthews got a look at a three but missed it, then crumpled to the ground but didn’t get the call, giving Utah a 5-game winning streak heading into the Playoffs (word to Enes Kanter). Rookie Alec Burks had 18 points and Slam Dunk champion Jeremy Evans took advantage of some rare playing time by racking up 13 points, 10 rebounds and 3 blocks. Portland won’t be in the Playoffs for the first time since 2008—and we’re going to miss them.

Coming into Thursday night, Kobe Bryant needed a 38-point effort to wrestle the NBA scoring title from Kevin Durant’s clutches. So what did he do? Well, he…he sat out. To the chagrin of everyone, the Black Mamba elected to take the night off, as did Andrew Bynum and Pau Gasol. The lack of Laker big men opened the door for DeMarcus Cousins to go crazy inside, putting up 23 points and 19 rebounds—Jason Thompson got in on the fun too, with 17 points and 10 boards. The hometown fans in Sacramento gave the Kings a rousing ovation on their way out, but you can’t help wondering what the future holds for pro basketball in SacTown.

With the mainstays from each side either nailed to the bench of not even in the building, Patty Mills decided it was time to steal the spotlight. Mills put up career-highs in points (34) and assists (12) on a big 14-25 shooting night, leading the Spurs past the Warriors as both teams go in completely opposite directions. Golden State shot 52 percent and had 6 players score in double figures, but turned the ball over 16 times and allowed the Spurs to finish with a +12 rebounding margin.

Moment of the Night: Brad Miller drills the final 3-pointer of his NBA career, then gets a nice ovation in his last appearance of a 14-year NBA career. He gave a heartfelt post-game interview, too. And if you replace “NBA career” with “2012 Post Up writing,” he and I basically had the same emotions last night.

Dunk of the Night: Press 1 for Terrence Williams. Press 2 for JJ Hickson.

Tonight: Absolutely nothing. Take the night off to breathe before the Playoffs start on Saturday. Have a great postseason everyone, and for one last time—be easy.