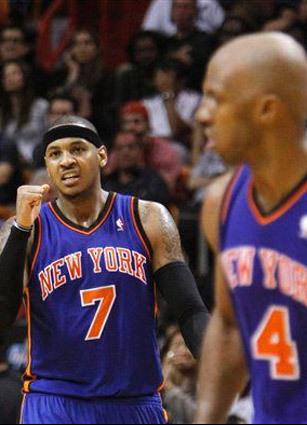 Nobody on the Lakers put up big numbers, but let’s talk clutch: Kobe Bryant (17 points) hit a fadeaway with just under a minute remaining (clutch); Pau Gasol (clutch) drew a charge on Russell Westbrook (not clutch) on the ensuing possession; then, after two missed free throws from Lamar Odom (not clutch), both Kevin Durant (not clutch) and James Harden (not clutch) missed open looks that would’ve tied things up with little-to-no time remaining. The point: in a close, back-and-forth dogfight, as is often the case, whomever came through in the clutch (OK, done with that word) was going to pull it out. This time, experience won out, but this’ll only add to the Thunder’s tally of big-game reps, and that, I imagine, is a good thing.

(But yeah, the Thunder do need to work on ball movement and halfcourt offense, specifically in the last few minutes of big games, when everything slows down and you need to grind out buckets. Neither Kendrick Perkins (out 2-3 weeks) nor Nazr Mohammed (day-to-day) was active, so the team’s dynamic will mostly change as those guys get worked in over the next month or so.)

They’re getting very little attention, but the Sixers are rolling these days, slowly trotting upwards in the East. With the Knicks win (more on that in a sec), the Sixers stayed within one game of NYK, sitting at seventh with a 30-29 record. The Cavs threatened late, pulling to within three with only 48 ticks remaining, but a JJ Hickson (22 points, 16 boards) turnover ended Cleveland’s chances of sneaking away with a W.

After screwing up and committing a foul that allowed the Pacers to tie it up with some free throws, Channing Frye made up for it, hitting a J as the OT buzzer sounded that’ll earn him a spot on the next incarnation of this list. Indiana had previously outscored Phoenix 27-17 in the final quarter to force overtime, but couldn’t come through when it matter to snatch the victory. Meanwhile,it turns out Grant Hill is still thoroughly opposed to aging, as he put up 34 points and grabbed 9 boards. Must be nice.

Kevin Love doesn’t seem to be a big fan of all the losing the Wolves have been doing, so he decided to change that. Extending his double-double streak to 46 with a 37 and 23 performance, Love led Minny past a struggling Golden State squad. The Warriors had a chance to get the win, but Monta Ellis‘ game-winning attempt was swatted by the taller Wesley Johnson, and the TWolves hung on to end their seven-game losing streak.

The Magic just have the Bobcats’ number, it appears. Orlando took down Charlotte easily at home, defeating the Cats for the 12th time in 14 meetings behind Dwight Howard’s 20 points and 10 boards. Stephen Jackson (35 points) did his best to keep his squad competitive, but got little assistance. Well, no assistance, to be honest. The loss pushes the Bobcats out of the top eight in the East; they now sit at ninth, a half-game behind Indiana.

The Raptors came out hot, going up by as many as 19 in the first, but once the Mavs got going—you know. Dirk Nowitzki dropped 31 and Shawn Marion put in 20, as Dallas cruised by Toronto and picked up its sixth straight win. Amir Johnson notched a solid 21-point effort in the loss.

Chris Paul (6 points, 2-12 from field) had an off night, and the Hornets still almost came away with a victory, but Willie Green’s game-tying attempt with under 10 seconds left rimmed out. Kevin Martin put on an efficiency clinic, scoring 33 on 8-15 from the floor and 13-13 from the line, while Kyle Lowry put in 18. The W is the fourth straight for the Rockets, who still stand a few games out of Playoff contention in the West.

The good news, of course, is that the Spurs overcame the Grizz to up their record to 49-10, and that Manu Ginobili went completely off, scoring 18 in the fourth quarter (35 total) to lead San Antonio to victory. The bad: Both Tim Duncan and Tony Parker went down with injuries at some point, and though Duncan returned, Parker did not. So as great as the Spurs have been, it might be time for that rest-y period where the vets chill and begin preparing for postseason play. This contest was close late, but an 8-0 run, which included a Ginobili go-ahead layup, seal things up.

Wow. So, this happened. The Heat had a slight advantage for the game’s majority, but some tough D down the stretch (which wasn’t the case for, um, the entire 48) along with some really, really clutch (yeah, had to bring it back) play from Chauncey Billups propelled the Knicks over Miami late in the fourth. Things were pretty sloppy (the Knicks and Heat shot 38.8 and 43.2 percent from the field, respectively), and I’ll hesitantly say the competition loosely mirrored the late-90s Miami-NY action. Carmelo Anthony dropped 29, while the Miami triumvirate combined for 59, which is way lower than it’ll need to be in the future. And, if you ask me, it seems the Knicks made a great trade last week, maybe because of the Melo addition, but definitely because of the dude that’ll be running point for the next season and a half. In only his third game with the team, Billups demonstrated smarts, fearlessness, and playmaking ability—in other words, Billups was essentially what Ray Felton has been this season, but better. Miami hosts the Magic Thursday, but not before the Knicks take a turn in Orlando tomorrow night.

Jamal Crawford and Joe Johnson combined for 55, as the Hawks went up big in the second/third and then held on late to defeat the surging Blazers. With the Knicks looking pretty damn great last night, and the rest of the East beefing up by adding experience and talent every day, the Hawks will need to improve if they plan to keep pace—so this win over a Western contender was definitely a good look. Oh, and props to Zaza Pachulia, who thoroughly embraced his enforcer role by scoring only 2 points while grabbing 12 boards.