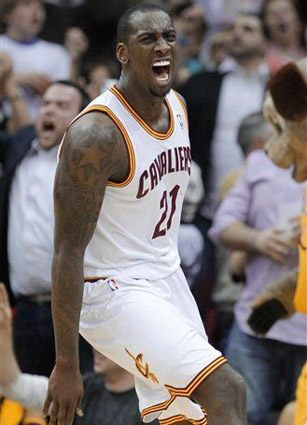 It didn’t exactly make up for The Decision, but for the time being, Cleveland fans have something to rejoice over. With an absolutely rocking Q Arena carrying them all game, the Cavs held onto an 11-point halftime lead and surprisingly bested the Heat, despite LeBron James‘ 27-10-12 triple-double. During the stretch, Baron Davis (10 points) placed his squad (and the whole building, for that matter) on his back, putting in some huge buckets and finding JJ Hickson (21 points, 12 boards) for an open dunk in the final minutes, capitalizing on a crucial possession. The whole scene—led by Dan Gilbert’s smiling face, front and center—was just absurd, but the Cavs certainly earned it, shooting 55.6 percent from the field and coming through when it mattered most. Mike Bibby (23 points) played well, but Chris Bosh’s 10-point, 4-board disappearing act just isn’t going to work. The Heat are now off to Washington, while the Cavs—well, no reason to look toward the future. Cleveland can just enjoy this one for a few days. Or longer.

Houston pulled within two games of Playoff contention last night, routing the Nets in Jersey. Kevin Martin led ’em with 20, enforcer Chuck Hayes scored 8 and pulled down 14, and Kyle Lowry put up a solid 16-7-10 line. The Rockets will now head to Philly, where they’ll look to continue their mini-run and inch closer to that eighth spot.

After the Warriors made a miraculous six-second (or so), six-point comeback in the final ticks of regulation, Kevin Durant (39 points) took over, scoring 8 of his team’s 9 OT points and leading OKC to the win. Monta Ellis (20 points, 11 dimes)—who hit the shot that sent the tilt to extra time in the first place—had a chance at a game-winning J, but it rimmed out. The W was the Thunder’s fourth straight.

Despite all the off-the-court drama, Marcus Thornton and the Kings focused up long enough to take down the Suns in an arena they probably won’t be playing in for much longer. Thornton scored a game-high 24 and grabbed a personal career-high 11 boards, while DeMarcus Cousins put in 17 and dished out 8 assists (!). The Suns are now four and a half games out of postseason positioning, having watched their chances of playing into May all but fade these past few weeks.

Last Call: This shot was initially waived off, but eventually counted. You see, the clock hadn’t stopped after Christian Eyenga’s three and it appeared the ball left Bron’s hands too late. But it was eventually fixed, and yeah: Nice shot, dude.