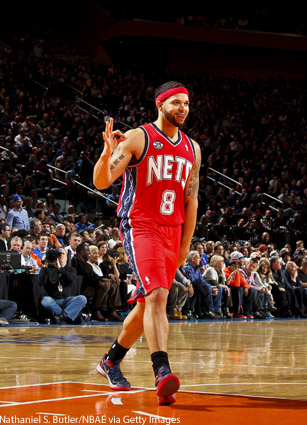 Another big night of NBA action, highlighted by returns from Melo and the MVP. Leggo!

Looks like Derrick Rose’s back is okay. The MVP helped the Bulls jump all over the Hawks (Chicago led 35-17 after one quarter) and cruise to 26-8 on the year—most wins in the NBA. DRose racked up 23 points, 6 assists and 5 rebounds and looked like vintage Rose for most of the afternoon. The Bulls led by as many as 21 until a Hawks run cut Chicago’s lead to 5 in the fourth quarter. But Luol Deng (10 points, 8 boards, 4 dimes) hit a back-breaking 3-pointer with three minutes left in the game and the shot clock about to expire to put the Bulls up 88-79. Atlanta was outrebounded 50-41 and missed 11 free throws, and had to go without Joe Johnson down the stretch, who sat down for the night with a knee injury after providing just 12 points on 5-11 shooting, including 0-3 from three-point range. Josh Smith put up 17, 12 and 5, but he didn’t shoot well either (7-21) and the Hawks were led in scoring by—drum roll—Jannero Pargo, who finished with 19 points, mostly in garbage time.

Think New Jersey had this one circled on the schedule? With their local rivals getting all the pub recently due to Linsanity (which began against them), the Nets came in on a mission—to beat the crap out of the Knicks, with Carmelo Anthony and Baron Davis back in the fold for the first time. And behind a season-best 38-point performance from Deron Williams (dude hit 8 threes), the Nets ruined Melo’s return to the lineup, and gave New York just its second L of the Jeremy Lin era. Melo had 11 points (4-11 shooting) and 6 assists, while JLin finished with 21 points, 7 rebounds, 9 dimes and 4 steals—actually, all 5 Knicks starters scored in double figures—but perhaps the most telling stat was that Lin shot the ball 18 times, as opposed to Anthony’s 11 (and 17 chucks for Amar’e Stoudemire, who had 17 points). The Nets won despite having more team turnovers, shooting a worse percentage from the field and having DWill foul out of the game with 3+ minutes left. Williams was sensational, especially in the third quarter, when he scored 18 points, including 12 straight at one point. If New Jersey (10-24) was tired on the third night of a back-to-back-to-back, it didn’t show, as they made things tough on the Knicks all night. New York dropped back below .500 at 16-17.

Ryan Anderson hit a 3-pointer with 18.1 seconds left to give the Magic a 91-90 lead, and held off the Bucks for the win—the third time Orlando’s beaten Milwaukee in the past 10 days. Anderson only score 9 points but had 11 rebounds, and Dwight Howard poured in 28 points and 16 boards, plus 4 assists and 3 steals (but 7 turnovers). Brandon Jennings led the Bucks with 22 points, and Ersan Ilyasova finished with 15 points and 15 boards one night after going crazy against the Nets, but Milwaukee shot 23 percent from the three-point line and couldn’t hold on to a 90-88 lead with under a minute left. In every single Orlando win over the Bucks over the past two weeks, the Magic have overcome fourth quarter deficits, and they now sit at 21-12 on the year, with a potentially awkward matchup at New Jersey up next.

Coming in, the Grizzlies had lost 10 in a row in Houston. Add 1 to that streak after Houston shot a season-high 67 percent from the floor in the first half and Kyle Lowry directed the Rockets to their 19th win of the season with 24 points, 9 assists and 7 rebounds. Heading into the fourth quarter, the game was tied at 76, but Houston opened the period on a 10-0 run to take a commanding lead, and while Memphis made things interesting down the stretch—they got to within 2 points with under 30 seconds left—superb free throw shooting from the Rockets assured the home team the W. The Memphis loss snapped a 4-game winning streak for the Grizz, who are now 18-15 on the season. Rudy Gay was the team’s leading scorer with 23 points, while Marc Gasol provided a nice all-around game with 7 rebounds and 5 dimes, but only scored 11 points.

The Champs had no issues blowing past the shorthanded Celtics, and the Mavs have now won 7 of their last 8 games, while Boston’s dopped 4 in a row, including two of those to the Detroit Pistons. Already without Kevin Garnett, Rajon Rondo and Brandon Bass, the Celtics lost Jermaine O’Neal and Chris Wilcox in the third quarter with injuries—both of whom started the game, only combining for two points and 4 rebounds. Paul Pierce had 20 points and Ray Allen added 15, but the Celtics couldn’t find much offense beyond those two, and Pierce had 5 of the team’s 17 turnovers. On the other side of the ball, Dirk Nowitzki passed Robert Parish for 20th on the all-time scoring list at 23,354 after a 26-point night (plus 16 boards) and Jason Kidd passed Michael Jordan for 2nd all-time in steals. Dirk is also now just the third player with 1,000 career blocked shots and 1,000 career three-pointers made, joining the rarified air of Rasheed Wallace and Clifford Robinson. The Mavericks are now 21-12 and coming on strong, with the Lakers coming to Dallas on Wednesday.

No letdown for OKC. One night after KD and Russ went crazy, they returned with another spectacular effort to get the Thunder to 25-7. This time, the pair scored 31 points apiece, as Oklahoma City cruised despite being without two big bench pieces in James Harden and Nick Collison, both nursing injuries. New Orleans made a late run to cut OKC’s lead to just 6 with a little over a minute to play, but it was too little too late, as the Hornets fall to 7-24 on the year. Jarrett Jack led New Orleans with 18 points off the bench, but as a team, the Hornets shot just 36 percent and trailed by as many as 26 points. This game was over by halftime—in the first half, the Thunder shot 55 percent and scored 60 points to take a 22-point lead into the break.

Already without Nene and Rudy Fernandez, the Nuggets lost Ty Lawson to an ankle injury 16 minutes in, and Andre Miller to an ejection late in the third quarter (for arguing an offensive foul call). That meant extended minutes for rookies Kenneth Faried (10 points, 14 boards) and Julyan Stone, who joined Arron Afflalo, Al Harrington and Corey Brewer as Denver’s crunch time lineup. Harrington (31 points) tied the game at 93 on a corner 3-pointer with 1:39 to play, and after a pair of poor possessions from the Wolves, Afflalo’s buzzer-beating wing jumper over Luke Ridnour fell short, sending this thing to overtime. In the extra period, neither team scored (shooting a combined 0-13) until Harrington hit a baseline fadeaway with 1:52 to go. The teams traded buckets, but with the Wolves trailing by a deuce, Luke Ridnour missed a wide-open layup off a beautiful inbounds play, and then Martell Webster compounded the bad/dumb Minny plays with one of his own—after stealing an inbounds pass with the Wolves down 3, he elected to dribble in for a dunk with less than 2 seconds left, rather than shoot the three. Not smart, Martell. It wasn’t pretty, but the Nuggs will take it, improving to 18-15.

The Spurs are the proud owner’s of the NBA’s longest winning streak this season, after outlasting the Jazz for their 11th straight victory (23-9 overall). Tony Parker scored 23 points and dished out 11 assists, Tim Duncan and Matt Bonner each scored 20, and Richard Jefferson hit a three-pointer with 6.5 seconds left to seal San Antonio’s win. Utah blew a double-digit lead and lost despite winning the rebounding battle, outscoring the Spurs on the break and shooting 48 percent from the field. Al Jefferson racked up 20 points and Paul Millsap had 16—each grabbed 11 rebounds—but San Antonio was just too much down the stretch, never letting the Jazz take the lead. And RJeff, much maligned at times this year, drilled one of the game’s biggest buckets after not scoring for the first 44 minutes of the game. During the League-best winning streak, Parker is averaging 23.7 points per game.

I’ll be honest, I didn’t watch this game. Not one second. And I don’t regret it. With so many other entertaining games going on, watching my Wizards suffer another blowout loss at the hands of a middling team like the Suns sounded painful. By all accounts, it was. Washington held a one-point lead in the third quarter, but it lasted only a split second. What followed was a 31-6 run by the Suns that put the game away. Phoenix took a 24-point lead into the fourth quarter. Wiz coach Randy Wittman called that stretch “the most selfish basketball I’ve seen since I’ve taken over” and it’s hard to disagree. Marcin Gortat scored 20 points (his third straight game with 20+) and Steve Nash racked up 12 points, 11 assists and 7 rebounds in only three quarters of action as Phoenix improved to 14-19. The Wizards made just 5 of 20 three-point attempts and were led in scoring by Jordan Crawford’s 20 points off the bench. John Wall shot 4-11 (10 points), Nick Young shot 3-13 (6 points) and Rashard Lewis shot 1-6 (3 points). It was the Suns’ 10th straight win over Washington.

Beating the Lakers is never easy. It’s damn near impossible when you score 7 points in the first quarter. Yes, the Blazers could muster just 7 points in the opening quarter, a new franchise low (duh). Before long, it was 37-7 Lakers, and while Nicoas Batum did his best to bring the Blazers back—18 points, 6 rebounds, 5 assists and 2 steals—it was all Los Angeles in this one. The Lake Show improved to 19-13, as Kobe Bryant dropped 28 points and the two big boys up front both went off for double-doubles: Pau Gasol had 16 and 12, while Andrew Bynum grabbed 19 rebounds to go with 14 points. Portland got hot in the third quarter, erupting for 36 points, and the Blazers (17-16) eventually cut the deficit to 10, but in the end, the Laker lead was just too much to overcome. L.A. outrebounded Portland 51-37, and got 17 off the bench from Steve Blake, who hit 5 threes.

Chris Paul has played the role of closer so many times this season. Last night was not one of those times. The Warriors snapped a three-game losing streak after holding CP3 scoreless in the fourth quarter and coming back from a 97-95 deficit in the final minutes to finish the game on a 9-0 run. Golden State moved to 12-17 on the year by coming up big in the clutch—Monta Ellis’ 32-point night didn’t hurt either. David Lee chipped in 24 points and 13 boards, Ekpe Udoh had 18 and 9 as GSW’s starting center, and the Warriors made the Clippers (19-11) look silly in the game’s waning moments. Lob Angeles got a silly 24-5-6 line from Paul and 22 points from Mo Williams, but down the stretch the Clips looked frantic, unorganized and sloppy. Oh, and Blake Griffin’s lefty dunk requires your attention (2 of his 21 for the night).

Moment of the Night: A couple of cool Mavs records—first Dirk gets to No. 20 on the all-time scoring list, then JKidd passes MJ for No. 2 in history in steals. Oh, and the Champs destroyed the Celtics in the process.

Dunk of the Night: Stoudemire on Shelden Williams. One of the few nice Knick moments from last night.

Tonight: Five games on deck, highlighted by Sixers-Grizzlies and an NBATV doubleheader: Kings at Heat, followed by San Antonio at Portland. Meet back tomorrow morning?