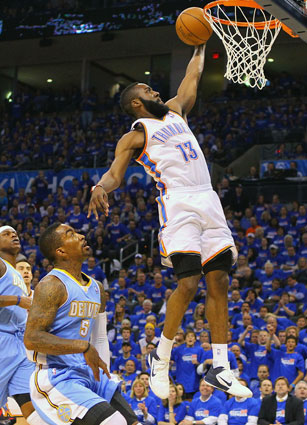 Great signs for Oklahoma City in this one. In Game 1, Thunder players not named Durant or Westbrook combined for 36 points; in Game 2, they had 39 by the half and 62 overall.

And Durant and Westbrook hardly provided anything that resembled an epic performance, something required just to win in the opener, instead the Thunder exchanged it for depth and team balance as five players scored in double-figures (including a promising 18 on just nine shots from James Harden).

There just wasn’t enough for Denver to compete: A sluggish start, no rebounding (minus 23), and absolutely nothing from the imported Knicks save for Ray Felton, who had 16. They’re going home, but going home in a hole.

Don’t expect a rarely-content team like the Thunder to rest on their laurels, especially against a Nuggets team that grows an extra leg at home. Until Oklahoma City wins in Denver, don’t rule out a long and competitive series. —Todd Spehr

In the most boring game of the history of basketball, the Lakers won 87-78. You probably fell asleep, but that’s fine, because so did Kobe Bryant and Pau Gasol. Kobe dropped 11. Pau had 8. Ron Artest looked like the most capable wing scorer on the floor tonight, which is hilarious. It was a totally disgusting, awful mess for every team, including the Lakers.

But it didn’t matter. Because the Lakers are the most talented team in the Western Conference. That’s just how it is.

They sneeze out baskets. Phil Jackson is so put-together that he got nine players who were under a deep, deep trance to beat a team that made the NBA Playoffs. He is who to call when the robots become autonomous, start feeling feelings, start moving in on us. He’ll talk them all down.

He got eight grown men to think this: “When Kobe is off, then we get to play basketball as a team! Hooray!” Really. They’re all saying, “Hooray!” afterward, like second graders, and no one is upset. They all believe in this. That’s how they’ve won two straight NBA championships.

Someone asked Phil Jackson what he thought about the game. He said this: “We won by 9 points, maybe 11. That’s about it.”

He didn’t even know the score. He just knows that the Lakers are better.

The Hornets have no answer and they’re starting to realize that. The Lakers successfully defended Chris Paul tonight by focusing the entire team’s attention on him. This worked because there are no other Hornets. Chris Paul is the only Hornet and that works for exactly one game in a seven-game series.

“Who knows what they’ll throw at us the next game,” Phil Jackson half-asked after the game. Of course he doesn’t. He doesn’t know what their game plan will be; he just knows his will be better. —Ben Collins

You knew he was going to play, right? Hyperextended elbow or not, there was no way Manu Ginobili was going to miss Game 2 in San Antonio. Not when the Grizzlies embarrassed his ‘mates like they did on Sunday, 101-98.

It wasn’t prime Manu we saw on Wednesday. Yet he scored 17 points and grabbed enough steals (4) to open up San Antonio’s transition game and lead the way to a much-needed 6-point win.

Playoff Tim Duncan, not to be confused with Regular-Season Tim Duncan, finished with 16 points and 10 rebounds, proving once again the fountain of youth is nothing but a mental construction. Dominic Cobb.

He’s so consistent your aunt’s mashed potatoes get jealous.

On the defensive side, the Spurs held “The $71 Million Man,” Zach Randolph, to 11 points, by far his worst production against San Antonio this season. Z-Bo was in foul trouble most of the game, clearing the way for unsung hero Sam Young, who scored 17 points on 7-13 shooting and hit a key three down the stretch.

Memphis’ starters all played well, but Shane Battier and OJ Mayo were terrible off the bench (1-7 and 2-11, respectively).

If not for the Grizzlies’ egregious three-point shooting (3-14 from beyond the arc), they likely would have won the game. Then again, outside shooting is San Antonio’s Mortal Kombat move. Richard Jefferson. Finish him. (Hernan Sanchez voice.)

The Spurs are going to have a hard time taking both games in Memphis (the Grizzlies are good there). Still, I see them breaking even and eventually winning in seven games. Somewhere Kevin Durant and the Thunder are licking their lips.