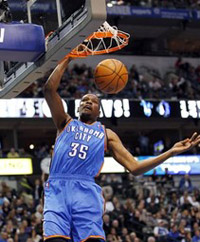 Oh, two-game nights. How easy you make Thursday Post Ups. The thing about two-game nights is that it’s impossible to mail them in. I mean, look: By writing this intro, I’ve already exceeded expectations. (See what I’m doing here? Slick, right?) Yup, just a pair of decent contests to take us into the weekend. Here’s how it all went down.

As harmful as the Caron Butler injury may (or may not) potentially prove itself to be, at the moment, we have no idea how it’ll affect Dallas’ season. This we do know: Without Dirk Nowitzki, the Mavs are simply not the Mavs. And the Thunder took advantage, rallying behind Kevin Durant (28 points) and Russell Westbrook (15 points, 9 dimes) en route to the victory. Naturally, we’d all love to read deeply into this one—Maybe the Thunder are really improving!, The Mavs are screwed!, etc.—but really, let’s just take it for what it was: one hungry squad in need of a W taking down a shorthanded and injury-depleted opponent. Here’s to hoping Dirk can return by tomorrow night, when the Mavs host the fiery hot Orlando Magic.

Tyreke Evans hasn’t lived up to post-ROY expectations thus far, but it’s good to see he’s still got plenty to offer, despite rumors of impending foot surgery and off-the-court family issues. Evans dropped 27 points and dished 12 assists, as the Kings brought their A game (or rather, their A++++ game) for a rare nationally-televised contest and took down the unsuspecting Nuggets. Carmelo Anthony scored 26 for Denver, who actually shot 50.7 percent from the field, but they struggled on the defensive end and allowed 122 points off 56.4 percent shooting. The Nugs will look to rebound Sunday when they host the Hornets.

Moment of the Night: Like many others, I was skeptical when I heard Serge Ibaka was selected for the Slam Dunk Contest. But these two plays slightly eased that tension…