Dwyane Wade caps off a Heat comeback, OKC outlasts Utah in OT, B-Knight catches fire from the outside and more Sunday action. 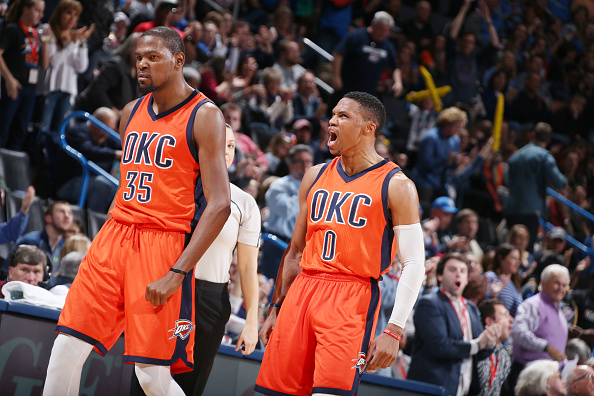 Brandon Knight was en fuego in Phoenix on Sunday. One game after scoring just 1 single point, BK rained a career-high 7 threes and finished with 25 points, 6 assists and 4 steals against the Wolves. Eric Bledsoe chipped in 23 points and 9 dimes, and as a team, the Suns scored 43 points off 25 Minnesota turnovers. The matinee of the day tipped early so that European fans could tune in during primetime overseas. Oh, and this happened:

The Heat trailed by 16 at one point, and were even down by six with just 1:31 remaining. But Miami outscored Memphis 11-0 in the last 2:34 of the game, finally taking the lead on a crunch time Dwyane Wade (14 points) jumper and hanging on to ruin Mario Chalmers’ return to South Beach (kidding, kind of). How crazy has the Eastern Conference been so far this season? Over the past week alone, Miami found itself in first, second, third, sixth and seventh place.

Midway through the first quarter the Sixers were actually leading this game, 16-8. But once the Raps woke up, this one was over. DeMar DeRozan led all scorers with 25 points, and Toronto has quietly won four straight games. Philly has not so quietly lost 24 of 25. Jahlil Okafor had 23 and 14, but beyond that there just wasn’t much going on for the Sixers. 76 points? Yikes.

The Thunder trailed by 13 at halftime, then outscored the Jazz by 19 the rest of the way. Serge Ibaka drilled a corner 3 with under a minute to play to tie the game, and then OKC scored 8 straight points to open the overtime period, punctuated by Ibaka’s sixth blocked shot—swatting away a Gordon Hayward (22 points) dunk attempt. In fact, the Jazz didn’t score in OT until Hayward got a transition bucket with less than 10 seconds remaining. By then it was already Game, blouses. Kevin Durant put up 31 points, 5 rebounds and 6 dimes while Russell Westbrook (25, 11, 5) did this: