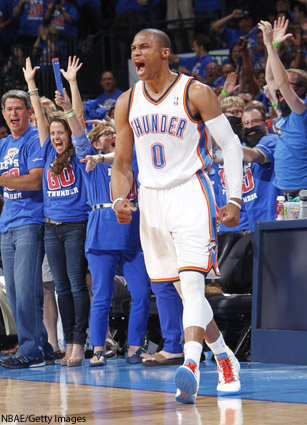 “Grinding is what got me to this point, and that’s what I’m going to continue to do.” —Brandon Bass

In the first half of a pivotal Game 5, with control of the series up for grabs, the Philadelphia 76ers unleashed themselves in Boston hell-bent on winning and taking this thing back to Philly up 3-2. The Sixers shot 54.8 percent in the first two quarters (23-42), held tight for a 50-47 halftime lead, and extended their lead to six early in the third quarter.

What the Sixers didn’t realize, though, was that while “hanging in there” may have been sufficient for them, the close game did nothing but infuriate the Celtics. Philly’s strong play gradually irked Boston, eventually igniting an inextinguishable blaze of fury.

With 7:41 remaining in the third quarter and the Sixers up 57-53, referee Rodney Mott lit the match.

Kevin Garnett (20 points, 6 rebounds) received a pass on the left block, sized up Spencer Hawes, attacked the rim and rose up in hopes of a layup, dunk or trip to the charity stripe. Instead, Mott called KG for an offensive foul. Garnett laid stale-faced on the floor, and the TD Garden instantaneously erupted in disapproval. Right then and there, Boston reached its boiling point.

Paced by unlikely hero Brandon Bass, the Celtics completed a 10-0 run within three minutes and gained a 63-57 advantage, a lead they would not relinquish for the rest of the night. The 10-0 run featured six points—including back-to-back dunks—from Bass, as he was unstoppable in the third quarter, scoring 18 points on 6-7 shooting, individually outscoring the entire Sixers team, 18-16. Boston closed out the third with a 10-2 run over the final 3 minutes and outscored Philly 28-16 in the period to take a 75-66 lead heading to the fourth.

At that point, even if Philly didn’t know it yet, the contest was in the bag. The Celtics scored 16 of the first 22 points in the fourth quarter to pad the lead and put the game away.

Bass finished with 27 points on 9-13 shooting, including five dunks, all of which were thunderous, crowd-pleasing and momentum-gaining. With every Bass bucket, the nail went one inch deeper in the coffin. After playing just 3 seconds in the fourth quarter of Game 4, Bass was on the court for 37 minutes in Game 5, and boy, did his presence pay dividends. With his monster Game 5 performance, Bass is now averaging 21 points in his last two games, with the Celtics outscoring the 76ers by 19 points while he’s on the court.

The game ball goes to Bass, no question. But it would be a travesty to not mention Rajon Rondo, who once again had his hand(s) all over the game. Rondo registered 13 points and 14 assists, including zero second-half turnovers and seven fourth-quarter points. He catalyzed the Celtics second-half run, and per the usual, created lanes and open spaces, and delivered on-the-money passes so guys like Bass, Garnett and Greg Stiemsma (who scored an inspiring 10 points on 5-5 shooting) could go to work. Paul Pierce was solid too, scoring 16 points (9-9 free throws), and holding the team together during a first half in which the Celtics seemed out of sync and in a funk.

For the Sixers, Elton Brand finished with a team-high 19 points, and Evan Turner scored 11 points and grabbed 10 rebounds, while Andre Iguodala had a pedestrian 8 points and 6 rebounds. No bueno, Andre. Rookie Lavoy Allen did his part on offense, scoring 12 points on 6-6 shooting, but it’s games like these—getting schooled by the likes of KG and Bass—that will ultimately help develop him into a solid, if not great, player in the League.

If the Sixers want to return to Boston for a Game 7—which Elton Brand reportedly guaranteed after the game—they will have to contain the Big 4, and certainly prevent another dunkfest from Bass. Game 5 continued a trend of resiliency this postseason for the Celtics, as they’re a perfect 4-0 this season in games following a loss. But the same applies for Philly, as it is also 4-0 following a loss. So, Game 6 is Wednesday night, and if the Celtics remain fickle with their play, we’ll be back in Boston on Saturday.

After the game, when asked what the feeling is like when the crowd at TD Garden gets into it, Garnett had this to say: “It’s like taking a cold shower, stepping into a freezer that’s 60 below. I wouldn’t recommend it, but if you want the feeling, try it out, come back, let me know.”

(I think) I feel you, KG. Can Philly defrost quickly enough to regroup and force Game 7, or will they remain frozen and call it a season? We’ll find out soon. —Eldon Khorshidi (@eldonadam)

Russell Westbrook jumped the passing lane and stole the ball from Ramon Sessions, sprinting down court and throwing up a ridiculous underhanded shot from the free throw line that banked in as Sessions grabbed him to avoid an easy bucket, walking into a three-point play instead. Westbrook and the OKC crowd went into a frenzy, giving the Thunder an incredible spark that led to an eventual 23-7 run. The game was tied at 70 prior to the remarkable effort from Westrbook, proving to be a game changer in OKC’s close-out victory over LA. “Sessions grabbed me kind of early and I just tried to throw it to the rim and luckily it went it,” Westbrook said.

Up 83-77 to start the fourth quarter and with Kobe Bryant taking a breather on the bench, the Thunder continued their relentless attack, highlighted by back-to-back 25-foot three-point baskets from Kevin Durant, essentially putting the game out of reach at 91-77. By the time Bryant checked back in, the Lakers had hit their fourth-quarter fatigue just as they had in Games 2, 3 and 4, wilting late while the Thunder continued to rise up, ultimately falling 106-90.

Bryant finished with 42 points (18-33) and 5 rebounds but did not record an assist. Dressed casual in grey sweats at his post game press conference, Bryant said the two teams have changed quite a bit since they faced each other last in the Playoffs. “When we came in here a couple years ago we had played with each other in the same system for years, so we kind of knew the intricacies of our offense and defensively what we want to do,” Bryant explained. “So now it’s just flipped. They’ve been together for a long time in the same system and know exaclty what they want to do—they’ve really grown tremendously. I think Westbrook improved, Durant improved. Sefolosha didn’t shoot the ball well tonight but overall he’s an excellent shooter which was different when we played them in ’09. Ibaka can shoot, Perkins is a great addition, so they made great strides.”

OKC did a fantastic job neutralizing the Lakers bigs in Game 5, with wonderful performances from Perkins, Ibaka and Nick Collison. Pau Gasol had 14 points, 16 rebounds and 3 blocks but only converted five field goals on 14 attempts. Andrew Bynum was disappointing, adding 10 points on 4-10 shooting and 4 rebounds. Perkins had 11 rebounds and two blocks and Collison added 6 boards. “They did the things that don’t show up in the stats and led us to a series win,” Durant said of the Thunder post players.

The Thunder’s Big 3 of Westbrook (28), Durant (25) and Harden (17) combined for 70 points. “That’s a tough team, they weren’t laying down,” Westbrook said of L.A. “We had to come together and be better teammates and we did that from the end of the third quarter until the end of the game.”

After being critical of Gasol’s play following Game 4, Bryant was more diplomatic in his comments following Game 5, saying Gasol played aggressive and took the shots that were available to him.

The win for OKC advances them to the Western Conference Finals for the second straight year. This time around they will have to matchup against a San Antonio Spurs squad that hasn’t lost a game since April 11. —Nima Zarrabi (@NZbeFree)