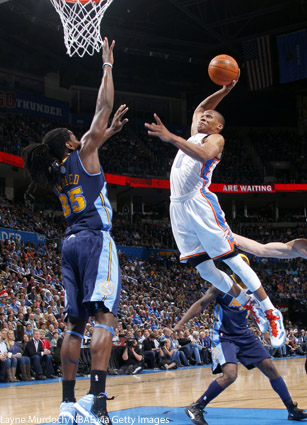 Fantastic finishes, historic performances, this is why we love the NBA—unless you’re a Bobcats fan. 10 games to get to, and it all starts in the Big Apple, with more Linning.

Linsanity is here to stay. Jeremy Lin—who Jason Kidd compared to Steve Nash post-game—delivered 28 points, a career-high 14 assists (7 turnovers) and 5 steals as the Knicks carved up Dallas’ defense in the fourth quarter to improve to .500 at 16-16. The Mavericks six-game winning streak came to an end, as New York outscored Dallas 32-22 in the fourth quarter thanks to Lin’s late theatrics and an amazing shooting display from Steve Novak, who scored all 14 of his points (including 4 threes) in the final period. Tyson Chandler chipped in 14 points, 10 boards and 3 blocks and newcomer JR Smith celebrated his return to the NBA with 15 points (3 threes) in 30 minutes, and one curious haircut. Whatever coach Mike D’Antoni’s reasoning for playing JR so much despite not yet practicing with the team, his eccentricity only added to the Linsanity. The Knicks came back from a 12-point deficit and survived a 34-point outburst from Dirk Nowitzki.

Miami won its sixth straight game—all by double-digits—behind 27 points from Dwyane Wade and a classic 25/11/8 line from LeBron James. The Heat led by as many as 20, and shot 48 percent from the field en route to earning their league-best 25th win of the season. A heck of a way to celebrate Mike Miller’s 32nd birthday, huh! Oh, and President Clinton was in the house. Orlando, meanwhile, shot just 37 percent from the field, made only 13 of 25 free throw attempts and got sub-par production from key cogs. Hedo Turkoglu scored 1 point on 0-4 shooting, Ryan Anderson was 3-8 (9 points) and though Dwight Howard had 15 rebounds and 12 points, he was 2-10 from the free throw line and only took 10 shots in 37 minutes of action.

Rookie sensation Kyrie Irving hit two free throws with 0.4 seconds left to beat the Kings, who have lost five straight games. The free throws came after Tyreke Evans inexplicably fouled Irving with less than 3 seconds left to play and Sacramento holding a 1-point lead. Kyrie scored 23 points, Antawn Jamison added 21 and the Cavaliers won despite giving up a 10-point fourth quarter lead. Evans compounded a rough night (5-17 shooting, 10 points) with the bad foul in crunch time, and it was rookie Isaiah Thomas who battled with Irving, not Evans—Thomas flirted with a triple-double, finishing with 23 points, 11 dimes and 8 rebounds. DeMarcus Cousins (19 points, 9 rebounds) gave SacTown the lead before Kyrie’s clutch foul shots dropped the Kings’ road record to 3-16 (10-21 overall). Cleveland is now 12-17 on the year and are in the midst of a 9-game homestand, longest in the team’s history.

Greg Monroe scored 17 points and had 10 rebounds, and the Pistons won despite shooting just 38 percent from the field as a team. Rodney Stuckey added 16 points (12 from the free throw line) despite shooting just 2-10 on field goals. Quietly, Detroit is red-hot, having won 7 of its last 9 games—oddly enough one of the Ls was to the Wizards. The Celtics were without Kevin Garnett, who missed the game citing personal reasons, and Boston turned the ball over 24 times, leading to 40 Pistons points. Paul Pierce led the team in scoring with 18 points, and Rajon Rondo had 10 assists, but only 5 points on 1-6 shooting. Since Boston is still without Brandon Bass, Chris Wilcox started in Garnett’s place, and he finished with 14 points and 6 boards. And perhaps the funniest nugget of any NBA game from last night was this, per the AP: “Rapper Flo Rida’s halftime show helped the Pistons sell out their first game since the home opener.”

Kyle Lowry continues to impress. He hit 7 of his 8 three-point attempts and scored a game-high 32 points, plus had 9 assists. Luis Scola chipped in 26 points and 9 rebounds, and the Rockets shot better than 51 percent as they improved to 18-14 on the year. Utah cut a double-digit lead to just two points in the fourth quarter, but Houston fought off a late run and handed the Jazz their sixth loss in their last eight games. Al Jefferson led Utah with yet another double-double, this time in the form of 23 points and 11 boards, and Paul Millsap had 22 points, but the Jazz shot sub-40 percent from the field, including 27 percent in the second half, when they scored only 8 points in the paint. The Rockets, meanwhile, were scorching hot in the second half, and rode a 16-4 run late in the fourth quarter to the win. Kevin Martin struggled again, with just 11 points on 4-9 shooting, but with Lowry scoring at will, Houston didn’t miss KMart’s production.

Kevin Love scored 12 of his 20 points in the fourth quarter, including the game-winning free throws with a tenth of a second left on the clock, and added 15 rebounds to help the Timberwolves beat the Sixers in an upset. Ricky Rubio scored a career-high 22 points, plus 6 rebounds and 5 assists—including one special delivery to Nikola Pekovic. Philadelphia, now 20-12 on the year, is 0-5 in games decided by four points or less, this time despite holding Minnesota to 39 percent field goal shooting and getting 20 points from Jrue Holiday (2 in Rubio’s grill). Pekovic finished with 17 points and 9 rebounds, and anyone watching the game learned a little more about the big man’s favorite things. Love’s big fourth quarter came after he started the game 2-15 from the floor and hadn’t scored since the first quarter. Andre Iguodala was the man who committed the costly foul on Love in the final second of the game—he finished with 13 points, 7 rebounds and 3 assists.

Forget Linsanity, it’s all about Ersanity now! On the night Brook Lopez made his 2011-12 debut, Ersan Ilyasova absolutely dominated the Nets’ forntcourt, crashing the boards like a maniac to the tune of 25 rebounds and 29 points—both career highs—and helping Milwaukee snap a four-game losing skid. The Bucks have now won 9 straight against New Jersey, the latest ruining Lopez’s return, in which he dropped 9 points on 2-for-7 shooting, and made just 5 of 11 free throws. Milwaukee went on a 15-4 run to open the second half, and while a 9-0 run from the Nets made it a five-point game with 1:07 left to play, Carlos Delfino hit a three with under a minute remaining and the Bucks salted away the game at the free throw line. Milwaukee is now 13-18 for the season, after holding the Nets to 34 percent shooting, including 22 percent from the 3-point line. Deron Williams scored 26 points for New Jersey, but MarShon Brooks had only 12 on 3-14 shooting.

Jared Dudley scored a season-high 25 points, Marcin Gortat added 21 points and 15 boards, and Steve Nash dished out 14 dimes as the Suns blew the Lakers out, improving to 13-19. Los Angeles trailed by as many as 27 and never cut the lead into single digits in the fourth quarter, despite 32 points, 7 rebounds and 5 assists from Kobe Bryant (he also had 10 turnovers). The Lakers got double-doubles from their two big men, as Pau Gasol had 17 and 12 and Andrew Bynum delivered 16 and 10, but L.A. turned the ball over 18 times and gave up a season-worst 63 points in the first half. Derek Fisher only took one shot in his eighteen minutes, and missed it, finishing with 0 points, 1 assists and 1 turnover. Of course, the big story of the game for the Lakers, now 18-13, was Kobe’s annoyance with the front office, and the rumors swirling about Gasol’s future in Laker Land.

If a player scores 50+ points in a game, or even 40, it’s probably the most important thing that happened that night. Same goes for a triple-double. Well, on this night, the Oklahoma City Thunder accomplished all three of those feats: Kevin Durant scored a career-high 51 points, Russell Westbrook scored 40 and Serge Ibaka notched a triple-double in points (15), rebounds (14) and blocked shots (11). It’s the first time in NBA history a trio has done those three things in one basketball game, together. The last time a duo scored 40+ in the same game was Mike and Scottie with the Bulls in 1996. (That Ibaka’s line will probably be overlooked due to KD’s big night is a shame, by the way. 3×2 with blocks!) Most importantly, of course, the Thunder won the game, snatching away victory from the Nuggets in overtime after Durant tied things up on a driving dunk with under 10 seconds left to play in regulation. Seven Denver players scored in double figures, led by 27 from Arron Afflalo and 21 points and 10 dimes from Andre Miller. The Nuggets scored an absurd 72 points in the paint, but gave up a 14-point lead and are now 17-15 on the year. OKC is 24-7, No. 1 in the West and is now a certified nightmare for teams on a nightly basis. Ready, set, discuss!

Line of the Night: On any other night, Ersan Ilyasova would have had this award on lock with his 29 points and 25 boards, but the Thunder stole the show. Take your pick from the OKC box score—Durant’s 51, Westbrook’s 40 or Ibaka’s 15/14/11-block triple-double.

Moment of the Night: KD sends it to OT with two of his 51 points.

Dunk of the Night: Plenty of candidates from last night, but these two stuck out for me. LBJ throws the ridiculous lob to DWade, and Russ weaves his way into the lane for the monster jam.

Tonight: Hopefully you have the day off to enjoy 11 NBA games, starting with Hawks-Bulls at 4 on ESPN. You can also catch a TNT doubleheader of Celtics-Mavs and Blazers-Lakers. Three other Western Conference matchups to keep an eye on include Grizz-Rockets, Spurs-Jazz and Nuggs-Wolves.