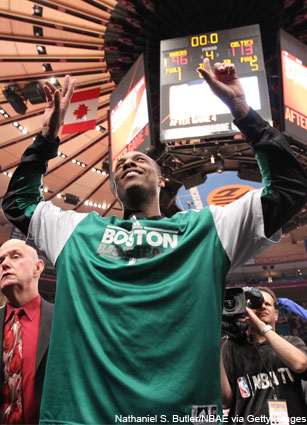 After their Game 2 loss in Boston, the Knicks’ locker room was surprisingly calm and almost confident. While frustrated, there was a sense of “We’re OK, they haven’t done a thing yet. Wait until we get them in the real Garden.”

Any hopes of a Swizzle-infused party were quickly put to bed by Paul Pierce, Ray Allen and Rajon Rondo who put the first nail in the Knicks coffin in their 113-96 dismantling of New York. Pierce led the charge with 38 points and Sugar Ray was right behind him with 32 points of his own. The two combined to shoot a staggering 25-37 from the field, 14-19 from three and hit about 13 back breaking daggers. And oh yeah, Rajon Rondo messed around and got a triple double with 20 assists. It was a good day for the Celtics.

The Cs took control of this one right from the start, exploding to a 22-5 lead behind 12 points from the Truth. The Knicks, behind a strong showing from their bench (23 first half points,) clawed back into the game. But then the third quarter the Cs smelled blood and went for the jugular, outscoring New York by 15 in the period.

Boston’s performance was undoubtedly helped by a New York defense that returned to form after some relatively competent defensive play over the first two games. What hurt the Knicks even more was the big pile of nothing they got from their big guns. Amar’e, limited by a troublesome back, was limited to 7 points and 3 boards and Melo shot just 4-16 from the field on his way to an uneventful 15 points.

Even if those two were on their game, and the Knicks dusted off Allan Houston and Larry Johnson, Boston still would have controlled this one. The Celtics simply executed at such a high level and never let their foot off the pedal.

At one point after consecutive threes by Mason pulled New York to 14 in the fourth, Boston went on a 10-2 run over the next two minutes behind threes from Allen and Pierce and an acrobatic lay in by Rondo. The plays were both a “nah son” to the Knicks and a message to the other Eastern powers that Boston is still here. — Jonathan Evans/@jre18

Philips Arena buzzed with anticipation as fans donned Playoff tees to form a sea of white. Joe Johnson came out aggressive, scoring 17 of his 21 points in the first half. The Hawks took a 51-42 lead into halftime, shooting 55 percent compared to 39 percent for the Magic. Dwight Howard scored 9 points on 3-6 field goals and 3-5 free throws. The Magic hoisted 14 threes, but made only four, while the Hawks had the same amount of makes on half the attempts.

The Hawks were held to 15 points on 5-20 field goals in the third quarter, but led the Magic 66-62 at the end of three. Neither team could pull away in the fourth and tensions ran high when Zaza Pachulia and Jason Richardson got into a scuffle after Pachulia fouled Howard on the previous play. After the foul, Howard made contact with Pachulia with a follow through motion, earning him a tech. Pachulia and Richardson were ejected with a little over two minutes remaining.

The highlight of the night came from Jamal Crawford, who hit an off balance three-point dagger with 5.7 seconds remaining to put the Hawks up 4. Crawford scored 12 of his 23 points in the fourth quarter.

Still no rest for Dwight as Howard logged just under 45 minutes. Hawks are up 2-1 and Game 4 is Sunday in Atlanta. — Tracy Weissenberg

Things settle in, regain normal form, reveal the uneven. Size and talent rarely fail when on the right side of a severe imbalance in coaching experience. We know how the rest of this will play out.

Kobe Bryant scored 30 points, channeling his intensity to lead a balanced attack that featured renewed aggression from Pau Gasol. The annual psychologizing of Gasol is far from done. While it remains one of the more boring debates of the postseason, we see again how terrifying the frontline of this era’s Lakers can be when given the ball and banging glass.

In yet another microcosmic outing, Andrew Bynum showed why he’s never been traded: powerful moves and a knee scare. Still, these are the Lakers that can beat OKC, Miami or the newly donut-shaped Celtics. Vintage Kobe and 4-6 All-Star quality bigs.

The Hornets refuse to get outworked. Yet the brief flight of Aaron Gray-as-unlikely-hero has come to ground. Carl Landry did his best, but the absence of David West’s ability to pull defenders out of the paint and be automatic from 15 feet shows against a good defense like L.A.’s. Pressuring Chris Paul works when he doesn’t have his go-to goes and the bench goes cold again (9-34 in the last two games).

Who knows? Maybe L.A. decides to take it easy and cough up Game 4. But it looks to me like Kobe and Phil looked at what’s going on in Chicago and Miami and OKC and realized that they better start laying out the good shit now and get momentum. Certainly they have the wheels to ride. — Toney Blare