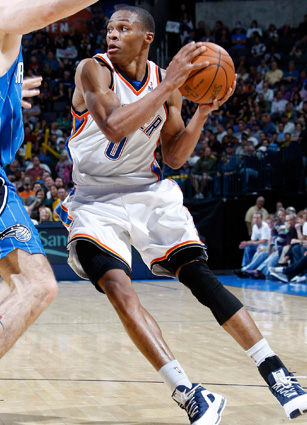 Want to know how spoiled we as a basketball-watching whole are?

He flirts with a triple-double at the Garden before finishing with 33 points, eight rebounds and nine assists and we say we thought he’d have a bigger game.

Kobe Bryant. 31 years, 75 days old when he becomes the youngest player in NBA history to reach 24,000 career points. 40 points in three of his last five games. 26 points at the half last night against the Hornets. His Lakers at 6-1 despite Pau Gasol not playing yet this season and Andrew Bynum being out with a strained right elbow.

41 points, on zero three-pointers, and only three made free throws.

Yes, we are spoiled indeed.

While Melo started out his season strong, his Nuggets have died on the end of their road trip, getting blown out in Miami and then again in Atlanta. While we’re talking about blowouts, we’ve got to mention Golden State. Wow. Losing by an ungodly amount to the Clippers then falling to a Kings squad that was without Kevin Martin (who, by the way, is not a soft player) and led by rookie Tyreke Evans, no wonder everyone wants out. I just want Don Nelson to free Anthony Randolph.

There isn’t anything nice that I can say about the Knicks, so I won’t say anything at all. Okay, I’ll say this: the Garden deserves a professional basketball team.

And, um, if you’re a Hornets fan, I really feel for you. Losing huge to the Lakers, okay, the Raptors, ouch, but giving up 117 points to the New York Knicks?

Someone save Chris Paul.

I think it’s too late to save Byron Scott. It hurts to see Paul’s wizardry with the ball being wasted on clanged shots, defensive meltdowns and games that are lost before the third quarter is over. I really didn’t see this awful start for the Hornets, but I keep telling myself it is very early.

Then when I get really down thinking about the Hornets wasting Chris Paul’s talent, I think about the Suns and 35-year-old Steve Nash who is balllllllin, averaging 19 points per game to go with the league-leading 11 assists. Grant Hill averaging 13 points and eight rebounds per game. Jared Dudley who has become one of my favourite energy guys (thanks, in large part to his Twitter account), and Channing Frye for being a lovely surprise. The Suns are 6-1 and have taken down the Celtics at home. Who is to say they can’t keep it up?

The other surprise for me has been the Heat. Wow. Q Rich is like a new man out there. About 2/3rds of the man that he was at the end of last season, in fact. He’s slimmed down a LOT, dropping a ton of weight during the offseason and he looks reinvigorated, happy and comfortable playing with Dwyane Wade, Dorrell Wright –his”135″ team– and the rest of the Miami roster. I really thought the Heat would open the season floundering, but they look like they’ve had time to gel and everyone appears to be on the same page. Gotta give a shout out to Udonis Haslem for being a co-captain, embracing his move to the bench and also going out every night with the same intensity as before and still managing to wrangle in double-doubles for his team.

Now for the biggest game of the weekend, at least in my eyes. After losing in OT to the Lakers, the OKC Thunder finally got their big win against a “big” team, demolishing the Orlando Magic 102-74. Yes, Orlando was without Vince Carter and Ryan Anderson, but still. Huge win for the young Thunder. KD had 28 points while Russell Westbrook had 17 points and 10 assists and Thabo Sefolosha added 13 points and 10 rebounds. JJ Redick was 2-11 from the floor and 0-6 from beyond the arc. Dwight finished with 20 points and seven rebounds. Zero blocks, killing my chance at salvaging my fantasy matchup this week.

And as I’m writing this, ESPN publishes a report that Stephen Jackson’s agent has ripped Don Nelson. Wow. Check this one out, although I’m sure Marcel will have you hooked up w/ the latest. What a mess in the Bay. Someone rescue the Warriors. STAT.

Also, Brandon Jennings is back on Twitter. Yay to that. Here’s to hoping he sticks around and can enjoy it to interact with his friends, fans and fellow NBAers the way so many other players have.

I haven’t even mentioned that Chris Douglas-Roberts was diagnosed with H1N1 this weekend, but have no fear, he’s still fly. How do I know? He told us via his Twitter account.

And to end this on a more serious note, I’m thinking of Allen I. today. Whether his absence from the Grizzlies is a personal matter or a professional one, whether he is back tomorrow or fades into the NBA background, I will forever be thankful for the joy I’ve been given watching this special, special player excel at the game we both love.

We’ll have more of a standard format tomorrow, I just had too many thoughts swirling in my brain this evening/morning. Tell me yours, as we approach the two week mark.

As I was saying, blowouts or not, we’re spoiled. Make sure you’re enjoying this game, because there truly isn’t any better.