The Warriors make history at 16-0, plus Paul George drops 40, the Clippers get a much-needed win and more from Tuesday's NBA action. 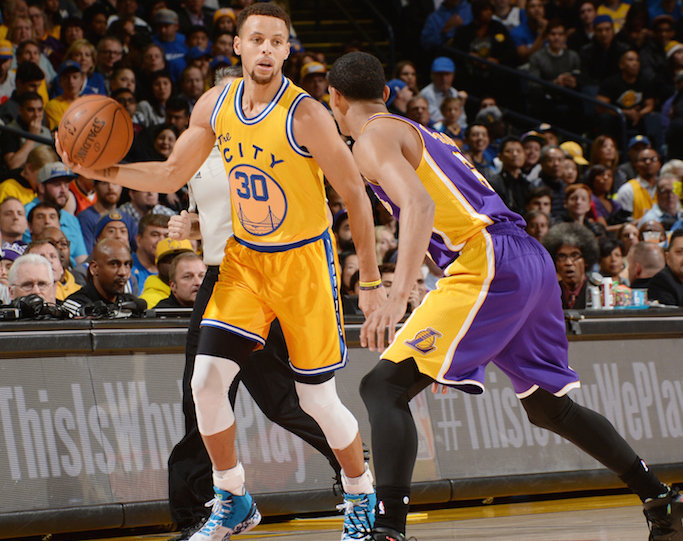 You should have already known this, but Paul George is officially BACK. He put 40 points on the Wiz, including 7 treys. He had some help from the homie CJ Miles, who hit 8 threes and scored 32 points. Indiana shot 73 (!!) percent from downtown in this game, which is totally insane. Are the lethargic Wiz close to panic mode?

ATL came in losers in 4 of their last 5, so this was a get-right game that they desperately needed. The Celtics at one point closed the deficit to single-digits, but an 18-3 Hawks run that put them up 20 in the fourth quarter wrapped this one up. Jeff Teague scored 16 points and did this:

Seven Grizzlies players scored in double figures, including Mike Conley with 21 and yes Mario Chalmers (14 points, 5 steals) as Memphis dealt the Mavs a second straight L. Didn’t help that the Mavs scored a season-low 36 points in the first half—and opened the second half by watching the Grizz go on a 10-2 run. Was never really close after that.

Danilo Gallinari had a ridiculous 20-18-3 line but Lob City snapped a 3-game losing skid. DeAndre Jordan had 18 points, 11 boards and 4 blocked shots, but made just 12 of 25 free throws after the Nuggs started going to the Hack-a-DJ strategy late. Besides that ridiculous Blake Griffin alley-oop three-pointer, this was the coolest play of the game, courtesy of J-Crossover:

The Blazers had the ball down three with 11 seconds left, and CJ McCollum actually got what looked like a pretty clean look off a high screen, but instead he pump-faked and tried to draw a foul call on Joakim Noah. But no whistle came and the Bulls got a nice road win. Pau Gasol had a double-double, and Jimmy Butler led all scorers with 22, including these 3:

Golden State is alone in the record books. Best start ever. 16-0. Really, really impressive no matter how much the trolls want to troll. On this night, the opponent was admittedly the equivalent of a walking trash can emoji, but the Dubs took care of business from start to finish. Not really comparing them (because, come on) but since they are the two biggest stars… Steph: 24, 9 and 4 with zero turnovers. Kobe: 1-for-14 shooting, 4 points, 3 turnovers.