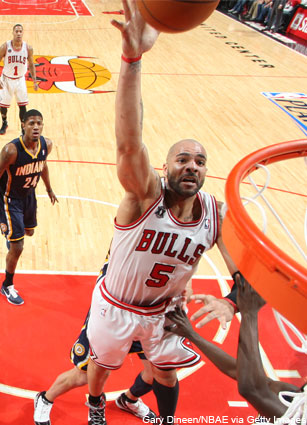 Not to name drop, but I had the pleasure of watching Game 2 sitting side by side with the one and only Scoop Jackson at the United Center last night. Scoop is my guy, and he’s one of those dudes who you can have a conversation with during a game and not miss any of the action in the process.

Sometime around the middle of the third quarter, after discussing a myriad of topics, we started to talk about players who seem to have a knack for “willing” their team to victory. I won’t give you the list of names that we came up with or who was and wasn’t on it, but I will tell you that it was irrefutable, and Derrick Rose definitely made the cut.

His “will” was on display once again as Chicago found themselves in a similar situation as Game 1, playing from behind against a Pacers team that has absolutely nothing to lose and everything to gain. And yet despite another valiant effort, Indiana was once again stifled by Rose, his amazing play in the biggest of moments, and by the play of his teammates – specifically Carlos Boozer and Joakim Noah – who stepped up and made big plays down the stretch as well.

The Pacers now find themselves down 0-2 in the series and what’s worse, possibly down a starting PG in Darren Collison – injured ankle – as the scene shifts to Indianapolis for Games 3 and 4.

If it isn’t clear by now, Indiana is certainly a lot better than their regular season record suggests. But after giving Chicago their best punches in two consecutive games and still not being able to come away with a victory, I won’t proclaim this series over, but it’s petty damn close. – Bryan Crawford / @_BryanCrawford

The Sixers’ Game 1 loss left them feeling like they could hang with the Heat. Last night’s defeat might have changed their minds.

Chris Bosh, who added a double-double, scored the game’s first points and Miami never looked back. After two quarters, the ice-cold Sixers trailed 49-31. LeBron James bounced back from his poor shooting in Game 1, to shoot 52.6 percent from the field and drop 29 points, 7 rebounds and 6 assists. James even put Jrue Holiday in his second poster of the month with a sick second quarter alley-oop.

The Heat, once known for blowing large leads, kept the Sixers at arm’s length throughout the contest with stifling defense. A defense so stifling that it only allowed 29 points from the Sixers’ starting five, including 5 from Andre Iguodala and 3 from Elton Brand.

Dwyane Wade showed little ill-effects from the migraine headaches he suffered over the weekend, as he played 34 minutes and scored 14 points. The Sixers were out-rebounded once again, 46-40. But the free-throw margin was not as wide as Game 1, as the Heat only shot 9 more free throws than Philadelphia.

Thaddeus Young and Evan Turner chipped in 18 and 15, respectively. But Young missed multiple layups due to Joel Anthony’s defensive presence. And Turner was continually torched on the defensive side by Wade and James.

If the Sixers hope to have any chance of winning a game in this series, they will have to shoot better than 34 percent from the field and score more than 8 fast break points. But after two games, it doesn’t look like the Heatles have any intention of letting up. — Cris Jones