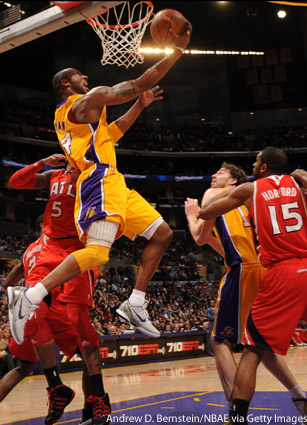 It’s trade season, guys and gals, so eat up the rumors and updates at your own will. But it’s also basketball season, so, you know, I’m here to talk hoops. Cool?

An inefficient offense usually provides an opponent with a flurry of fast-break opportunities, which didn’t bode well for the Wizards and their 39.8 shooting percentage. The Pacers capitalized to the tune of 26 fast-break points, winning easily in Washington and holding onto that eighth spot in the East. Danny Granger led the Pacers with 21, while Andray Blatche scored the same for the Wiz, who now sit at a depressing but nicely even 15-40.

The Bobcats are fighting for a Playoff position and rumored to be trading/attempting to trade their two biggest pieces—Gerald Wallace and Stephen Jackson—so this victory was a nice get before the distractions are revved up in the coming few days. The bad news is that the aforementioned Jackson went down in the third, returning a few minutes later to the bench—but not the game. That could have (hopefully) been for precautionary measures, though, as the contest was well at hand by the beginning of the fourth. One guy not leaving Charlotte is DJ Augustin, who continued to play well with 23 points and 8 dimes in the easy win.

The Rockets got some unlikely assistance from rookie Patrick Patterson, who scored 20 points in 21 minutes and helped his squad overcome the struggling Pistons. Since little else of super importance went down in this one (though, props to Greg Monroe, who went for 12 and 12 and keeps pushing forward), I’m using this space to politely ask: Can we get Richard Hamilton a new home? Please? Dude is way too talented to be toiling away on the Detroit bench. Regardless, at least one of these teams will probably be dealing in the next few days, with names like Shane Battier, Aaron Brooks and Courtney Lee already mentioned in various trade rumors.

Despite the distractions presented by All-Star break and their (to-be?) competition making a big move a few days back, the Heat were able to stay focused last night, easily taking down the Kings at home. LeBron James, Chris Bosh and Dwyane Wade combined for 76 points, and Mario Chalmers chalmed, er, chimed in with 14 points off 6-7 from the field. Miami now has some tough ones coming up, with the Bulls on Thursday and the newly-updated Knicks on Sunday.

Blake Griffin returned to Oklahoma City and showcased his skills—28 points, 11 boards, 8 assists, this—but his teammates didn’t do the same, as the Thunder ran all over the Clips in OKC. Jeff Green and Kevin Durant combined for 43, and a huge first-into-second-quarter run put Oklahoma City up big early on. The Thunder are now off to San Antonio, while the Clippers are in New Orleans tonight.

He’s been “back” for a minute, but between the limited minutes and the natural rust that comes after returning from an injury, it hasn’t felt like Brandon Jennings has been back since he was sidelined for a good piece of the season. Until last night. Playing 45 minutes, Jennings scored 27, distributed 7, and hit a handful of clutch free throws to solidify the close win for the Bucks. The TWolves had their chances, including an opportunity down three and with the ball, but a missed Kevin Love top-of-the-key J all but sealed things up. Speaking of Love, his 20-17 effort gave him his 43rd consecutive double-double (!), putting him just one shy of tying Moses Malone’s record (since the ABA-NBA merger) of 44.

Playing without the superstar(s) they traded away, and without the variety of players they traded for, the Nuggets managed alright, stomping a Grizzlies group trying to compete without injured star Rudy Gay. JR Smith held it down for the Nugs, dropping 26, while Ty Lawson and Arron Afflalo each pitched in 21. It’ll be interesting to see where Denver moves from here, because (by my count) they now have five (Smith, Afflalo, Danilo Gallinari, Wilson Chandler, Al Harrington) capable swingmen, which could lead to a bit of an overcrowded rotation. In the meantime, the Grizzlies, simply put, aren’t the same team without Gay, which greatly lowers the odds of an impending Playoff push. Unfortunate.

A lot of people were curious as to how the Lake Show would come out after the All-Star break, after the pre-ASG loss to Cleveland and the speculation that these are simply not the same Lakers. Well, thanks for the concern, but they came out just fine. This one was pretty much a wrap by halftime, when L.A. was up 54-33 after a monster first two quarters. Only one Laker starter (Pau Gasol) played more than 30 minutes, and every player on the squad scored at least a single point in the tilt. So yeah, the Lakers don’t appear too phased by their struggles of last week and earlier. As for the Hawks, with the Knicks seemingly ready to do some damage (well, at some point, at least), they’re gonna need to step their game up, and do so quick, if they’d like to hold onto that fifth spot in the East. Just a thought.

After Miami’s win earlier in the night, the C’s needed to a victory to hold their spot atop the Eastern Conference. And it wasn’t easy, but they got it done, battling back-and-forth with the Warriors during the first half and then jumping ahead in the second. On his 25th birthday, Rajon Rondo controlled the ball and the game, scoring 19 and dishing 14, while Kevin Garnett led the team in scoring with 24. The W gives Boston an awesomely palindromic 41-14 record and positions them barely ahead of the Heat’s 42-15 mark, and to maintain that location the Celts will have to hold their ground again Thursday night vs. the Nuggets.