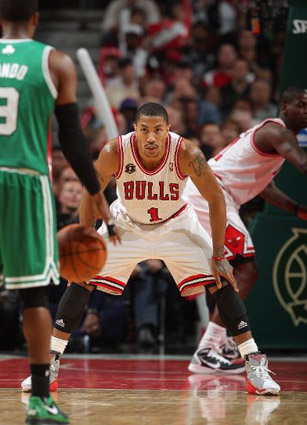 Even with a hold on the top spot in the standings, most seem to still t00 be thinking of the Bulls as some sort of fad, one that’ll be over by the time the Eastern Conference Finals rolls around. Last night might change that. With a hell of a statement game, Chicago rolled past the Celtics—who, it should be noted, are about as healthy as they’re gonna get—holding them to 81 points on 38.4 percent shooting from the field. Naturally, Derrick Rose took the forefront and led the Bulls with 30 (plus 8 assists, 5 boards and 2 steals), in a contest that might’ve also acted as his definitive Yeah, I’m the MVP moment. Luol Deng added 23, while Carlos Boozer scored 14 and grabbed 12.

Quick note on the MVP race before moving on: What else can we ask DRose to possibly do? I understand the argument that his team’s success stems largely from their defense, and not so much from their offense, where he’s absurdly dominant and his earned his reputation. But as the starting point guard, the dude is playing around 38 minutes a game, half of which he spends on the defensive end. Not to mention that the NBA is more pg-dominated than it’s been, maybe ever, meaning he’s often responsible for holding down the opposition best (or at least most important) player.

Anyway, after putting his squad on his back and carrying them right through one of the L’s toughest opponents, DRose used his post-game presser to respond to the stat-obsessed critics who still don’t see him as the MVP. Here it is:

Alright, maybe he didn’t. Either way, the Bulls now have a clear path toward the top seed in the conference, which they’ll clinch after winning any of their next four games. The first of those four comes tonight, in Cleveland. Hey, at least Cavs fans should’t be too humiliated—chances are they’ll be rooting for Chicago to take down that LeBron dude at some point during the next few months.

Perhaps the only heated seeding battle in the League these days is taking place out West, where the Blazers and Hornets are fighting for the right to not have to play the Lakers (the potential two seed) in the first round. Portland jumped ahead of NO by a half-game last night, defeating the Jazz relatively easily in Utah. Gerald Wallace led all scorers with 29, and though LaMarcus Aldridge had an off shooting performance (6-19 from the floor), he still provided 12 points and 11 boards. Devis Harris led Utah with 26 points.